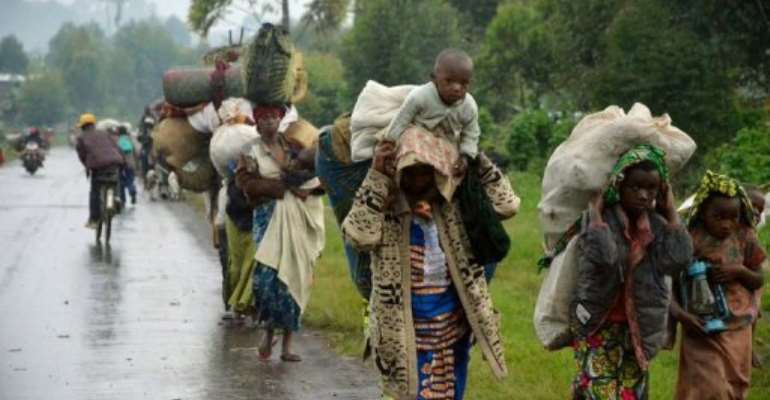 Mutineers in DR Congo have told AFP they belong to a new military group, the March 23 Movement. By Junior D.Kannah (AFP)

GOMA, DR Congo (AFP) - The army in Democratic Republic of Congo was Friday engaged in heavy fighting in Nord-Kivu province with mutineers who have formed a new rebel force, the rebels and a government official said.

"The clashes are going on at Bunagana. We are six kilometres (four miles) from the town of Bunagana," a mutineer who was formerly a member of the rebel National Congress for the Defence of the People (CNDP) told AFP.

The fighting broke out on Thursday night close to the eastern border with Rwanda and Uganda.

"The situation is bad. The mutineers are close to Bunagana town. Residents who spent the night in Bunagana left this morning for Uganda," said an agent of the government's intelligence service based in the town.

"We are still in Uganda. There is no means of going home because of the clashes. We can still hear the sound of heavy weapons fire," said a Bunagana resident who fled on Thursday night with his wife and children, whom he described as "traumatised".

Mutineers questioned by AFP said they belonged to the March 23 Movement (M23), a new military group formed by ex-members of the CNDP and led by Colonel Sultani Makenga, who deserted on May 4 with several dozen men and holed up in the Rutshuru territory near the border.

The mutineers said they wanted the full implementation of a peace pact signed in 2009, when they were incorporated into the national army.

Overnight Thursday, heavy fighting took place at Runyiony, near Bunagana, and on the edge of the Virunga National Park, where the former chief of staff of the CNDP, General Bosco Ntaganda, is believed to be located.

Also known as the "Terminator", Ntaganda is wanted by the International Criminal Court in The Hague on a war crimes charge of enlisting child soldiers.

He is also now wanted by the Congolese government, which holds him responsible for the outbreak of fighting between troops and mutineers in the east.

A military spokesman said Thursday hundreds of mutineers had come back to the army, as a deadline loomed for them to fall back into rank.