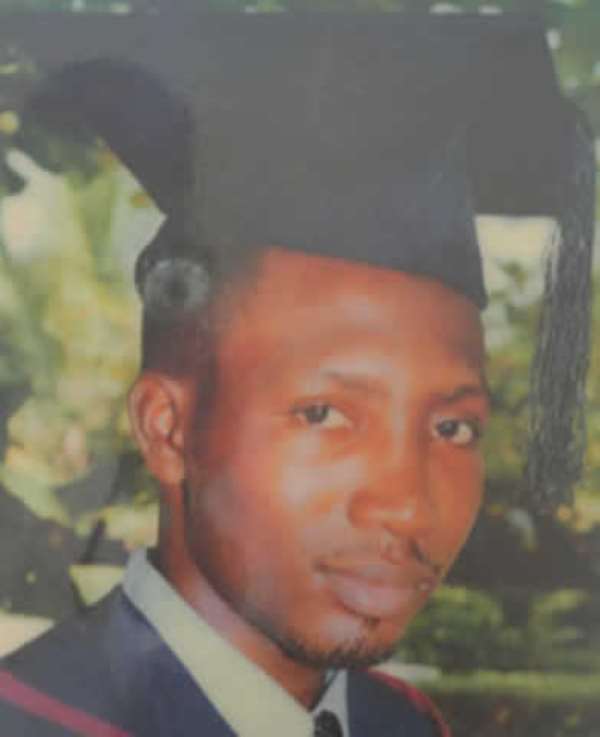 Media reports last week suggesting the murder of a 25-year-old business administration graduate from the Islamic University, Sheriff Mohamed at Fadama was politically motivated is causing consternation amongst his family, a family associate told The Al-Hajj last week.

Until his untimely death on that fateful Sunday, Sheriff Mohamed has been the Constituency Secretary of the New Patriotic Party (NPP) for the Okaikoi North constituency and was allegedly attacked by two men, assumed to be his political opponents.

However, cautious investigations conducted by this paper may be proving otherwise as facts emerging points to a clear case of banditry that turned sour.

“frantic attempts at politicizing an apparent criminal conduct carried-out by suspected men of the underworld and linking it to imaginary 'political opponents' in other to score political points is becoming a source of uneasiness to the grieving parents of deceased”, a family source disclosed.

Though, it is an established fact that the late Sheriff Mohamed and his father are both active members of the opposition New Patriotic Party in the Okaikoi North constituency of the Greater Accra region, family source close to his dad, Mr. Mohamed says “whiles we the family may not rule-out foul play, we nevertheless don't want the death of our beloved son to be politicized, especially as the police are yet to conclude investigations”.

He added that, “we are first and foremost Muslims who believe in Allah's destiny for each and every one of us here on earth. He gives and he takes, but whosoever is responsible for the cruel and unjust murder of our son should be made to face the full rigous of the law when apprehended”.

However, information pieced together by The Al-Hajj indicates that on that tragic evening the late 25-year-old business administration graduate went out to buy beverage when he was suddenly chased and stabbed by unknown people suspected to be armed robbers who wanted to rob him of his mobile phone.

The unidentified assassins, another source disclosed; unable to seize the phone from the deceased, and after the gory act, bolted upon sensing people approaching.

Sheriff Mohamed was rushed to the Lapaz Community Hospital and later referred to the Korle-Bu Hospital where he was pronounced dead on arrival.

The deceased has since been buried in line with his Islamic custom and tradition.

The Daily Guide newspaper last week reported how NPP Parliamentary candidate for the constituency, Mr. Patrick Boamah disclosed on Oman FM that the deceased's father, a staunch member of the New Patriotic Party had earlier prevented a busload of female head porters popularly known as kayayei from Agbogbloshie, from registering in the constituency.

This according to the NPP MP did not go down well with the sponsors of that deal and went further to state that one of them told the father of the late Sheriff Mohamed that he would see.