You Took The Glory Mr President; Now Take The Responsibility!!! 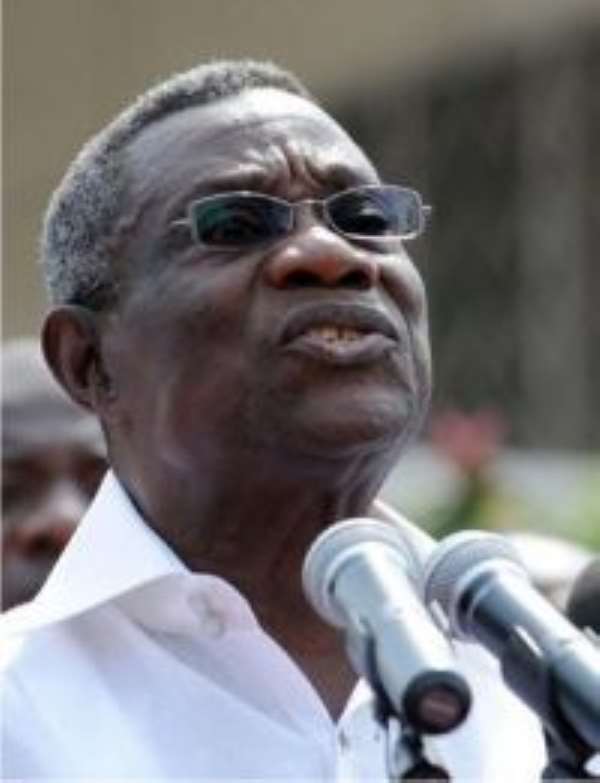 It is said that “uneasy lies the head that wears the crown” but it is funny how some people seek to enjoy the trappings of their positions and yet shirk their responsibilities like bubonic plaque? Quite interesting indeed; isn't it? Be it cowardice that makes those men and women behave the way they do or that they are hopelessly useless in the position they got themselves into is another matter. Our society is awash with examples of men who go to any extreme to woo a lady. Such vain men would even sell off their soul to meet the demands of the lady. When the woman eventually says “yes”, such men take pride and glory in walking around town to show off their new catch for everyone to see. However, as soon as the woman gets pregnant, you then see some of these men take cover with the excuse that they were not responsible for the woman's pregnancy. It is only then that reality dawns on the lady who has been so scammed to realise the mistake they have made but then, it would have be too late. The woman would have entrusted her heart in the hands of the devil incarnate and would have suffered untold hardships for that one mistake for life. Such victims are often left to fend for themselves with the father of their child nowhere to be found.

The above is a common occurrence in our society and would resonate with readers. As encapsulated in the scenario above, some of our politicians have also been toying with the destiny of Ghanaians just the same way. Our politicians promise us heaven on earth when they seek power. Many put on the cheese-will-not-melt-in-my-mouth mask but hurriedly abandon us to our fate as soon as they get our votes. They go to any extent to get the votes of the electorates but when they get the power; their true character and real intent come to the fore. I know some dimwits would put a political twist on this write up but who cares. Incidents which have characterised the biometric registration do not bode well for December's elections. This piece is a cry for the security and unity of mother Ghana and not for any political party. However, since Prof Mills happens to be our President and the Commander-in-Chief of our security forces and under whose watch these incidents are occurring, he will invariably be the target of my lamentations and scourge. The President is enjoying all the courtesies and the trappings of his office yet seems incapable to take on the responsibilities that go with the august position he occupies. I do not intend to recount the promises President made to us when he sought our vote before 2008 elections. As per practice, he was sworn in with pomp and pageantry. I remember him grinning from ear to ear as he fumbled his way through his swearing in. Prof Mills pledged to protect the constitution and the sovereignty of Ghana. He promised to “…do good to all manner of persons”. Our President said to us that he was going be a “father for all” but today, the opposite is true. Prof Mills doesn't seem to care about us after all. It's now clear to me though why former President Rawlings christened Prof Mills as Konongo Kaya”. Legend has it that, the proverbial “Konongo Kaya” though a weakling; was always the first to lay claim to any available job to cart a load from one destination to the other. Being a weakling, it took him literally the whole day to complete one task thereby delaying the journey of the owner of the load to get to his/her destination on time. In the end, “Konongo Kaya” would have also denied other people “Kayas” the opportunity to do the job that the former had struggled to complete and also end the day not making any profit having lost the opportunity to get other potential jobs. Former President was indeed prophetic by giving Prof Mills that description. The President as if by design is indeed behaving just like “Konongo Kaya”. Prof Mills have left us to our fate to fend for ourselves with the on-going biometric registration.

I really fear for the peace of our land with the numerous reports of chaos and mayhem which have characterised the biometric registration exercise in some constituencies in the Ashanti and Greater Accra Regions. The President is behaving as if nothing is happening in the country. He has unleashed his Rottweilers on Ghanaians which have left tsunamaic (my own coinage) devastation in their trail. Ghanaians were butchered in broad daylight at Agbogbloshie market after the 2008 elections but not a whimper came from the President. We've had terrible experiences in Cheriponi and Akwatia by-elections under this President and till date, no one from either side of the political divide has been reprimanded for any wrong doing. A malfunctioned so and so was seen shooting his gun in broad day light at Cheriponi but nothing happened to him. Then came the pandemonium unleashed on hapless Akwatia citizens by Baba Jamal and his bunch of brainless goons. Yet again our President conveniently chose to play the ostrich. These and many other incidents send shivers down my spine when I hear of the devastation being caused by the likes of Nii Lante Vanderpuye at Odododiodioo constituency. Has the President not heard about the antics of this nasty piece of work right under his nose in Accra? Nii Lante Vanderpuye is conducting an ethnic cleansing in Odododiodioo constituency right in the capital whilst our President was playing to the gallery in Senegal that he “…seeks no power tainted with blood”. Then also is the reported rampage caused by NDC hoodlums in Fadama. Tain in the Brong Ahafo Region is in flames. Well Mr President, you said you don't “seek power tainted with blood” but in Bekwai in the Ashanti Region, Justice Opoku an NDC psychopath shot an innocent 12 year in his manic attempt to prevent people from registering. One Sherriff Mohammed was killed in Fadama whilst in Tafo-Pankrono in Kumasi, a certain “Dzigbordi” and his gang of buffoons are causing mayhem in various registration centres. You heard me right reader! A certain “Dzigbordi” causing mayhem in Ashanti Region!! If Ashantis were to copy the stupid blueprint of Nii Lante Vanderpuye and his drug infested geeks, where would the “Dzigbordis” and other non-Asantes end up in the Ashanti Region? And the bigger question is: If all these are happening and the President is not lifting a finger, then how is Ghana going to end up after the December 2012 elections? Nii Lante Vanderpuye is a Presidential Staffer at the castle yet our President has not even coughed at him. I'm neither a pessimist nor prophet of doom but my heart really bleeds for Ghana! I shudder to think of what awaits us in December. Please dear Lord have mercy on our country.

The problem with President Mills is he engages in so much unnecessary sanctimonious sermons without acting. He hides behind an avalanche of pious words and appears frightened to act in the face of mounting adversity. This is the same President who is so quick to sing his own praise whether real or imaginary. Readers have not forgotten how he cheekily awarded himself 80% after few months in office. Shortly after that, the Prof Mills sung his own glory again when he said in 2010 that his government has performed “…much better…” Again readers would recall Prof Mills' “I am the only President in Ghana” admonition. Only recently, the President was in America talking of his government's so called “unprecedented achievements”. In the midst of the chaos and pandemonium being meted out to Ghanaians in various regions by his own people, the President only had this say to the media on Thursday, 05.04.12: “…The power to elect a leader rests with the people and not within anybody else. You cannot force anyone on the people so let's make sure the people are given a free atmosphere within which to vote and make their choice.” My question to the President is this: Whose responsibility is it to provide “free atmosphere” for the electorates to “…vote and make their choice”? It is obvious to every Ghanaian which group of people are denying others from registering. The President almost always appears unable to diagnose what goes wrong in the country especially when it comes from within the rank and file of NDC or people around him. Prof Mills said that, “…the most important thing is that we must all vote in a rather peaceful atmosphere. We want Ghana to be peaceful before, during and after the elections.” Yes Mr President, we all want Ghana “to be peaceful during and after the elections” but I'm afraid the onus lies on you to provide that “peaceful atmosphere”. In fact it is your sole responsibility and our constitution mandates you to protect the unity of the country as you inherited. It is baffling how Prof Mills speaks in singular pronoun “I” when he wants to tout his own “achievements” but uses the collective “we” where he is required to take responsibility or initiate an action. Either the President lacks the desire and the wherewithal to act or that he is frightened of something Ghanaians do not know. The President should know that power and glory goes with a massive responsibility and the earlier he begins to act as such, the better it will be for Ghana. As things stand now, the country appears to be splitting at the seams.

On the 6th of March this year, President showcased the so-called “Special Forces” on parade but so far, the ongoing thuggery at the various registration centres has been met with deafening silence from the castle. If the Special Forces as per Asiedu Nketia's prescription are to be used to attack the opposition during the elections, then God help my beloved motherland. I hasten to pronounce though that should anything happen to Ghana during the elections, Asiedu Nketia and his ilk can run but would not be able to hide their skeletal frames behind the Special Forces. I want President Mills to remember that Hosni Mubarak, Laurent Gbagbo and Muammar Qaddafi had better forces. In deed Qaddafi had handpicked his forces from own tribe and equipped them for 42 years with better weaponry Ghana could only dream of but the “rats from Benghazi” (as Qaddafi used to call them) chased him and his forces out. This is the time for President Mills to take responsibility and act accordingly. He should deal ruthlessly with anybody perpetrating any form of needless anarchy at the registration centres. It is not too late to redeem the situation but if the President fails to act, then he will one day answer to his maker. The book of Esther chapter 4 verse 14 says: “For if thou altogether holdest your peace at this time, then shall enlargement and deliverance arise to the Jews (Ghanaians) from another place; but thou and thy father's house shall be destroyed; and who knoweth whether thou art come to the kingdom (presidency) for such a time as this?”(KJV). The ball is in your court now Mr President.