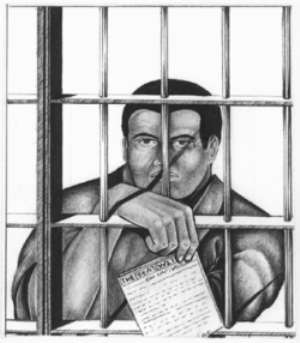 Kumasi, March 21, GNA - A Nigerien commercial driver who stabbed a colleague driver in the chest, ribs and abdomen has been sentenced to nine years imprisonment by a Kumasi Circuit Court.

Yussif Yakubu pleaded guilty to the charge of causing harm.

Police Inspector Kwabena Oduro Boateng told the court presided over by Justice William Boampong that the complainant, Abubakar Abdallah, and the convict used to be good friends and live at Aboabo in Kumasi.

For some time, relations between them had been cold and that they even refuse to speak with each other.

On February 26, the two met at a drinking spot and without provocation, Yakubu hurled insults on the victim.

Abdallah would not take that and a fist-fight ensued during which, the convict drew a knife and stabbed him in the left ribs, chest and abdomen.

He bled profusely from the wounds and was rushed to the Komfo Anokye Teaching Hospital (KATH) for treatment.

The prosecution said Abdallah was on admission at the medical facility for about a month.

A formal report was made to the police and Yakubu was arrested.

He admitted the crime in his caution statement.
GNA