Martin puts N.Zealand on top in Test against S.Africa 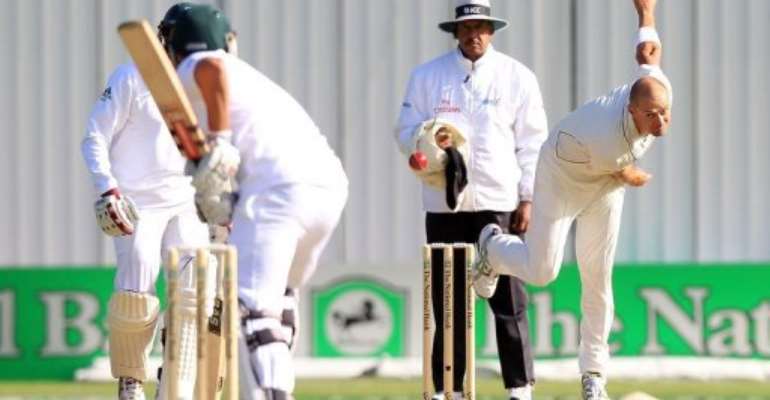 The Proteas ended the day at 191 for seven, with Jacques Rudolph (46) the only recognised batsman left after skipper Graeme Smith and Hashim Amla scored half centuries but the rest of the line-up failed to fire.

South Africa trounced New Zealand in the limited overs series and the Test looked to be heading the same way before Martin triggered a collapse that saw six wickets fall in the final session of a rain-shortened day in Dunedin.

With almost four hours of play lost to the weather, New Zealand captain Ross Taylor looked to have made the wrong call sending South Africa into bat after winning the toss, as the Black Caps' attack struggled in the first session.

South Africa were 86 for one at tea, with Smith notching his 31st Test 50 and Amla looking settled on a flat, lifeless pitch that yielded only one wicket, Alviro Petersen (11), for New Zealand's bowlers.

But Taylor's gamble paid off spectacularly when the clouds cleared and Martin dismissed Smith for 53 in the first over after the break, the batsman driving the ball to debutant Rob Nicol at cover as he attempted a boundary.

Martin struck again in his next over, dismissing Jacques Kallis for a duck when the batsman nicked the ball to Taylor at first slip.

AB de Villiers became scalp number three in the next ball, trapped lbw for a golden duck when the delivery nipped back sharply, skidding past the bat and crashing into the batsman's pads.

De Villiers called for a television review, which backed the umpire's decision and sent the despondent South African trudging back to the pavilion with the Proteas reeling at four for 90.

Martin could not manage a hat-trick when Rudolph came to the crease but his devastating spell lifted the Black Caps, who suddenly looked sharper in the field and more threatening with the ball.

Amla kept his cool to steady South Africa, grafting out a valuable 66-run partnership with Rudolph to post his 22nd Test 50.

Doug Bracewell thought he had the batsman caught and bowled on 56 but a television review showed the chance fell just short of the diving bowler's fingers.

However, Amla was dismissed in the next over, mis-hitting a Daniel Vettori delivery and sending the ball looping to Taylor in the slips.

Mark Boucher (4) faced only two balls before being run out when Rudolph, on strike, took off for a single, only for Bracewell to fire the ball back from the field to South African-born keeper Kruger van Wyk, who broke the stumps.

Rudolph then survived a huge lbw appeal from New Zealand on 32 when replays showed Bracewell overstepped the line before releasing the ball.

The bowler made amends in his next over, coaxing an edge from Dale Steyn to the slip cordon which richocheted off Martin Guptill's hand but stayed in the air long enough for Taylor to snatch the chance.

The Proteas will hope Rudolph can combine with the tail enders to post a competitive total to keep alive their dream of a clean sweep in the three match series, which would see them take top spot in the ICC world Test rankings.