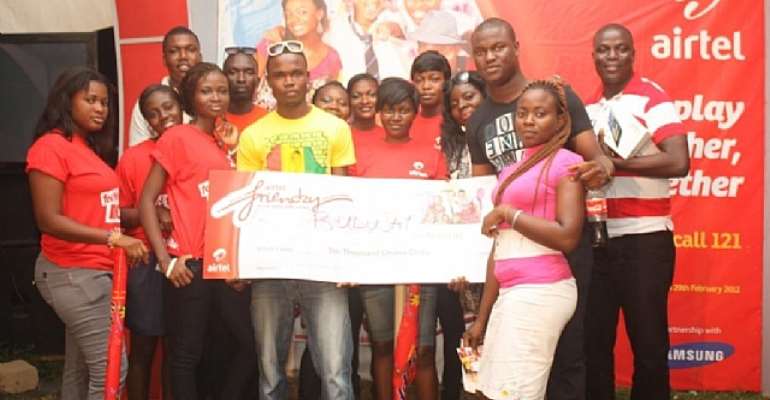 Accra, Feb. 21, GNA - Airtel Ghana has presented a cheque of GH¢10,000 each to the 7th and 8th weekly winners of the ongoing 'airtel friendzy' promotion in Accra.

The groups include HOCK90 and Budujay1.
So far, Budujay1, winners of the 8th weekly draw, is the only group that has had the highest points accrued since the promo started in December, 2011.

The promotion, which started last year and scheduled to end in the first week of March is aimed at giving back to customers by rewarding them for their recharges and usage on their network.

It is also to celebrate friendship as participants are encouraged to play with their friends and win prizes that will be shared among participating group of friends.

Since the promotion begun about eight groups had won a total amount of GHc260,000 in cash.

Eight of these groups, who accumulated the highest points at the end of each week received GHC10,000, while the rest of the groups had GHC2,500 each.

Speaking at the event, Mr Donald Gwira, Head of Corporate Communication, Airtel Ghana expressed excitement that the promotion was achieving its aim of building friendships and rewarding loyalty of customers.

He said this was Airtel Ghana's way of showing appreciation for every amount spent on the network.

“This is also the opportunity to celebrate great times with friends and win great prizes doing so on the network that cares”, he added.

He encouraged those yet to join and for those were already playing to keep their eyes on the ultimate prize of GHC50,000 cash which would be given out to the group with the highest number of points at the end of the promotion.

We’re Investing Massively In Infrastructure; Not Rearing Fly...
21 minutes ago

Mahama Shakes Tarkwa As Menzgold Customers Give Him Rousing ...
21 minutes ago