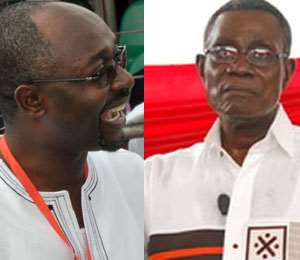 Development-wise, it appears despite their chequered development history, Ghanaian politicians do not get it. A ruling National Democratic Congress (NDC) Member of Parliament, Kojo Adu Asare, thinks a US$40 million corruption scandal that is rocking the NDC won't affect Ghana's 2012 general elections outcome and development.

Adu Asare is shiny but not bright in this situation. Either Adu Asare doesn't get it or have no grasp of Ghana/Africa or do not understand the development project called Ghana. From the creation of the Ghana nation-state some 54 years ago, corruptions have been responsible for the country's instabilities till 19 years ago when genuine democracy brought unpretentious stability.

Corruption affects Ghana's progress. Money meant for roads, food, security, health, housing, education, and other socio-economic infrastructure are stolen. Ghanaians' life expectancy, at 64.2 years, isn't encouraging. Poverty is still a killer. Ghana says it is poor and goes abroad begging for money to survive, to support its budget, yet Alfred Woyome, an NDC financier, in collusion with other high ranking Ghanaians, gleefully swindles Ghana US$40 million.

Adu Asare's NDC, which origin emanated from struggles against corruption, is typical Africa case. Corruption saw confused military coup d'états. With weak or non-existent accountability institutions, the military juntas were themselves engulfed in corruption more severe than the civilians they overthrew. Corruption saw Flight Lieutenant Jerry Rawlings, the so-called founder of Adu Asare's NDC, violently coming to power, with the execution of some military Heads of State and Generals and the painful exiling of some Ghanaians. But it appears the NDC has quickly forgotten its roots and is now embroiled in a US$40 million corruption scandal that has seen some Ministers and bureaucrats disgracefully forced to resign and others arrested.

In all the development issues to be debated in the 2012 general elections, the central issue will be how to get money to build roads, toilets, schools, provide water, food, hospitals, etc. One cannot build these entire socio-economic infrastructures if the state treasury is periodically looted, as Alfred Woyome and his clique, have done. Adu Asare's view that Ghanaians won't vote based on the Alfred Woyome corruption scandal but on President Atta Mills image is disturbing and nonsense. Ghanaians are going to vote in the December 7 general elections based on the Alfred Woyome corruption outrage. For part of the reasons for their continued poverty are people like Alfred Woyome looting their money meant for their development projects.

Partly because of endemic corruption, Ghana ranks 135th out of 187th countries with comparable data measured in 2011 by the United Nations Human Development Index (HDI) that measures human welfare such as availability of water, toilets, education, food, health, etc. The fact that Ghana is at medium human development level at the HDI should be of concern to Adu Asare and how the Alfred Woyome corruption scandal have implications in Ghana's development indicators.

If Adu Asare has feeble sense of the relationship between corruption and development, his fellow brothers and sisters in Botswana could teach him one or two lessons, without looking out to the Western world. With entrenched culture of accountability and genuine independent institutions, such as the judiciary and the legislature, Botswana, according to the Berlin, German-based corruption watchdog Transparency International, is the "least corrupt country in Africa and ranks similarly close to Portugal and South Korea."

In Susan Rose-Ackerman's The Political Economy of Corruption, an independent and honest judiciary, including lower level clerks and bureaucrats, are effective tools for containing corruption. In the Alfred Woyome corruption scandal some elements in the judiciary did actually help Woyome in his crime against Ghana. Former Minister of Education, Betty Mould-Iddrisu, who was forced to resign, refused to prosecute Woyome when the issue was first brought to her attention when she was then the Minister of Justice and Attorney General.

Botswana's anti-corruption apparatuses include activities of its tradition institutions. Botswana, Africa's leading democracy some 45 years ago, doesn't have the experience of the astonishing US$40 million Alfred Woyome corruption scandals and the likes of Betty Mould-Iddrisu. No doubt, Botswana leads Sub-Sahara Africa in development indicators. It ranks high, at 98th on the United Nations Human Development Index. Adu Asare should remember that Ghana ranks medium at 135th.

When Ghanaians "examine their personal lives as to how that has improved under the leadership President John Atta Mills and cast their votes accordingly," as Adu Asare told the Accra-based Peace FM, they will be informed by the raging US$40 million Alfred Woyome corruption indignity that has dented some aspects of their development process. Ghanaians will, therefore, vote according to the issues raised by the Alfred Woyome plundering scandal.