State-owned Media Must Be Fair To All - NMC 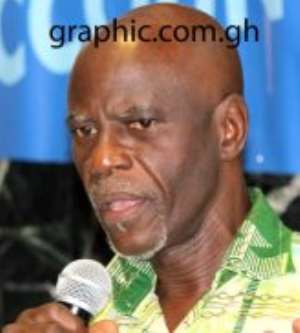 A member of the National Media Commission (NMC), Mr Akoto Ampaw, has called on the state-owned media to stand above sensationalism, misleading headlines and gross fabrications as found in some sections of the media.

“Even as the pressure to compete for audience might be great, our state-owned media have no business copying the crass sensationalism of sections of the private media as the means of capturing audiences. Unfortunately, every now and again the state-owned media tend to stoop to such unedifying levels,” he said, adding that “this must be of great concern to our governing boards”.

Mr Ampaw said this when he presented a paper on “The 1992 Constitution and the Role of the State-Owned Media”, at a workshop organised by the NMC for the Governing Boards, Chief Executives and Editors of the state-owned media in Accra.

The event was the first of the many stakeholders encounters and workshops the NMC would be holding in the run-up to this years election.

In the months ahead, the NMC would be meeting various groups such as political leaders, media owners, the Ghana Journalists Association, the Editors Forum, Ghana Independent Broadcasters Association, PRINPAG, Ghana Community Radio Networks, as well as journalists from both private and state-owned.

The NMC has chosen as its theme: “Ensuring Free, Fair and Peaceful Elections, The Role and Responsibility of the Media”, for its encounters with the various groupings.

Mr Ampaw said the state-owned must be equally critical, analytical and fair and objective about its reportage of all political parties, their policies and activities.

In other words, he said the state-owned media should not be the propaganda mouthpiece of the government of the day or any political party, and that it should rather be the “tribune of the people, promoting their interests and aspirations to quality education, good and accessible medical service, employment, housing, water, food and generally good quality life and all round national development”.

The role of the state-owned media in ensuring free, fair and peaceful elections, he said, required that those media led the Ghanaian media in making policy issues on important facets of social and national life.

“It is said that in some of our state-owned media houses, there is a clear divide along party political lines in the editorial department.

If this is the case, it is simply impermissible. And the NMC expects the boards of the state-owned media to play their role to bring sanity and sanction to bear on such party political abberations in our state-owned media,” he said.

The Chairman of the NMC, Mr Kabral Blay-Amihere, said the programme was to ensure that the state-owned media approached their assignment this year fully aware and conscious of their obligations under the Constitution.

“In many ways, our obligations are cut for us in clear and concise terms by the very Constitution from which we derive our authority and mandate”.

Every Ghanaian, he said, was expected to stand up for the country to ensure free, fair and peaceful election.

The reviewed guidelines on fair and equitable coverage of political parties by state-owned media presented by Mr Edward Ameyibor, a former Supervising Chief Editor of the Ghana News Agency, Alhaji Haruna Attah, Editor of The Mail newspaper and Mr Elvis Aryeh, a former General Manager, Newspapers of Graphic Communications Group, stated that coverage of political activities by the state-owned media should be honest, accurate and factual.

Among other things, they said opinions should not be confused with facts, while coverage of political activities by the state-owned media should be fair and even-handed.