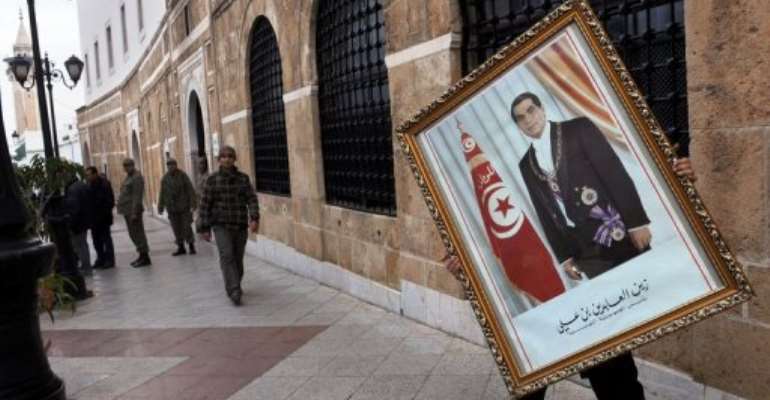 An employee at the prime minister's office removes a portrait of president Ben Ali last January after he fled into exile. By Fethi Belaid (AFP/File)

TUNIS (AFP) - Thousands of Tunisians Saturday turned out in central Tunis to demand jobs and dignity as the north African country marked a year to the day since its despot Zine El Abidine Ben Ali fled into exile.

"Work, freedom and dignity", "Work is a right", and "We will continue the fight", were among the slogans chanted by demonstrators brandishing banners on the avenue which was the epicentre of the popular uprising that gave birth to the Arab Spring.

"We made this revolution against the dictatorship to impose our right to a dignified life and not to help certain opportunists realise their political ambitions," 33-year-old Salem Zitouni told AFP.

Other demonstrators, wearing the red and white of the national flag, called for recognition of the "martyrs" killed during the weeks of unrest before Ben Ali was toppled.

"We are faithful to the blood of the martyrs," and "We will never forget our martyrs," their banners read.

Some also chanted the now famous "Get lost" and "Good riddance" that had accompanied calls for Ben Ali's resignation in the weeks leading up to his ouster on January 14, 2011.

Several people who were wounded in the revolution began a sit-in outside the government headquarters in the old town Kasbah.

Pride of place was given to the memory of Mohamed Bouazizi, the 26-year-old vegetable seller from the central town of Sidi Bouzid, whose desperate act in setting fire to himself was the trigger of the revolt.

Tunisia's revolution, which culminated in a peaceful election in October, has inspired reform movements throughout the Middle East, including the downfall of long-standing autocrats Hosni Mubarak in Egypt and Moamer Kadhafi in Libya.

Leaders from Tunisia's neighbours as well as other Arab countries were expected to take part in anniversary celebrations over the weekend.

Among the most prominent guests that Tunisia's democratically elected leaders will host on Saturday, Algerian President Abdelaziz Bouteflika -- who was a minister in his country's first post-independence government half a century ago -- has so far weathered growing social discontent.

The emir of Qatar, Sheikh Hamad bin Khalifa Al Thani, seen as one of the main sponsors of the Arab Spring, is also expected in the Tunisian capital.

The head of Libya's new National Transitional Council, Mustafa Abdel Jalil, was expected for the celebrations, for which no detailed programme has been issued.

Ben Ali has been convicted of economic and other crimes by Tunisian courts and was granted exile in Saudi Arabia after his plane was denied permission to land in France.

According to the new authorities in Tunisia, Saudi Arabia has twice ignored extradition requests for Ben Ali, who faces an avalanche of trials if he returns.

Among the problems that remain to be solved by the new authorities are soaring unemployment of 19 percent nationally -- up to 50 percent in certain inland areas overlooked for investment in the past -- and widespread social discontent.

Corruption also remains a challenge, with Transparency International downgrading the country from 59th to 73rd place out of 183 countries on its corruption list amid fears that former regime officials have blended into the new political landscape.

Also to mark the anniversary, Tunisia granted an amnesty or conditional release from prison to 9,000 detainees.

The amnesty on what is now a public holiday in Tunisia had been expected and includes Tunisian and foreign prisoners.

Capital punishment of another 122 detainees was converted to life imprisonment.

The death penalty remains on the books in the north African country but is no longer applied.