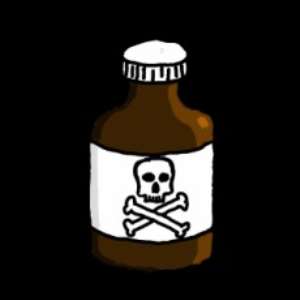 A thirty-eight-year-old mechanic, Charles Amegaezi from Agbozome in the Volta Region, but currently residing at Elubo in the Western Region, on Tuesday committed suicide through poisoning.

The Jomoro District Police Commander, Deputy Superintendent of Police (DSP) John Ferguson Dzineku made this known to the Ghana News Agency in an interview at Half Assini.

He said Amegaezi in June this year, sold his plot of land at Elubo with the intention of using the amount to defray some debt.

The police commander said as the buyer, whose name was not immediately known, was not paying the entire amount promptly, Amegaezi re-sold the plot to another person at 1,800.00 Ghana Cedis.

DSP Dzineku said when the second buyer went to the plot, he discovered that someone was developing it and therefore returned to Amegaezi to demand his money.

The Police Commander said after sometime when the deceased was not paying back the money, the complainant reported the matter to the Elubo Police who arraigned him before the Half Assini district magistrate's court.

DSP Dzineku said the court presided over by Mr Hans Kofi Kpogo after fining Amegaezi 600.00 Ghana Cedis, ordered the complainant to institute civil action against the deceased to claim his money.

The police commander said while the complainant was yet to institute the civil action, Mr Amegaezi was on Dec. 6 this year, found lying unconscious with an empty container of a chemical substance beside him.

He said some neighbours rushed him to the Catholic hospital at Eikwe but was pronounced dead on arrival, adding that the hospital authorities declared that the container that was seen beside him contained poison.

The deceased's body has been deposited at the Axim government hospital mortuary for autopsy.