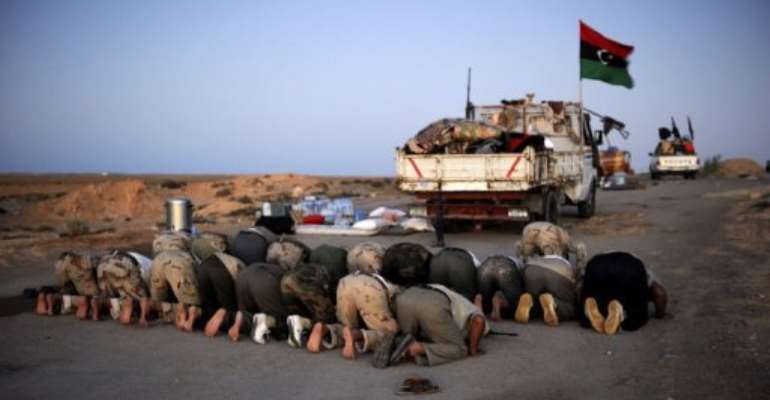 Rebel fighters pray on the last day of the fasting month of Ramadan. By Eric Feferberg (AFP)

TRIPOLI (AFP) - Libya's rebels were on Tuesday seeking the return from Algeria of Moamer Kadhafi's wife and three children, while hunting down the longtime Libyan strongman and closing in on his hometown Sirte.

"We'd like those persons to come back," rebels' spokesman Mahmud Shammam said after Algiers on Monday announced that Kadhafi's wife Safiya, two sons, a daughter and their children, had crossed the border into the country.

So far Algeria has not recognised the NTC and has adopted a stance of strict neutrality on the Libyan conflict, leading some among the rebels to accuse it of supporting the Kadhafi regime.

"The wife of Moamer Kadhafi, Safiya, his daughter Aisha, and sons Hannibal and Mohammed, accompanied by their children, entered Algeria at 8:45 am (0745 GMT) through the Algeria-Libyan border," the Algerian foreign ministry said in a statement carried by the state APS news agency, giving no information on the whereabouts of Kadhafi himself.

"Saving Kadhafi's family is not an act we welcome and understand," he told a press conference in Tripoli late on Monday.

"We can assure our neighbours that we want better relations with them ... but we are determined to arrest and try the Kadhafi family and Kadhafi himself," Shammam went on, saying the rebels guaranteed a "fair trial."

Rebel Libyan justice minister Mohammed al-Allagy told AFP that Kadhafi's youngest son Khamis, whose death has been announced several times since Libya's conflict erupted but never confirmed, may have been killed south of Tripoli and buried on Monday.

Khamis, 28, commanded a brigade seen as the most effective and loyal force of the Libyan leader.

Rebel chief Mustafa Abdel Jalil urged the international coalition to continue its action against the strongman.

"Kadhafi's defiance of the coalition forces still poses a danger, not only for Libya but for the world. That is why we are calling for the coalition to continue its support," Abdel Jalil said at a meeting in Doha of chiefs of staff of countries taking part in military action in Libya.

The international coalition began Operation Unified Protector on March 19 under a UN mandate which authorised air strikes to protect civilians.

Since March 31, the air strikes have been carried out under NATO command.

Coalition military chiefs said in a joint statement that the war in Libya "is yet to end" and that "there is a need to continue the joint action until the Libyan people achieve their goal by eliminating the remnants of Kadhafi."

The White House said it did not know Kadhafi's whereabouts but had no indication he had left Libya.

There had been speculation that he was among tribal supporters in his hometown Sirte, 360 kilometres (225 miles) east of Tripoli, where rebel forces were gradually advancing upon.

Rebels had moved to within 30 kilometres (20 miles) of the town from the west and captured Bin Jawad 100 kilometres (60 miles) to the east, the rebel commander in Misrata, Mohammed al-Fortiya, told AFP on Sunday.

On Monday, the rebels seized the desert hamlet of Nofilia just inland from the coastal road east of Sirte, an AFP correspondent reported.

"Tomorrow, God willing, we will continue our advance. Their morale is rock bottom," the commander said.

The rebels have offered a $1.7 million dollar reward for Kadhafi's capture, dead or alive.

Fierce fighting also raged in the west as rebels trying to mop up resistance by loyalist forces said they were ambushed southwest of Zuwarah.

A rights group said on Tuesday that Kadhafi's forces used civilians as human shields, attacked ambulances and raped girls as young as 14 during the siege of the rebel-held western city of Misrata.

The allegations come from a report released in Washington by the US-based Physicians for Human Rights based on interviews with 54 people in the port city in June, shortly after rebels drove Kadhafi's forces out following months of heavy fighting.

The report cited four witnesses as saying that Kadhafi loyalists detained 107 civilians and forced them to guard munitions from NATO bombing raids, including two children forced to sit on a tank.

It cited one witness as saying that Kadhafi's forces had turned an elementary school into a detention facility where they raped women and girls as young as 14, and said it had documented honor killings of some of the victims.