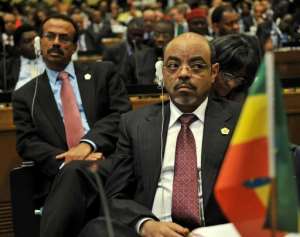 In the verdict handed down on Wednesday, judges said the 14 had the backing of Eritrea for the plan to bomb key targets in Addis Ababa last year, including Ethiopian government buildings as well as the AU's base in the capital.

Four of the defendants received life sentences and six of them were handed 25-year terms. Of the remaining four, one was sentenced to 14 years and three to nine years.

The court said the 14 plotters had been trained in the use of explosives in Eritrea.

Ethiopia regularly accuses Eritrea, which gained independence from Ethiopia in 1991 after a 30-year war, of seeking to destabilise it by backing rebel groups such as the Oromo Liberation Front (OLF) and Ogaden National Liberation Front (ONLF) as well as the Somali Al Qaeda-affiliated Shebab.

In April Prime Minister Meles Zenawi told lawmakers Ethiopia was ready to help the people of Eritrea topple the regime of Issaias Afeworki.

The border war that pitted Eritrea against Ethiopia from 1998 to 2000 left some 80,000 dead. Despite a peace agreement signed in 2000 in Algiers, tension continues to run high between the two Horn of Africa neighbours.

I Was Not Part Of Any Plot To Attack Rawlings – Kwakye Ofosu...
9 minutes ago