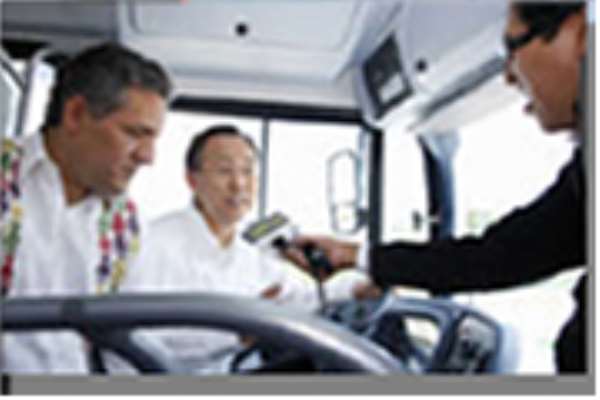 8 December - Committing funds to climate change mitigation and adaptation strategies in developing countries will lead to a safer, healthier and prosperous world for all, Secretary- General Ban Ki-moon told delegates at the United Nations climate change conference in Cancún today, urging them to find ways of raising the required resources.

“Climate financing is one of the most important aspects of our efforts to address the climate change challenge,” Mr. Ban told a side event related to his High-level Advisory Group on Climate Change Financing.

“It is not a panacea for the climate problem, but it is crucial to have adequate financial support for developing countries and for building trust between countries,” he said.

The Group was constituted by the Secretary-General and is co-chaired by Prime Ministers Meles Zenawi of Ethiopia and Jens Stoltenberg of Norway to look into mobilizing financing to help developing nations deal with climate change.

In a report issued last month, it stated that, while challenging, the goal of raising $100 billion annually by 2020 is feasible.

“There is no silver bullet – no 'one size fits all' solution for raising these funds,” Mr. Ban said. “We will need a variety of public and private sector sources. But with political will, leadership, appropriate public policy signals for the markets, and financial ingenuity, it can be done.”

The Secretary-General urged delegates at the conference to “anchor” the findings and recommendations of the Advisory Group in their climate change negotiations.

At the UN climate change conference in Copenhagen, Denmark, last December, developed nations pledged $30 billion of fast-track funding for developing countries through 2012 and committed to jointly raise $100 billion annually by 2020.

Financing is just one of several issues – along with the sharing of technology, reducing deforestation, and adapting to the inevitable effects of climate change – that delegates meeting in Cancún at the 16th Conference of the Parties to the UN Framework Convention on Climate Change (UNFCCC) are discussing.

Also on the agenda of the two-week meeting, which is set to conclude on Friday, is the future of the Kyoto Protocol, an addition to the Convention that contains legally binding measures to reduce greenhouse gas emissions, and whose first commitment period is due to expire in 2012.

Speaking to reporters in Cancún yesterday, Mr. Ban said that there is no “single magic solution” to climate change.

“We need to make progress wherever we can, and keep moving forward in the right direction. I do not expect governments to reach an all-encompassing global agreement here in Cancún,” he stated. “But we need to see progress on all fronts of the negotiations.”