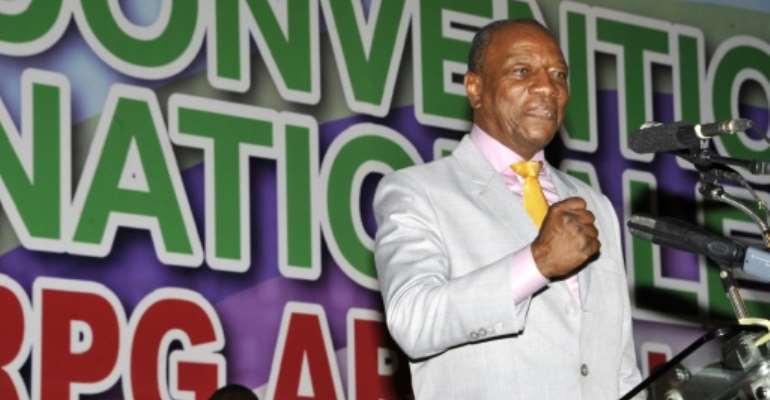 Guinea President Alpha Conde delivers a speech during a national convention of his party, The Rally of the Guinean People (RPG) in Conakry on August 11, 2015. By Cellou Binani (AFP/File)

Conakry (AFP) - Guinea's ruling party and the opposition have sealed a hard-won deal on the organisation of October elections, breaking a deadlock which led to deadly violence earlier this year.

After months of tensions in the west African nation, the parties agreed late Thursday on the make-up of the electoral commission, an audit of the voters roll and to hold talks on a date for local elections, said former prime minister Sidya Toure, head of the opposition Union of Republican Forces (UFR).

"I am very happy that Guinea's political class has finally signed what we can say, without boasting, is a historic deal," said Justice Minister Cheick Sako.

Guinea's presidential election is set for October 11, however local elections -- which were cancelled in 2014 due to the Ebola epidemic -- were initially rescheduled for 2016.

This angered the opposition which is convinced Guinea's local authorities are completely under President Alpha Conde's control and he wants them to stay in power to help rig the presidential vote.

The opposition has held several protests since April over the election calendar which turned violent in clashes with security forces, leaving several dead and dozens injured.

In the accord signed late Thursday in Conakry, the parties agreed to carry out an audit of the voters roll -- which the opposition believes is inflated in areas supporting Conde -- at the same time as the presidential election.

The government also agreed to allow the opposition to choose replacements for two members of the electoral commission who died recently.

Political distrust is high in the mineral-rich but deeply poor country where ethnic tensions along political lines often turn deadly around election time.

Conde became the country's first-ever democratically-elected leader in 2010 in what many hoped would put an end to years of dictatorships, coups and political violence.

However his victory over opposition leader Cellou Dalein Diallo was marred by election violence and claims of fraud, and the same scenario played out during 2013 legislative polls.

Conde and Diallo, both seeking re-election, come from the country's two ethnic majorities, the Mandinke and Fulani.

An unlikely political twist has seen Diallo forge an alliance with former army captain Moussa Dadis Camara who seized power in a 2008 coup after death of longtime dictator Lansane Conte.

Camara's rule is best remembered for a massacre in September 2009 when security forces opened fire on a crowd protesting the junta, leaving 157 killed and horrific scenes of sexual violence.

Camara -- who also stood out for his diatribes on public television in a slot dubbed "The Dadis show" -- was charged in Conakry over the massacre in July.

His colourful and devastating year in power ended when he was shot in the head by a former aide. He survived and moved to Burkina Faso.