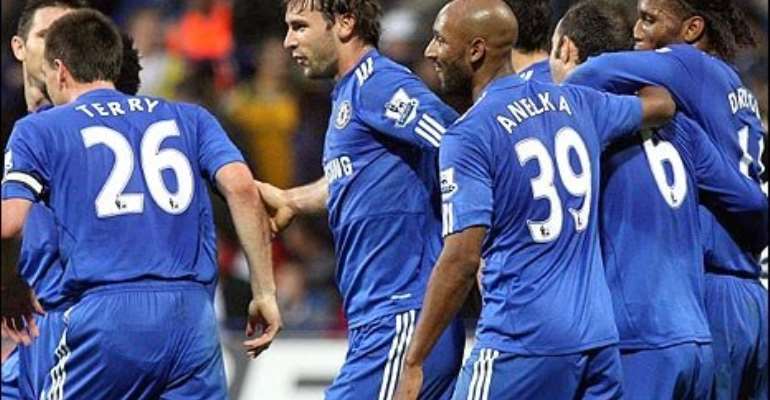 Frank Lampard is disappointed Chelsea missed the chance to go six points clear at the top of the Premier League by failing to beat West Ham on Sunday.

The Blues could have made capital out of title rivals Manchester United's shock 3-0 defeat at Fulham on Saturday but only drew 1-1 at Upton Park.

"We had a great chance to capitalise on other results but we didn't do that," Lampard told BBC Radio 5 live.

"We did not play well enough, particularly in the first half."

West Ham took the lead with a penalty from Alessandro Diamanti on the stroke of half-time after Jack Collison was fouled by Ashley Cole.

But Chelsea drew level on 61 minutes when Matthew Upson was ruled to have fouled Daniel Sturridge in the penalty box, although the defender appeared to win the ball fairly.

Former Hammers star Lampard stepped up to convert from the spot at the third attempt after referee Mike Dean had ordered the kick to be retaken twice for players encroaching into the area.

West Ham manager Gianfranco Zola revealed he was disappointed with the decision.

"The referee got it right in the first place then the linesman put his flag up and the referee changed his mind," he said.

"His first impression was the right one. Pity he did not stay with that. The players were disappointed. The linesman put the flag up and that's why he gave it.

"It's a pity because the referee was better positioned than the linesman. He was closer to the action."

England midfielder Lampard admitted taking the penalty was a challenging situation, especially as he was facing international team-mate Robert Green in the West Ham goal.

"I'd rather do it against a keeper I don't know," confirmed Lampard. "Me and Greeny practise with England so he was aware of my technique. There was a bit of mind games. Fortunately they all went in."

West Ham went into the game on the back of three straight league defeats and in desperate need of a win to boost their chances of avoiding relegation.

But they showed plenty of hunger and desire against a Chelsea side who have failed to produce their best form in recent weeks.

"We wanted to start well and start sharp but we didn't do that," said Lampard. "We gave West Ham a chance to build a head of steam and we made it tough for ourselves.

"We're four points clear, so we have to take the positives, but we do have to get back to playing how we were a few games ago."

Manager Carlo Ancelotti agreed with Lampard that Chelsea only started performing after the interval.

And he blamed the busy festive period for his team's poor first-half display.

He stated: "We started only in the last 45 minutes. Before we played without intensity and were slow. We didn't move the ball quickly in midfield.

"We're not in the best moment but every team has problems in this period.

Chelsea face a trip to high-flying Birmingham on Boxing Day before entertaining another in-form side in Fulham only two days later.

I haven’t said NPP is Majority in Parliament – Bagbin clarif...
41 minutes ago