NDC for 2004 election without prez candidate? 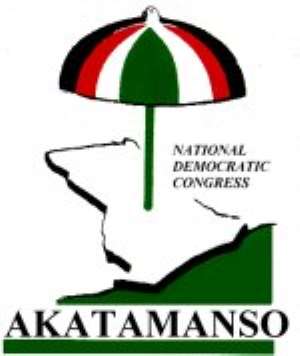 Party insiders who are most distraught by this development say the NDC agreed at its stormy 5th National Delegates' Congress last April that members of the party who wish to vie for the top job should file their nomination papers six clear months to the party's primaries.

The NDC is constitutionally mandated to hold its primaries in November this year.

Accordin to the “The Independent” a top NDC member said, “If party chiefs are to strictly interpret the six months constitutional requirement stated above, the NDC could go into 2004 elections without a presidential candidate.”

“The Independent can confirm that as at the time of filing this report, no aspirant has filed his or her papers to contest for the position.”

The last NDC congress also endorsed an amendment to the effect that the party selects its presidential candidate 24 months ahead of any presidential and parliamentary elections.

Very impeccable sources within the NDC say the party is to hold its extraordinary congress for he election of a flagbearer by the end of November this year.

It was discovered during investigations that the most visible candidate, Alhaji Mahama Iddrisu, who did not mince words about his intention to seek the mandate of delegates at the November congress had as at the end of June not filed his nomination papers.

Former Vice-President, Professor John Evans Atta Mills who many from within and without the NDC see as the party's alternative to president Kufuor is also yet to make public his next political direction, although the paper says it can confirm that there are manouvres by his foot soldiers to convince him to contest the November primaries.

Proponents of the “Mills for President 2004” believe that Professor Mills has comparative advantage over all those touted in NDC circles as potential contestants because of his past as a former presidential candidate.

Professor Mills is currently a visiting Professor in Canada. He attended the last national delegates' congress of the NDC where party chairman, Dr. Obed Asamoah, pipped Alhaji Iddrisu by two votes to win the chairmanship.

“Information pieced together from various sources suggests that Professor Mills' campaign machinery is largely being lubricated by the same party chiefs who supported his campaign in the last elections.

Another potential candidate is the former First Lady; Nana Konadu Agyeman-Rawlings although her camp has often times stated her lack of interest in the NDC presidential slot

The Independent has in recent times highlighted what many NDC watchers perceive as Nana Konadu's overtures to woo potential women who are likely to go into the party's November primaries as delegates.

The paper says, its “Volta Regional correspondent has spotted her in that region politicking with some members of the 31st December Women's Movement. Rawlings fanatics say with her Rawlings name, Nana Konadu possesses a quality which when marketed properly could take the NDC back into power.”

“If our members can get over the old Rawlings scare when no member of the NDC dared to challenge Rawlings' decisions, such as the infamous Swedru declaration, then the likes of John Mahama, Alban Bagbin, Ekwow Spio-Garbrah, J.H. Owusu-Acheampong might be potential candidates,” a top source disclosed. However, other sources are blaming the executive of the party for the lapses created in the run-up to the NDC congress.