Obama said or brought nothing new to Africans

By The Statesman
Feature Article 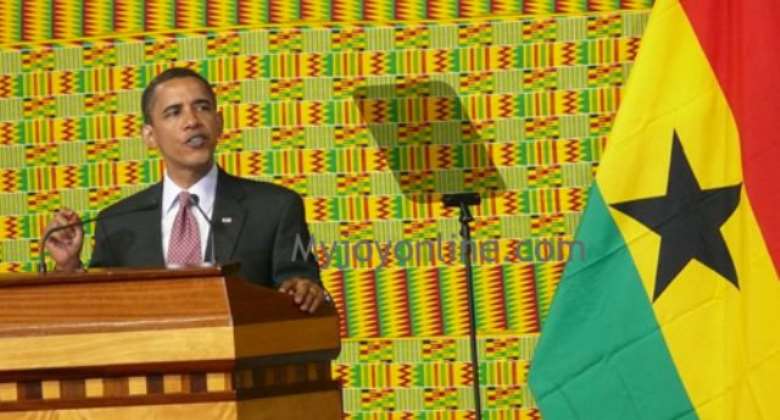 No doubt about it – in the last 5 years at least the euphoria that greeted the visit of the US President Barack Obama was second only to the excitement that gripped Ghanaians when the Black Stars participated in the 2006 World Cup in Germany. Such was the excitement that it instantly turned honourable Ministers of State into paparazzi!

But as the dust finally settles on the departure of the first Black President of the United States, we may want to subject his less than 24 hours spent in Ghana to stricter scrutiny. While many of us might have been impressed by Obama's speech delivery, we may want to assess the substance of what he said and what he came here to do.

Did President Obama say anything new that Ghanaians did not already know? What new thing did the visit bring to Ghanaians as no deal or agreement is known to have been signed? In fact, the US President came here without any notable top officials from his government.

There was no promise of anything new and substantive on the table for Ghana or Africa. The status of the visit, as we see it, succeeded more for its PR substance than offering anything of real substance for our people. Of course, one cannot forget the importance of the private visit to the Cape Coast Slave Fort to the Obamas. We expected to see senior US public officials and top business executives but none of that happened. While President Obama might be applauded for his boldness in doing what other American leaders could not do – criticize African leaders, the signals from his presidency so far are not substantially positive on the value of Africa in his US foreign policy.

It takes a diehard optimist to assume that Ghana and indeed Africa has become a priority partner to the US just because of his Accra speech or that President Obama has African roots. It is hoped that the new American president would not follow the usual democrat way where the Democratic Party has been touted as friends of Africa and yet has always been surpassed by the Republican Party in terms of delivery on what matters to the African in the US-Africa relations.

Many have hailed the speech which linked future US government assistance to African countries to good governance as a new. But, hell no! President George W Bush may not have been as rhetorically bold and loud on his aid conditionalities as his successor is threatening to do, but that was exactly what qualified countries for the Millennium Challenge Account (MCA). Obama said much about corruption, but so did the MCA. Obama said much about ruling justly, so did the MCA. In fact the Bush administration was particularly pleased with, among others, the implementation of the Public Procurement Act in extending the $547 million MCA grant to Ghana.

Even the $3 billion US share of the $20 billion assistance pledged by the G8 group towards improving food security to developing countries spread over the next three years, which Obama made so much noise about in Accra, is woefully inadequate. It certainly pales when compared to how much the same United States spends to subsidize its few farmers. Annual subsidies to US cotton farmers alone is near the $3 billion mark. That is an insult to the African farmers that Obama seeks to assist. Africa's cotton production is concentrated primarily on small farms in the western and central regions of the continent including Mali, Benin and Burkina Faso. Africa's ten million cotton producers earn on average $400 per year, and lose an estimated $250 million annually to heavily-subsidised cotton producers from the world's wealthier nations, in large part because subsidies enable American producers to offer their cotton at much lower prices and still record profits.

The US Farm Bill passed in 2002 provides for $190 billion in assistance to the American agricultural sector over the next decade. During the past twenty years, America has spent a total of $1.7 trillion on various farm subsidisation programmes. According to the Organisation for Economic Cooperation and Development (OECD), America's farm programs transfer about $40 billion a year from consumers, firms, and taxpayers to a small group of farmers.

Obama's speech, at best, covered the vision of the Founding Fathers of Ghana who met in Satlpond on August 4, 1947. Most of what was captured in Barack Obama's Accra speech has for long been espoused in the philosophies of Dr. J.B Danquah, Dr. K. A. Busia, J. A Kufuor, Nana Akufo-Addo, and many other nationalist leaders right from pre independence to post independence days. It might be very interesting to pick a copy of President Obama's speech to the Ghanaian parliament and juxtapose it to Akufo-Addo's speech at his IEA encounter and address at the Ferdinand Anyim Memorial lectures in 2008 on “Why we must believe in Ghana”.

Take a look at what Barack Obama said on the need to build institutions in a democracy;
“In the 21st century, capable, reliable and transparent institutions are the key to success, strong parliaments; honest police forces; independent judges ... an independent press; a vibrant private sector; a civil society. Those are the things that give life to democracy, because that is what matters in people's everyday lives”.

Compare that to what was said by Akufo-Addo during his IEA speech delivery just before 2008 general elections;
“Strong democracies are built by strengthening the institutions of democracy, rather than the power of men, Democracies do best when there are strong and vibrant institutions. As the saying goes, nothing is possible without individuals but nothing is lasting without institutions. The gains we have made in our democracy due to the sacrifices of great individuals must be protected by great institutions. We shall prioritize our budgetary arrangement to ensure that the next NPP government has the funds to strengthen Parliament, CHRAJ, SFO, Food and Drugs Board, Standards Board and other institutions with more resources and where necessary, better personnel and greater efficiency”

Barack Obama again re-echoed the sentiments of J.B Danquah which he said in 1947 at the inauguration of the United Gold Coast Convention. At the event, Dr. Danquah said that the aim of Ghanaian nationalism was to institute a system of government “whereby those who are in control of government are under the control of those who are governed.”

How different is that statement from Obama's statement;
“Each nation gives life to democracy in its own way, and in line with its own traditions. But history offers a clear verdict: Governments that respect the will of their own people that govern by consent and not coercion are more prosperous, they are more stable and more successful than governments that do not”.

The NPP philosophies are deeply rooted and have consistently preached about the need for the rule of law, free enterprise, and the respect for the individual's freedoms and human rights. These were the signposts to good governance that Obama planted in his African policy tracks on July 11.

Former President Kufuor's legacy is rich in the efforts his administration invested in infrastructure, human resource and good governance. These are similar to the fundamentals being preached today by President Obama. Even President Mills promised to deliver on most of these principles long before Obama won the primaries to contest for the White House.

The Danquah-Busiasts have for decades told Ghanaians that the principles of democratic accountability, respect for human rights and the rule of law, must be the guiding principles for our nation's development. But, of course, it sounds better for it to come from an American.

To quote Nana Akufo-Addo; “ Let us embrace the principles of democratic accountability, the rule of law, human rights and individual liberty and freedom, which some of us instinctively believe must form the bedrock of our national development and individual prosperity. Yet alongside this freedom, we must, with the same passion and commitment, uphold our individual responsibility to contribute proactively toward the greater good of society. This is the vision of a free society. No society can be truly free unless its citizens feel the need to embrace both liberty and duty.”

While Barack Obama's short visit gave the country prominence on the international media, it remains to be seen what the leadership made out of the huge publicity. As for substantive or tangible deliverables, a lot more is left to be done. His speech though wonderfully delivered as always failed to deliver anything new or as exciting as the euphoria that greeted his arrival. Ghanaians expected much more from an American President with African roots. African Problems are not going to be solved by PR gimmicks.

Let us all, as patriots of this great land of our birth and choice, brace ourselves to our duties and responsibilities so that our children and their children can say with ease of pride, what many of us have with some courage and incurable optimism held dear to our heart, the slogan “I believe in Ghana.”

From what the African/American US President told and showed us last week, African priorities must be sorted by Africans. Our only advice to President Obama is that he should endeavour against an epitaph: 'Not even him could help his Fatherland show to the world that Africans can more than manage their own affairs.'

The 21st Century is surely for Africans. It is up to Obama to recognise that it is no sheer coincidence that this is also the century which has began boldly with an African and American as the President of the United States.