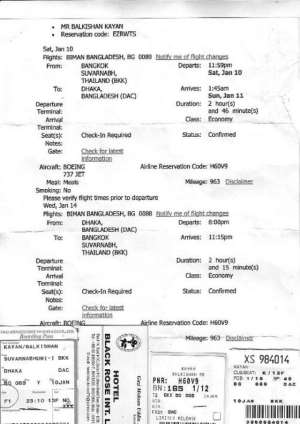 I introduce myself as the chairman of the Group called 'Goldenagro'. We have two companies at Mongla EPZ (Export Processing Zone). Recently, on 25th August 2008, one of the factories suffered big damage due to a fire and I had to travel to Dhaka for a meeting with the MD of our insurance company. Below I will describe first hand of what I had to go through at Dhaka and the kinds of racism by Biman Bangladesh staff which left me very very bitter.

The incident I am referring is the incident which occurred on 14th-15th Jan 2009. I took boarding pass for BG 088 from Dhaka to Bangkok. The flight was shown to be delayed by one hour first. At this time they announced that they will give dinner at the restaurant in the lobby.

When I saw the food they were serving, I did not feel to eat. The rice is double full plate and one tiny bit of chicken in a cup with yellow water (can't really say this as curry). Looking to the standard of the food, I was came out from the restaurant without eating. The restaurant staff asked me why I am going without eating?, I replied I did not like the food, so he gave me one chicken sandwich. After eating I checked the flight status, it showed it is delayed by another hour, and again one hour.

Finally we were asked to proceed for security check at about 11.30 pm.

After security we were send by bus to the aircraft. The pilot then refused to accept the passengers so we again sit in the bus and back to terminal. At 1 am on 15.01.2009 some person came and asked me to go out from security area and sat and waited in the lobby.

At 1.30 am we all passengers were asked to go out side the airport for go to hotel. I did request that I don't want to go out without my luggage. Out side is very very cold and all my warm clothes were in the baggage which was checked in at the time of taking the boarding pass.

Since the Biman staff said I cant remain at airport as a rule so I came out with my passport, no one asked for canceling the stamp or no one kept the passport at the immigration at the time of coming out. (In fact as per stamp in my passport I am out of Bangladesh, but physically I am still inside the country of Bangladesh).

There was no person to guide which bus I have to board, no queue system.

All passengers were jumping to get first in the bus, once a bus is full another comes and again the same chaos. No system for boarding the bus.

Finally I along with few other passengers got a bus at about 1.45 am. We were drop by the bus at a hotel called 'Hotel Black Rose Int. Ltd.'.

After about fifteen minutes the receptionist starts the process to give us rooms. The moment he realized we all were the passengers of Biman, the receptionist asks us to wait and get out of the hotel. He returned after another 15 minute to say that the hotel has no rooms available, so we had to go to some other hotel. He then arranged a bus at 2.30am, and sends us to another hotel. We were all together 12 people in this bus (3 sardars Indian (Bangkok) + 3 aged sikh couples (Singapore) + 2 Bangladeshi men (Bangkok) + myself Indian (Bangkok).

The bus then brought us back to the airport, instead of another hotel.

The passengers who were turban wearing sardar Indians (Bangkok), were sitting near the gate of the bus, after reaching the airport, they refused to get down from the bus. They asked the bus to take them to some hotel. Now, a staff of Biman come and started to pull the Indian man by his hands. This man pushed the Biman man and did not wanted to get down from the bus. Now, another Biman staff came from behind and started shouting 'YOU BLOODY INDIAN', 'YOU BLOODY IDIOTS', 'BLOODY WE WILL KILL YOU'. At this point I thought it to be proper to get down from the bus, so I make my way and get down from bus and go to arrival hall and ask to go to the departure lounge. The security asked me to go to the departure from outside and follow the road which is used by cars.

I finally reach departure hall, there the security would not allow me to go inside the immigration area. They ask me to come back at 7am for to be let inside. In the mean time the same person of Biman comes there and he asks me what my problem is? He informs me that he will send me to some hotel. I refused to go to hotel as by that time it is already 3am and who know which hotel he is talking about again? I told that if I can go inside the lobby after immigration I want to rest inside and really feel to eat some food as I was very hungry by now. The man took me to immigration officer and requested him to allow me to go inside. Finally I was let inside and felt secure. I also brought some sweet curd to eat and tried sleep on the bench. The mosquitoes bit me whole night. The cold was beyond my bearing as I had no warm clothes.

Whole night and till I reached Bangkok, I felt that at any time I may be killed by these unruly Biman Bangladesh Staff. I never came across this type of incidents in my life, where I thought I was so close to death. I still think if those Biman people start a riot and start beating us in the name of 'BLOODY INDIANS' how many people would have joined to beat us? And what would have the consequences?

Due to the incident above, I have taken a decision to close both the factories at EPZ Mongla. This decision will result in loss of money for me, but to live with grace and peace is more important for me.

God bless to the people to have love in their hearts and not hate.

Bal Kishan Kayan
(The author is the chairman of the Goldenagro group and can be contacted at: [email protected] )