Monitoring appointees for reshuffling should not be seasonal, it must be continuous – Kufour 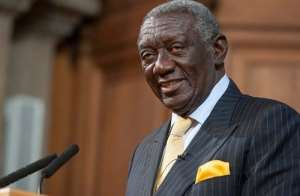 Former President, John Agyekum Kufuor has advised that there should be continuous monitoring of government appointees to know how well they are executing their mandate.

Speaking on the issue of reshuffling when the leadership of the Institute of Economic Affairs (IEA) paid a courtesy call on him, the Ghanaian statesman said the exercise should not be seasonal but continuous.

He argued that a President is just like the coach of a team and must consistently monitor the output of his Ministers to ensure the needed changes in terms of reshuffling are made when needed.

“I didn’t reshuffle just for the frequency of it. No. Any shift I made like I mentioned Mrs. Asmah, she helped me so much when I was canvassing to become President but along the way, I saw that she wasn’t pulling the support I expected from the women like I expected. So that’s how I did the reshuffle. We were watching.

“The president is like a coach. Not just a team leader, he is a coach. You have to know what your Ministers are doing, whether they are being positive or whether you think they are just being average when you should expect more from them. Then you should have the courage to say you don’t believe here, go here, or perhaps sit aside as I did mine. That thing should not be seasonal, it should be continuous,” John Agyekum Kufuor said.

Since the start of the year, there have been several calls for President Akufo-Addo to reshuffle his Ministers to help address the economic hardships in the country.

While calls for the removal of Finance Minister Ken Ofori-Atta have been strong, President Akufo-Addo has maintained that his Ministers have performed excellently.