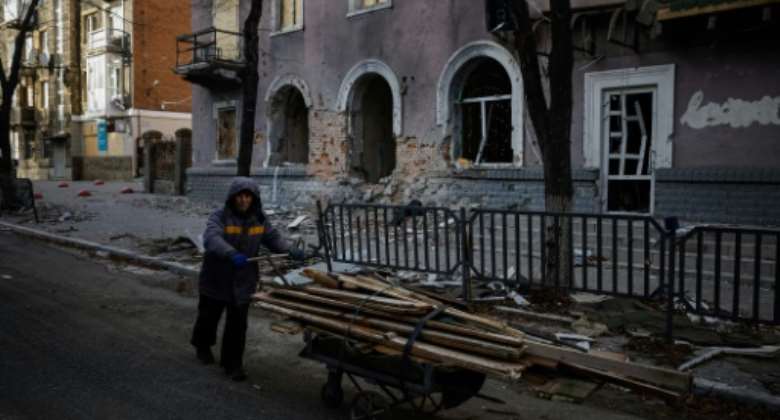 The war has killed thousands of Ukrainian civilians and forced millions to flee. By ANATOLII STEPANOV (AFP)

Russia on Saturday denounced a $60 price cap on its oil agreed by the EU, G7 and Australia, even as Ukraine suggested it was not tough enough and might have to be revisited.

The $60 oil price cap will come into effect on Monday or soon after, alongside an EU embargo on maritime deliveries of Russian crude oil.

The embargo will prevent seaborne shipments of Russian crude to the European Union, which account for two thirds of the bloc's oil imports from Russia, potentially depriving Russia's war chest of billions of euros.

But while Kyiv welcomed the price cap earlier Saturday, Ukraine President Volodymyr Zelensky said in his evening address that the level set was not "serious" as it would not do enough damage to the Russian economy.

"Russia has already caused huge losses to all countries of the world by deliberately destabilizing the energy market," he argued in his nightly address, describing the decision on the price cap as "a weak position".

It is "only a matter of time when stronger tools will have to be used", Zelensky added.

The G7 nations -- Canada, France, Germany, Italy, Japan, the United Kingdom and the United States -- along with Australia have already said they are prepared to adjust the price ceiling if necessary.

The cap stops countries paying more than $60 a barrel for Russian oil deliveries by tanker vessel and is designed to make it harder for Russia to bypass EU sanctions by selling beyond the European Union at market prices.

Limit funds for the 'war machine'

Zelensky, in his speech, appeared to be backing the position that Poland had tried to hold out for before agreeing to the $60 ceiling late Friday. Warsaw and the Baltic states had argued for a $30 cap.

The market price of a barrel of Russian Urals crude is currently around $65 dollars, just slightly higher than the $60 cap agreed, suggesting the measure may have only a limited impact in the short term.

The G7 said it was delivering on its vow "to prevent Russia from profiting from its war of aggression against Ukraine, to support stability in global energy markets and to minimise negative economic spillovers of Russia's war of aggression".

Russia has threatened to stop deliveries to countries adopting the measure.

Russia has earned 67 billion euros ($71 billion) from the sale of oil to the European Union since the start of the war in February.

Its annual military budget amounts to around 60 billion, said Phuc-Vinh Nguyen, an energy expert at the Institut Jacques-Delors in Paris.

The EU embargo on seaborne deliveries follows a decision by Germany and Poland to stop taking Russian oil via pipeline by the end of 2022.

In all, more than 90 percent of Russian deliveries to the European Union will be hit, according to the bloc.

On the ground, Russian forces carried out strikes in the east of Ukraine on Saturday, hitting a "civilian infrastructure facility" in the eastern city of Kramatorsk, the Ukrainian army said.

After suffering humiliating defeats during what has become the largest armed conflict in Europe since World War II, Russia began targeting Ukrainian energy infrastructure in October.

The strikes have caused sweeping blackouts, and cut off water supplies and heating to civilians at a time when the temperature in some regions has dropped to minus five degrees Celsius (41 degrees Fahrenheit).

In eastern Ukraine, where the fighting is still raging, the governor of Lugansk region, Sergei Gaidai, said the conflict was heavy, "because the Russians had time to prepare". Ukraine's forces were nevertheless slowly moving forward, he added.

Ukraine's presidency said the situation was also difficult in Bakhmut, in the neighbouring Donetsk region, which Russian forces have been trying to capture since summer.

On Saturday, the governor of the southern region of Mykolaiv, Vitaly Kim, urged citizens to "endure" the electricity shortages.

Putin on Friday told Germany's Chancellor Olaf Scholz the Russian strikes, which have destroyed close to half of the Ukrainian energy system, were an "inevitable response to Kyiv's provocative attacks on Russia's civilian infrastructure".

He was referring in particular to the October attack on a bridge linking Moscow-annexed Crimea to the Russian mainland.

Putin accused the West of carrying out "destructive" policies in Ukraine, the Kremlin said, stressing that Western political and financial aid meant Kyiv "completely rejects the idea of any negotiations".

Ukrainian President Volodymyr Zelensky has ruled out talks with Russia while Putin is in power after the Kremlin claimed to have annexed several Ukrainian regions.

The Kremlin also said Saturday that Putin would "in due time" visit the Donbas region of eastern Ukraine, which he claims to have annexed. But Peskov gave no indication of when this could happen.