Galamsey-Linked ‘terrorism’ Is Already In Ghana; Only We Don’t Know It! 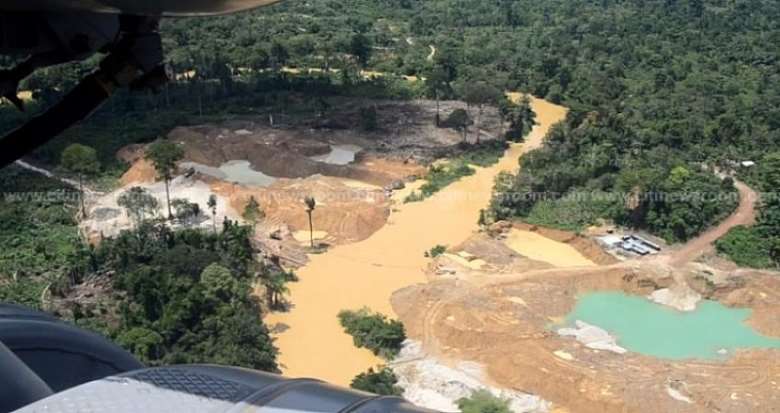 A publication on the internet, dated November 21, 2022, quotes a senior Government Minister as follows:

QUOTE: “The Minister for National Security, Mr Albert Kan Dapaah, has stated that communities engaged in illegal mining (also known as “Galamsey”) are likely to be targets of terrorist groups.

“He made this known while giving an update on the ‘Accra Initiative’, which aims to prevent the spill-over of terrorism from the Sahel [to Ghana] and to address trans-national organized crime and violent extremism [on the border areas of] ECOWAS member countries.

“The Minister explained, in a ... press briefing on Sunday, November 20, 2022, that terrorists indulge in illegal mining to fund their criminal acts, [and that] citizens should [therefore] desist from [that] act (galamsey).

“In Mali, in Burkina Faso, the terrorists have always been attracted to gold mining areas. Clearly, they try to make money from gold mining activities to [enable them] undertake the criminal activities that they engage in, the Minister added.

“The criminals may want to take advantage of galamsey activities in our country to raise money to do what they do in other countries and what they may plan to do in our country.”UNQUOTE

The Minister, however, assured [the country] that his Ministry was “monitoring the situation and working to prevent it from escalating.”

“We are aware of [the situation, he said.] “We are studying it. We do know what has to be done in this area, and we work hard to make sure we are not overtaken by events. But clearly, one way that you can make cheap money to go and undertake some of these criminal activities is galamsey, so it’s of interest.”

Threats from terrorist organizations have been felt in the West African region, especially in Ghana’s immediate neighbours -- Côte d’Ivoire and Burkina Faso. Due to recent terrorist attacks in the two countries, the Government of Ghana has started a “See Something, Say something” programme, whose aim is to get people to report any suspicious activities they encounter in their areas.

It is reassuring to find that the Minister of National Security has linked illegal economic activities to terrorism. In Somalia, for instance, the complete disintegration of the state, through terrorist activity, began innocuously with the “small-scale” illegal smuggling of goods to and from neighbouring Kenya, initially, on donkey-back. This then grew into smuggling by camel caravans. Then developed a completely new phenomenon: the use of motor vehicles, mainly pickups, some of which were converted into powerful, sophisticated armoured vehicles, known as “technicals”. These were so effective that they were even able to shoot down American helicopter warships.

The fact that in Ghana, galamseyers are able to bribe their way into conveying large vehicles like excavators and bulldozers, as well as changfans, across our public roads into the deep bush, to be used in rivers and other water-bodies to mine gold, begs the question, “What if some of these vehicles are converted into armed personnel carriers fitted with machine guns by skilled welders like those at Kumasi 'Magazine'?"

But that apart, some galamseyers are already using terrorist tactics in their operations. For instance, some have been threatening cocoa farmers by issuing them with the ultimatum, “Sell your cocoa farms to us for use as galamsey sites or we shall destroy the farm.”

In some cases, the galamseyers dig holes around cocoa trees, to indicate their intention to uproot the cocoa trees and carry out galamsey on the land. Frightened out of their wits, some farmers accept the galamseyers' offers and sell the cocoa farms for peanuts. Is that not terrorist tactics?

Other activities of the galamseyers which our Government has not yet recognised as “terrorism“ but which impinge seriously on the safety of Ghana’s rural dwellers, especially farmers, is the deliberate diversion of river courses by galamseyers, to gain easy access to riverbeds. This blocks the normal pathways to farms and huts.

And, of course, the muddying of rivers making them incapable of being used for drinking and domestic use; the pollution of rivers with poisonous chemicals like mercury and cyanide; and the protection of galamsey sites with rifles and shotguns, all amount to activities that pose a very serious threat to life and liberty in our rural areas, and by extension, to our national security.

If the ensuing insecurity that galamsey activities provoke were directed at. schools by gunslinging gangs shouting religious slogans, or if some of the activities took the form of murderous attacks on churches and mosques, our Government would immediately classify them as ”terrorist” acts and deploy security forces into the areas, to protect the lives of the populace and their properties, would it not?

It is certainly odd that threats to our national safety are so narrowly defined that it is only now that the Minister for National Security is officially linking galamsey with “terrorist” activities. Indeed, it would not be far-fetched to describe some of the attitudes towards galamsey displayed by members of our Government as tantamount to “massaging” the terrorist threat posed by the galamseyers.

Yet many galamsey activities are ruthless, brazen and utterly corrupt. Describing them as “community mining” activities sends reason to sleep!

Meanwhile, the Ghana Water Company Limited has issued a warning that it may soon close its facilities in some operational regions, “due to the high turbidity levels of the water, as galamsey activities continue to erode water bodies and vegetative cover.”

Speaking on a Citi TV roundtable discussion on Galamsey on November 3, 2022, a high official of GWSC said:

“It is not only our expenditure that is going high, the volume of water that we have to distribute is also getting limited, and so we are having so many problems. We can only manage and keep praying that Ghanaians will one day come to appreciate the extent of damage of the menace.”

The official added “The cost is unbearable. We are resorting to more expensive chemicals to be able to reduce the process loss. The cost of treatment continues to go up....We are not just living for today. There are so many years ahead of us, and we need to be mindful of that.”

He warned that the company would be forced to shut down its systems "in the next 6 months" - REPEAT: NEXT SIX MONTHS - if the situation is not addressed.

“Our system is not made for wastewater, but for fresh water,” he said. “If we do not take the issue of illegal mining seriously enough and address it, our systems may break down, and we may not be able to produce water for Ghanaians any longer.”