Friday set to be the hottest day of heatwave, as wildfires ravage France 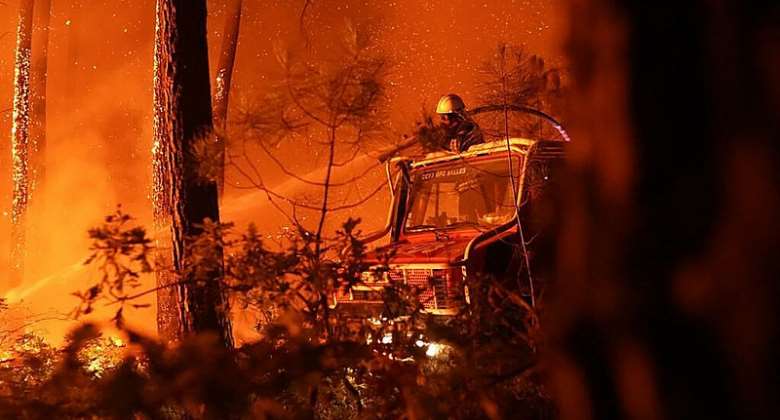 The third heatwave to hit France this summer is set to reach its peak today with temperatures rising to between 38°C and 41°C across the country. This comes as European firefighters have joined in the fight against multiple wildfires that have destroyed hundreds of thousands of hectares of land and displaced thousands of residents.

In the area worst affected by forest fires – near Landiras, in the Gironde, south-western France  – temperatures are expected to hit 37°C on Friday, after peaking at 41°C on Thursday, where 1,100 firemen have been fighting the "monster" blaze day and night, which has been raging out of control for four days.

Nearly 400 European firefighters – from Germany, Poland, Austria and Romania – have joined their French counterpart to assist with the fires, as well as Italian, Greek and Swedish Canadair firefighting planes which took to the skies on Thursday.

.The monster fire - which had already blackened 14,000 hectares in July - has ravaged 7,400 hectares in three days leaving a devastating trail of smoke, falling ash and orange skies.

The blaze has also forced the evacuation of at least 10,000 people.

According to Rémy Lahlay, a professional firefighter who joined the battle from La Rochelle: "It's like being in California, it's gigantic ... but here, we're being overrun from all sides."

The destruction has burned three times the annual average of hectares in France and this year set a high for wildfires in the European Union since records began in 2006.

Even France's eastern Jura region, with its normally more moderate climate, has been hit.

Since Tuesday, two fires have devoured around 660 hectares of forest in the south of the department.

Meanwhile, fires have continued to spread in the southern Isère, Ardèche and Drôme departments.

Météo France has issued orange heat warnings for 19 departments, from the south-west to Finistère in Brittany in the north-west.

But it is expected to become more frequent as climate change takes hold.

The danger posed by heatwaves for the human body is that nights remain hot and exhausting.

Perpignan, near the eastern border with Spain, has already experienced 42 tropical nights (over 20°C) this year, compared to an average of 15 in the 1960s.

What France has witnessed this is approaching "an average mid-century summer" in what is one of most pessimistic global warming scenarios, projected for 2050.

Even in an intermediate scenario, around 2050, the people of Lyon, for example, could experience 35 tropical nights a year, instead of 14.

Meanwhile, the drought that has gripped the country for months has been devastating, with less than a centimetre of rain falling on average in July.

France's Bureau of Geological and Mining Research has warned that water tables are emptying at a worrying level.

It is forbidden to use hoses over a large part of France and some have even forbidden farmers to take water for irrigation, but that is not always respected.

Drought and heatwaves reduce the yields of many agricultural activities: arboriculture, market gardening, cereals - with maize drying up in the fields, and grapes burning on the vines.

And livestock are no exception – a dairy cow, for example, produces 10-20% less milk in hot weather.

However, long-awaited rain is due arrive in the form of thunderstorms on Friday evening over the Alps and the Pyrenees, but only from Saturday evening for the rest of France.