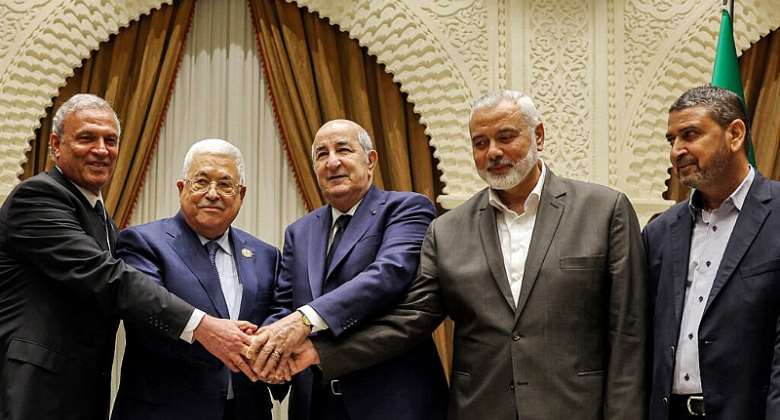 Palestinian President Mahmud Abbas and Hamas leader Ismaïl Haniyeh have met publicly for the first time in over five years, on the sidelines of this week's Algerian independence anniversary celebrations.

The pair, who last met face-to-face in Doha in October 2016, were brought together by Algerian President Abdelmadjid Tebboune, whose country has been celebrating the 60th anniversary of independence from France.

The 2016 meeting in Doha was intended to bring an end to the internal Palestinian political split, dating from 2007, when the Islamist Hamas took over Gaza by force and ousted the Fatah-led Palestinian Authority from the coastal enclave.

Algeria, under Taboune, has pledged to help reunite the major Palestinian parties, but so far, no concrete results have been seen.

In April 2014, both parties met in Gaza itself and signed a reconciliation agreement that led to a short-lived consensus government.

"I cannot count on a meeting on the sideline of celebrations for Algeria's Independence Day.

"The handshake is only a mark of respect to Algeria which invited the two leaders. But I do think that a collective international effort towards reconciliation would help reunite Palestinians.

"Hamas is still considered by international powers like the US and the European Union as a terrorist group. Unless Hamas recognises Israel, accepts existing peace agreements and renounces violence, reconciliation will remain on a far-off horizon."

Abu Se'da suggests that Israel, which continues to fight Hamas, remains a stumbling block on the path to Palestinian reconciliation.

Another Palestinian political analyst, Akram Attallah, agrees. "Israel has always blocked reconciliation in one way or another, and the international community has remained handcuffed."

In 2007, when Hamas took over the Gaza Strip, the western-backed Palestinian President, Mahmoud Abbas, outlawed Hamas and dissolved the Palestinian legislative council, after Hamas had won a majority of seats in the January 2006 elections.

Since then, Abbas and his secular Fatah party have ruled the West Bank, with the Islamist Hamas governing the Gaza Strip.

In 2008 Israel declared Gaza to be a hostile entity and launched its first war against the coastal territory.