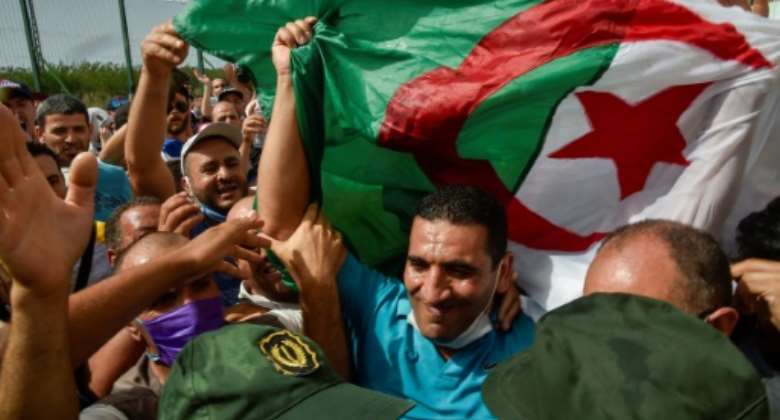 Prominent opposition figure Karim Tabbou is greeted upon his release from Kolea Prison on July 2, 2020, near the city of Tipasa, Algeria. By RYAD KRAMDI (AFP/File)

Tabbou was one of the most-recognisable faces during unprecedented mass rallies, led by the Hirak pro-democracy movement, that began in February 2019. They demanded a sweeping overhaul of the ruling system in place since the North African country's independence from France in 1962.

He was detained Friday evening at his home, rights groups said.

"Until now my brother Karim Tabbou has not been freed," his brother Djaffar wrote on Facebook. "He was arrested arbitrarily and in a terrifying way, without being given the right to contact his family or a lawyer."

Algeria's Human Rights League (LADDH) said on its Facebook page that Tabbou had not been released and there is "no news on the reasons for this new arrest".

Tabbou, 47, had been detained but then released on other occasions, including just before last June's parliamentary election which Hirak boycotted.

His last public activity was on Thursday when he attended the funeral of Hirak militant Hakim Debbazi.

On Tuesday Tabbou published on his Facebook page a "homage" to Debbazi, who died after two months in custody.

"Physically dead, the martyrs of the just causes are more than alive," Tabbou wrote.

He blamed authorities for the death of "modest and humble" Debbazi and said the activist had been "committed body and sole to the Hirak".

Tabbou called on people to honour Debbazi's "sacrifice" and "continue our fight for the advent of a state of law".

In March 2020, he was sentenced to one-year in jail for "undermining national security". The conviction stemmed from his criticism of the army's involvement in politics.

The Hirak protests forced longtime president Abdelaziz Bouteflika to step down. Demonstrations continued in a push for deep reforms but the movement waned when the coronavirus pandemic struck.

Around 300 people are detained in Algeria over links to the Hirak or rights activism, the National Committee for the Release of Detainees (CNLD) says.