Letter From The President: Georgia on my mind 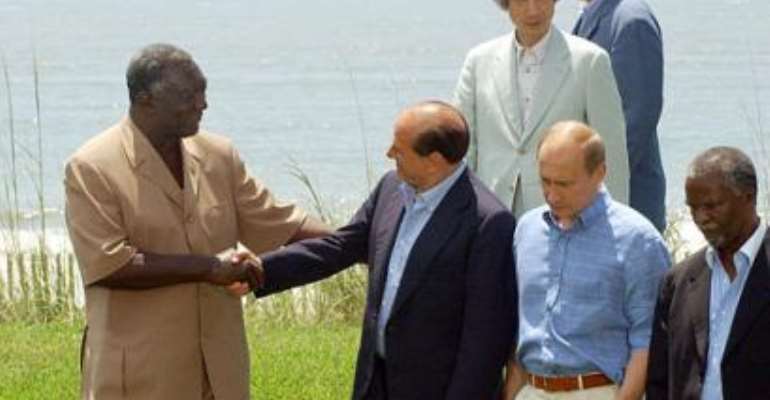 Countrymen and women, loyalists and opponents, I am filled with so much rage and a little bit of sadness as I sit in my hotel room in Georgia to write this letter to you. First, let me talk about why I am sad. I am sad because the world lost a musical icon whiles I was here in Georgia. Ray Charles was a legend, a man who accomplished so much for himself even though the odds were so much stack against him. He triumphed over adversity. It is one of those God-created coincidences that I have decided to use the title of one of his best songs as the heading for this letter. May his soul rest in peace and may he find a friend in our own Onipa Nua (remember him?)

Now let me shift to the other matter which has filled me with so much rage. I came to Georgia with high hopes. I came here with five other Excellent Ones from the African continent. We thought that the richest and most powerful world leaders who make up the G-8 would have the courtesy (if not the mercy) to sit down with us and listen to our pleas for assistance. We were ready to beg. Each of the six of us rehearsed what we were going to say and how we were going to say it so that we would not contradict each other. Alas, we didn't even have the opportunity to beg as much as we wanted to. We didn't feature much in the G-8 summit until the final day. They literally penned us in our hotel rooms in the so-called Sea Island Resort, whiles they talked about what concerned them most. Whiles we were in our hotel rooms we were compelled to drink barrel, upon barrel of tea – as if Lipton is in short supply in Africa. It was not until the final day of the summit that they decided to spare us some sixty minutes, about half of which was spent on a photo opportunity. So what did we get from the G-8 leaders? Nothing. Absolutely nothing, unless, of course, you consider their decision to extend the HIPC initiative for two more years as something to cheer about.

I am now convinced, more than ever before, that these leaders from the rich industrialized world do not care much about us. We wanted to talk about the necessity for them to open up their markets, the removal agricultural subsidies, debt cancellation and technology transfer but they had a totally different list of priorities. They rather preferred to talk about and concern themselves with such banalities as the Iraq quagmire, the Israeli/Palestinian intransigence and weapons of mass deception (or destruction). To add insult to injury, the G-8 leaders told us that Africa will be a major priority at their summit next year in the UK. So I ask the Bushman, why not now? If they wanted so much to talk about the Middle East, why did they ask us to come over instead of inviting Ariel (not the detergent) and Arafat? I won't wait for an answer because I know why they wanted me and the other African leaders in Georgia. The G-8 leaders just needed a sidekick, a spare issue to fall on in case they failed to reach an agreement on the issues that concerned them most.

Am so disappointed and angry. Yet I have learnt some valuable lessons. First, we have to stop looking up to the rich nations of the world for support. They don't care about us. They have their own priorities and they'd rather spend billions on warheads than spend a few hundred millions on food, medicine and technology to help us in Africa. They will dish out a few millions to us only when they want to appear supportive and concerned. Don't get me wrong. They do help but I think the rich nations of the world can do much, much more than what they've been doing for us. As things stand now, they do not appear to be in any mood to do anything more so we have to stop looking up to them for support.

We in Africa, now have to look within us for the things we need and support each other. We can do it. But we need good leaders – the type of leaders who really want to make a difference in the lives of their people. These are the leaders who will not merely lord it over the people and 'chop' the little money left in the kitty or the pittance we get in the form of aids and grants.

Every single country in Africa must take rigorous measures to ensure that businesses thrive. We talk too much in Africa about everything – including investment. Beyond the talk, very little is done to implement policies that encourage entrepreneurs (locals and internationals alike) to invest. We delight in doing the exact opposite of what has to be done. For example, it takes too long to register a company in Sikaman. According to the World Bank, after filling numerous documents in triplicates and quadruplicates, it takes almost 200 hundred days for an entrepreneur to be granted a licence to start a business in Sikaman. If the prospective investor is so 'holy' and fails to pass around some cash-filled envelopes, well, the licence could take a little bit longer in coming. If he gets annoyed, no one cares if he packs his suitcase and machinery and leave the country. In Sweden, it takes just two days for a business licence to be granted and there is no hustle at all. African politicians must also stop hounding wealthy individuals who refuse to donate to political campaigns. Politicians must also stop showing businessmen how to do business. We also need to devote more resources to developing our telecommunication infrastructure, reforming our investment laws and making it easier for SMEs to gain access to credit.

African citizens must also change their attitude towards work. A depressingly large number of Africans think that their governments will bring them prosperity to their doorsteps on a silver platter. So they have a lethargic work ethic. This has to change because the nations (and the continent as a whole) will only prosper if, and only if, individual enterprise is nurtured to produce individual prosperity.

There is a lot to be done and the first step is to stop our dependence on the rich nations of the world. Right now we are like blind men, hitting our heads against the wall and going to the wrong places for support. But like Ray Charles, we have to train and discipline ourselves so that with the little support we get we shall be able to compose beautiful tunes with our lives.

Police scale up security in Accra to hunt for heavily armed ...
17 minutes ago