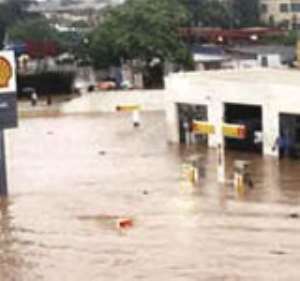 About two years ago, J. A. Fukuor wrote the following letter about the devastation caused by the annual floods in Accra. The message is as relevant today as it was then. We have a bunch of recycled problems in this country...

Countrymen and women, loyalists and opponents, I am outraged (to say the least) and ashamed (to say the least) that once again, I have to write about the subject of the annual flooding of our national capital. Almost every year, for the past four or five years, I've written about the urgent need for a permanent solution for this problem. All my advice and calls to action have apparently fallen on deaf ears and the situation persists.

I'm currently not in the country. As you are very much aware, I am travelling around the world – not just enjoying myself but lobbying seriously for Sikaman to be made a member of the G8. I've been to every one of their summits for the past three or four years and we are tired of just coming in as observers. It wouldn't be out of place for us to be made a member of the group even though we are not as advanced and forward-looking as most G8 countries are.

I was in Brussels, when I heard the news that Accra had been flooded (again!) after more than 24 hours of persistent rainfall. The rains are quite timely, I must say. We need the waters in the Akosombo Dam and I know that most of you have been “praying without ceasing” for God to open up the heavens and fill the dam so that we can have electricity. If we had been wise, we would have known that if God answers our prayers, we might not be able contain the waters. In preparation for the rains therefore, we would have either taken action to forestall any flooding or asked God not to open up the heavens so wide. We did neither and now, so far, I hear about eight people have died as a result of last weekend's floods. What a pity!

Let me use this opportunity to express my heartfelt condolence to the families of those who perished in the floods. I hope that their deaths will not be in vain and that the so-called 'authorities' will have their eyes opened to the fact that we can't lose anymore people to a problem we can very easily resolve.

Preventing floods, my brothers and sisters is not as difficult as producing electricity. If government cannot save its people from the elements by simply taking steps to prevent flooding after it had woefully failed to generate and distribute electricity, then I suppose many of you will be wondering what governments are supposed to be doing.

For years, I have heard many government officials threatening fire and brimstone on those who have built on waterways. Apparently, one of the contributing factors to the city's flooding is the construction of houses on waterways. We've known this fact for a very long time, yet, no action has been taken. Illegal constructions continue to block the free flow of flood waters and people are helpless when it rains. I have heard the Minister for Local Government threatening to take action. Sorry to say that we've heard this before and as Dasebre Dwamenah said recently, “once bite, twice shy.”

In essence, I am not very optimistic. But, as usual, I will be very happy if I am proved wrong. I will be more delighted if the minister goes ahead to take “action”, as he's promised, against illegal land developers and the city planners who issue permits for houses to be built on water ways. However, even before the minister puts his act together, I have read on the internet that the promised “action” against illegal developments on waterways will be “difficult”, according to a deputy Interior Minister. In other words, nothing can be done and as long as it rains, the city will be flooded and come next year, we will be having this same discussion about floods and how to prevent them – again!

Seriously, I am issuing this warning to whoever is responsible for preventing floods in Accra that inaction is not an option. Something has to be done (and immediately!) to prevent any further loss of lives. If it's too late for us to save lives this year, I want us to be absolutely sure that next year we will be ready for the rains and they won't cause any havoc.

The first thing to do is for the 'authorities' to use their authority to demolish all the buildings in waterways. Of course it will be a difficult thing to do. But that's why we are the 'authorities'. We were elected to take tough decisions. Some of these decisions will not necessarily win us votes but we need to do what we ought to do. If our decisions/actions are unpopular but do not cause people to 'swim' to their deaths in muddy waters, then that's the way to go. Any government that is afraid of tough decisions is not worth the name. So, please, someone should take this issue by the balls and deal with it once and for all.

The second and the most important thing, I think, is for government to take the issue of drainage very seriously. If the gutters were not so small and were not so choked with garbage, we wouldn't have this problem. Forget about those houses in the waterways for a moment. Accra's gutters are absolutely useless when it rains. Just take a ride around the city on a rainy day and you'd see how the waters wash out plastic bottles and all sorts of garbage from the drainage system.

I suppose that as a people, we've decided that we cannot (and will not) stop littering. That's not wise but in a situation like this, I believe that it is government's responsibility to protect the people from bringing death and destruction onto themselves. That is why I think that instead of squandering money on needless ventures like building presidential mansions and so-called jubilee parks and erecting useless marble statues, we should think seriously about constructing bigger drains in the national capital.

Furthermore, it is imperative that we embark on a very serious exercise to cover all (not a few, not some – but all) the gutters in the country. You see, when the gutters are covered, people cannot turn them into trash bins and so they won't be choked. And when the rains come, the waters will flow freely and there will be no floods. This is common sense that the 'authorities' should be aware of. You don't need your busy president to tell you this and please, no one should make the mistake of thinking that I will follow in Jerry Boom's trail and jump into a gutter to help get rid of garbage. I respect my office very much and I won't do anything beneath me.

In the meantime, countrymen and women, I believe that the floods should teach us all a lesson: we need to stop littering. Is this too much to ask, if we want to save lives? Remember, the banana peel you throw into a gutter might cause a flood, which could take your life or that of a person close to you. Think about that and keep safe.

Before, I sign off let me advice those staying in the so-called low-lying areas to consider taking swimming lessons. Until we put our act together, your backstrokes and your breastrokes might be your only hope for survival.

Excellently yours,
J. A. Fukuor