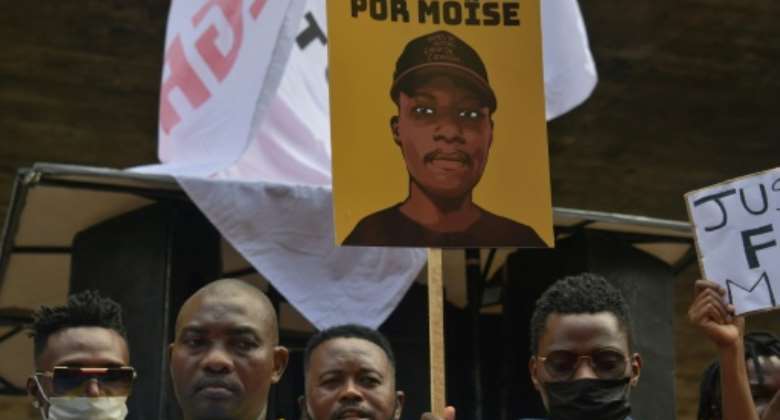 People calling for justice during a February protest against the murder of 24-year-old Congolese refugee Moise Kabagambe in Sao Paulo, Brazil. By NELSON ALMEIDA (AFP)

The brutal murder of a Congolese man at a Rio de Janeiro beach has cast a harsh spotlight on the ordeals African migrants face in Brazil, the country with the biggest black population outside Africa.

Moise Kabagambe, a 24-year-old migrant who fled to Brazil with his family in 2011 to escape violence in the Democratic Republic of Congo, was beaten to death with clubs and a baseball bat at the beach-front bar where he worked in Rio's upscale Barra da Tijuca neighborhood.

His family says a group of assailants attacked him after he demanded payment of two days' overdue wages.

The January 24 killing has unleashed a flood of outrage, grief and soul-searching in Brazil, where many African migrants say they face poverty, violence and double discrimination as both foreigners and blacks.

"I'm thinking of leaving Brazil after what happened with Moise. I'm afraid for my children," said Sagrace Lembe Menga, who also fled the conflict-torn Democratic Republic of Congo, arriving in 2015.

Signs lying on the pavement during a protest following the killing of 24-year-old Congolese refugee Moise Kabagambe in Brazil. By NELSON ALMEIDA (AFP/File)

The 33-year-old refugee and mother of two says she has regularly faced racism in her adoptive country, especially at the salon where she works as a hair stylist.

"I've had people ask me if I live with giraffes."

Brazil has 1,050 refugees from the Democratic Republic of Congo, and around 35,000 African immigrants in all -- though experts say the official figure is likely an underestimate.

They often live in poor slums dominated by drug gangs, and are paid far less than other immigrants in Brazil -- an average of 2,698 reais ($510) a month, compared with 4,878 reais a month for all immigrants combined.

"If I had to tell the story of every incident of racism I've faced, I could write a book," said Elisee Mpembele, 23, a Congolese singer who arrived in Brazil in 2013.

"Wary looks, stares, security guards following me around the supermarket. The other day, I asked some police officers for directions, and they ended up searching me."

He said finding work as a musician was tough, so he often had to resort to odd jobs to make ends meet.

Racism and discrimination are nothing new in Brazil, home to the second-biggest black population in the world, after Nigeria.

The country was the last in the Americas to abolish slavery, in 1888, and blacks still face deep-rooted poverty, exclusion and systemic racism.

As foreigners, African migrants are even worse off.

The racism they face in Brazil "is all the more perverse given that 55 percent of Brazilians are black," said Bas'llele Malomalo, an expert on African-Brazilian migration at Unilab university.

"The integration problems faced by African migrants have the same roots as those encountered by former slaves, who were still seen as objects, as animals, at abolition," he said.

'Keep my head down'

All too often, racism also translates into violence.

Seventy-seven percent of homicide victims in Brazil in 2019 were black.

The danger for black foreigners is even greater, said Malomalo.

"In the minds of the racists, since it's a foreigner, no one's going to defend him," he said.

A woman holds a bag with mock blood that reads "Black Blood, not one more drop" during an anti-racism protest after Moise Kabagambe's killing. By EVARISTO SA (AFP/File)

"Whenever someone hassles me, I just keep my head down to avoid any problems," said Modou Fall, a 34-year-old Senegalese migrant who sells sunglasses on Rio's famed Copacabana beach.

"It's hard working here. I struggle to send money to my family."

Many Africans arrive in Brazil full of "entrepreneurial spirit," said Rui Mucaje, head of the Afro-Brazilian Chamber of Commerce (AfroChamber.)

But most end up doing menial jobs in the informal sector, he said.

"It's not uncommon to see people with university degrees end up working jobs they're way overqualified for," he said.

As examples, he cited an engineer who is working at a supermarket and a surveyor working as a hotel cleaner.

Kabagambe's killing, he said, is "the tragic result of the problems created by racism in Brazil."