Okyeame Baffour Akoto is the Pillar of the UP Tradition: Let Us Stop the Distortion of History 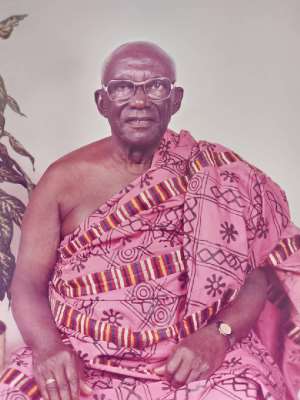 We have come across two different narratives on the history of the UP tradition and we deem it necessary for the clarification of the many distortions they each contain. One is by the Deputy Majority Chief Whip, Hon. Habib Iddrisu and another by an anonymous writer titled “Complete Distortion of History”.

It is worthy to note that, the United Gold Coast Convention (UGCC) and the Ghana Congress Party (GCP) had both not fared well in their respective general elections; 1951 and 1954. It therefore led to the disband of the two parties respectively and consequentially, because, they respectively could not provide a solid and hopeful opposition to the Kwame Nkrumah led CPP government.

The founder and leader of NLM was Okyeame Baffuor Akoto. It was formed on 19th September, 1954, when over 40,000 people led by Okyeame Baffuor Akoto gathered at the source of the sacred Subin River in Kumase, the capital of the historic Asante empire for the inauguration of the party through a rally, pouring of libation and a slaughtering of a sheep. It is instructive to note that, during the planning and formation of NLM, neither Busia, Danquah nor the elite class had a hand in it. They all requested to join after the inauguration and other events of the party turned out to be highly successful; the rally was given a huge publication by The Pioneer due to its success.

Eight months after the inauguration of NLM, on May 30, 1955, John Baidoo, the CPP member of the Legislative Assembly for Atwima-Nwabiagya Constituency, was killed in a car accident. The event therefore presented itself as an opportunity for the NLM to assess its political influence on the national terrain through a by-election. The NLM presented B. F. Kusi and the CPP presented B.K Kuffuor. Due to the fierce nature of the contest, the entire CPP bigwigs including Kwame Nkrumah, Kofi Botsio, among others, moved to Nkawie to campaign. The CPP, as well, employed all the political machinations to foster for a victory, yet, on 15 July, 1955, B.F. Kusi won a resounding victory over the CPP's B. K. Kufuor; polling 3,998 votes to Kufuor's 1,758. This victory therefore presented and positioned NLM as the most formidable opposition and best possibility for a successful challenge to Nkrumah's government within the existing constitutional framework.

In a public message to Nkrumah after the by-election victory, Baffuor Akoto summarized the Executive's new-found faith in its electoral abilities: "My supporters and I have won our first victory, the forerunners of many more and crushing victories. We have defeated you and your supporters and will continue to defeat you whenever…” This singular speech which was widely published underscores who was the founder and leader of the NLM.

The Avoidance of Discrimination Bill was presented to the Assembly on December 9, 1957. In anticipation of the passage of the Bill, the opposition parties under the chairmanship of Okyeame Baffuor Akoto agreed to fuse into a single party called the United Party (U. P). On 3rd November, 1957, the United Party was inaugurated in Bukuom Square. In fact, members of the Northern People Party, which was the second most formidable political party after NLM per popular vote, among the other smaller political parties, agreed to join the coalition because of the financial, traditional, political and social influence of Okyeame Baffuor Akoto. Note: Days before the inauguration of the NLM, the leader of the Muslim Association Party (MAP), Bankole Awooner-Renner spoke to a large crowd in Kumase, declaring that NLM had the full support of his party: “The Kotokos had now arisen to join Islam to fight the common foe. We want to assure the Kotokos that whether it rains or snows, shines or otherwise, we shall stand firmly by your side”.

Due to CPP’s frantic efforts to consolidate power, by the time the Republic of Ghana was inaugurated on 1st July, 1960, only four Northerners from the Northern People’s Party; S. D. Dombo from Jirapa-Lambussie, Abayifaa Karbo from Lawra-Nandom, Jato Kaleo from Wala South and B. K. Adama from Wala North, resisted Nkrumah’s pressure and remained in UP and on the non-government benches in the National Assembly. All the four hailed from the North-West (Upper West Region). The rest all crossed carpet to join the CPP.

Baffuor Akoto’s NLM continued to remain the nucleus and anchor of the UP, and held its fortress until the Tradition under Progress Party (PP) won power in 1969.

In furtherance, while Okyeame Baffuor Akoto, S.D Dombo and JB Danquah suffered jail terms for their resistance of Kwame Nkrumah’s oppression, Busia went into exile while the likes of Alhaji Mumuni Bawumia, J.A Braimah, among other party giants crossed over and enjoyed heartily under Nkrumah’s government.

The above facts therefore find it erroneous when any talks about the UP tradition and totally downplays the significance of the key personality, Okyeame Baffuor Akoto at the centre of the formation, sustenance and existence of the tradition.

Latest Photo Reports
Catch up with all the political quotes from our politicians.
Advertise here
More Article
ModernGhana Links
Nigeria needs more social science research: how to boost output
Rule of law in South Africa protects even those who scorn it
Why The Gambia should fast-track gender quotas for women
Curious Kids: What would happen if all the mosquitoes in the world disappeared?
Book review: how Africa was central to the making of the modern world
Tracing the path of the word of faith or prosperity preachers in Ghana and West Africa
The Determinants of Rural Poverty in Somalia
Informal waste collection shouldn't let plastic polluters off the hook: here's why
COVID lessons: scientists without quality data are like unarmed soldiers in a war zone
TOP STORIES

Government meeting with Minority over e-levy ends inconclusi...
57 minutes ago