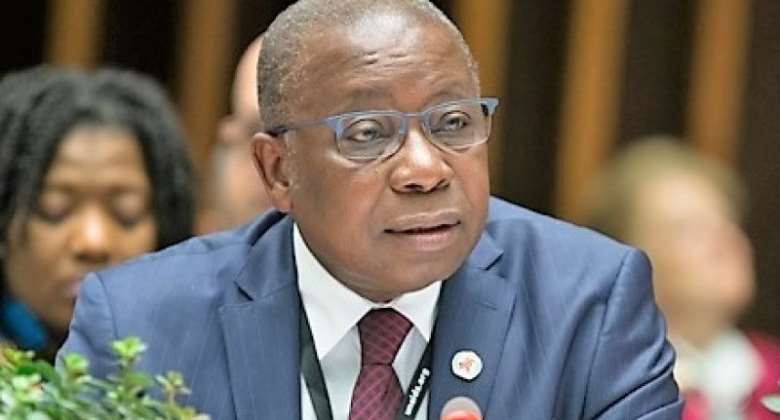 The Health Minister, Kwaku Agyeman-Manu, has expressed his utmost disappointment over how he was treated in relation to the botched procurement of the Sputnik V vaccines from a middleman.

According to him, his personality was shredded into tatters over the deal.

Mr. Agyeman-Manu made this known on the floor of Parliament on Wednesday, November 24, 2021, during the debate on the 2022 Budget Statement and Economic Policy.

He insisted that he was lambasted for trying to get vaccines quickly to help vaccinate Ghanaians against the COVID-19 disease.

“Mr. Speaker, I am so amazed. When I was rushing to get some vaccines to do vaccinations quickly to meet our development targets, I was found culpable of not coming to Parliament and I was lambasted to the extent that now I don't have any image in this country,” he said.

The controversy began when a Norwegian newspaper, VG, reported that the government of Ghana was using the services of middlemen to procure 3.4 million doses of Russia's Sputnik-V vaccines.

The Minister had earlier claimed that the state had not made any payments for the vaccine.

The Health Committee in Parliament had also said the government was not being ripped off in the deal with its chairman, Dr. Nana Ayew Afriyie saying that the Russian Direct Investment Fund (RDIF) and the procurement of the Sputnik V vaccines require the use of middlemen whose activities will lead to an increase in the original price.

Dr. Afriyie also said no consignment has been received.

But a parliamentary committee set up to probe the deal indicated that the $2,850,000 representing 50 percent of the $5,700,000 owed to Sheikh Maktoum for the supply of 300,000 doses of Sputnik V vaccine was actually paid to him, although only 20,000 doses were delivered.

The contract, according to Ghana's Health Minister, was abrogated by Sheikh Ahmed after failure to meet his obligation and the money refunded to Ghana.

Findings of the committee

The parliamentary committee set up to probe the deal released damning findings, including the fact that the Health Ministry did not receive Cabinet approval for the deal.

The health Ministry also breached the constitution by not seeking parliamentary approval for the agreement.

In addition, the Public Procurement Authority did not seek approval from its Board before signing the Agreements.

The Minister for Finance was tasked to take steps to recover the money already paid to Sheikh Al Maktoum.

The committee, however, did not outline explicit sanctions for the Health Minister.

These findings were contained in a 29-page report.

In the aftermath of the revelations, there were calls for Mr. Agyeman-Manu to resign as Health Minister.

The consensus from Civil Society Organisations and observers were that the Minister had no excuse and justification for the procurement infractions.

The main opposition party, the National Democratic Congress, was also adamant that the Minister resigns. They even wanted the Finance Minister to shoulder some of the blame.

The hashtag #AgyemanManuMustGo trended on social media, with Ghanaians demanding the Minister leaves his portfolio because of his role in the deal.

They rubbished the Minister's defence when he appeared before the parliamentary committee probing the deal on July 19, where he notably said he was desperate and confused when he oversaw the deal for the vaccines.

This came as Ghana contended with its inability to secure vaccines to meet its target to vaccinate 20 million people. Support for the Minister

Mr. Agyeman-Manu received some backing from members of the government and legislators.

The Minister of Finance, Ken Ofori-Atta, for example, said Ghanaians were being unsympathetic.

He said this because he felt, Mr. Agyeman-Manu, was doing his best to secure vaccines for the country.

The Deputy Majority Leader and the Chairman of the committee that probed the botched deal, Alexander Afenyo-Markin, further said it would not be necessary to take punitive action against the Health Minister.

Though the Attorney General is on record to have advised against the deal, Mr. Afenyo-Markin felt the urgency of the situation did not permit the Minister to use the right channels.

In President Akufo-Addo's only public comments on the Health Minister in the wake of the controversy, he laughed, saying Mr. Agyeman-Manu had endured a lot at his ministry.