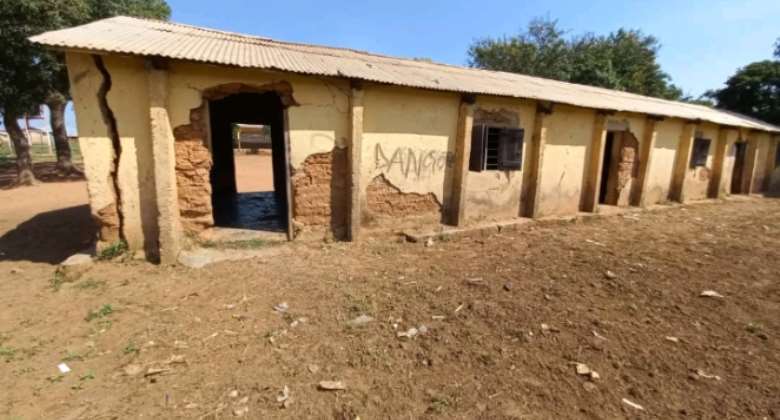 Teaching and learning at the Nabori Primary School in the West Gonja Municipality of the Savannah Region are seriously been affected as academic activities are conducted in an old dilapidated school structure with visible cracks posing as a death trap to the lives of teachers and pupils.

The Assemblyman for the area, Mr. Iddrisu Abdul Rahman who spoke to Modernghana News expressed worry over the risk posed to the lives of the pupils who are compelled to study under the dilapidated death trap school block.

According to him, all efforts to have the school block replaced or fixed by duty bearers and the authorities have all proved futile.

He expressed concern over the safety of the school children saying that he fears the dire consequences if nothing is done about the situation.

According to him, whenever it rains, authorities of the school are forced to close the school or move the pupils from the building over fears it might collapse.

He therefore appealed to NGO's, institutions, and philanthropists to come to the aid of the school.

The school authorities when approached refused to speak because of the fear of being victimized but however admitted the current situation of the school negatively affects teaching and learning.

The school currently has a population of 206.

We say no to Bagbin's political charlatanism, partisan chica...
33 minutes ago

IGP cause arrest of police officer for allegedly harassing f...
49 minutes ago