An American in an Accra Taxi 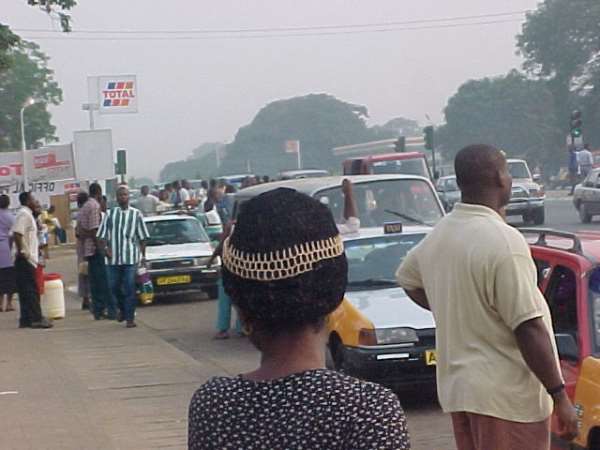 Jesse Fruhwirth for Accra Mail
My taxi was stopped in traffic. It was mid-day, sunny, hot, seemingly no breeze anywhere in Accra. My driver and I had been chatting pleasantly. He said he wanted to move to the U.S. to make money. I cautioned him against his beliefs, and the beliefs held by many Ghanaians that America is "a few steps from heaven" or that in the U.S. "everyone can make it on his last dollar". My driver listened to my description of U.S. economic inequalities but seemed incredulous toward most of what I said about America's poor classes. As we chatted, a man approached the window, weakly limping toward the stopped car with the aid of a slightly broken crutch. He was very old and sweat poured from his forehead. His right hand was deformed, like a shrivelled claw, and with a hand motion he was silently and humbly asking for money. My driver looked over at the begging man and me, and in a tone of disgust and sadness asked, "Now, would this scene ever happen in your country?" I said that yes, certainly, in every large city in the U.S. you will find poor, hungry, dependent individuals who have no recourse. Every city. The U.S. is admittedly a land of vast opportunities. Its economic power is unequalled in the world, good education is available for most, and health care is quite thorough for a large portion of Americans. To the surprise of many Ghanaians, this is only a part of the American reality. Economic prosperity in the U.S. is becoming available to fewer individuals each year. Americans call this problem the "disappearing middle class". Rich are getting richer, poor are getting poorer, is sung like a call and response song. I have difficulty convincing some Ghanaians a violent crime rate infests America's urban centres, millions of Americans live poor and hungry lives, and a legacy of racism still haunts American society. These are only a few of many major issues facing U.S. society of which too many Ghanaians seem unaware. This misunderstanding has as much to do with Americans' ignorance, as it does Ghanaians'. Large portions of Americans who come to Ghana, many who are tourists, have very little education on the socio-economics of Ghana or Africa. American students at primary and secondary levels often are not taught with any sophistication the issues of Africa. Even receiving a degree from a very prestigious university does not ensure that a student will know much of anything about Africa. But obviously with little education regarding Africa or its peoples, the American tourists have plenty of money available for leisure activity in African resorts and villages. This is the image then - that of the rich American who spends millions on arts, crafts, hotel rooms, and restaurant meals - that many Ghanaians are accustomed to seeing and befriending. It does not relieve the misperception problem that American movies and music seem to confirm the idea that all Americans belong to a rich, leisurely class. Not all Americans live the lives of the Americans you see in Ghana. There are poor Americans. There are many murderers. There are many psychological diseases and addictions afflicting millions of Americans. Racism affects people of African descent in every community small or large in the U.S., and because of this, African expatriates may not always feel welcome. I hope for a more complete understanding of the U.S. The contradiction between extreme wealth and poverty in the U.S. is a disappointing reality, but it is something American's are working to alleviate, and this is the source of pride. I'm not proud that America is an ideal society, as so many people perceive it, because it is not. I'm proud that, like many other countries, we are trying to make our people stronger.

Policy saturation, failure fatigue and frustration can make ...
4 minutes ago