Kindness And The Ghost Of Kutu Acheampong. 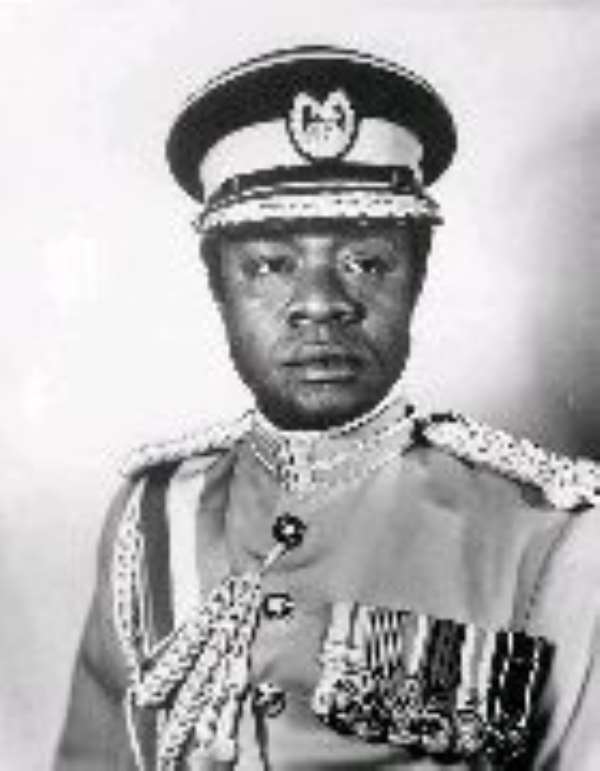 "My kindness brought me to this!" These were the famed last words of Kutu Acheampong, Head of State of Ghana, General of the Army and Supreme commander of the Ghana Armed Forces, first among equals and alumnus of Swedru Business School. It is rumored that, he uttered those words, that fateful day at Teshie Shooting Range, just before the executioner tied the blind fold around his eyes and asked if he had anything to say. I was not there myself that day, but the rumor says that, right after these words, and after the blind fold was secure, the executioner made a last round of Kutu and the other doomed men to check if the blind folds were secure. As soon as he touched Kutu`s eyes, the General let out a blood curling scream and defecated himself. He had thought the executioner`s cold fingers were the cold hard nose of the bullets that would soon extinguish his life. "My kindness brought me to this!" And indeed Kutu had been known for his legendary kindness. The Cocoa Marketing Board had become his personal bank, from whence 'kindness' was lavished on those whom the magic wand of the Man from Trabuom would kiss. Remember the one about Kutu's old drinking buddy from the Trabuom days, who decided to visit Kutu in the castle which had been used to sell our people like cattle, and then used as the seat of power to colonize us, and now inhabited by our Liberators and Redeemers. Kutu is said to have gone into a large locked room, returned with bundles of cold hard un-devalued cedis, handed it to his drunken buddy and told him to depart and come to his castle no more. The man, the rumor continues, removed his cloth, tied up all the money into the cloth, and with only his 'jokoto' on, he walked out of the castle, past the security detail, down Chri! stiansborg road, singing the praises and of course kindness of 'Alhaji Blanket`. And for those who are too young to remember those times, Kutu's greatest singular act of `kindness` was the broad path he created from his bedroom to Kowus Motors for young girls who were eager to acquire Volkswagen Golf cars with no money. The babies born out of this highway will make a good sociological study for any ambitious social scientist.

Yet this kindness from the men of authority in Ghana was not limited to Kutu alone. Ever since the first republic of Kwame Nkrumah, Osagyefo, Doctor, Fount of Honor, and goldsmith's son, kindness has emanated from the State. Krobo Edusei's famed golden bed is one of the greatest acts of kindness that the State has bestowed on its own Minister without 'Portfolio, or Portlofio, as Kutu was wont to say. Of course, with Krobo, it is hard to determine whether it was the bed frame or the mattress which was golden. But knowing him, it was probably both. A golden bed stead with a solid gold mattress. Who cares ? After all, the man had once promised the people of Kumasi that he will bring the Atlantic Ocean to Kedjetia. But by far the era of the greatest kindness of the State was during the era of Flight Lieutenant Jerry Rawlings, Junior Jesus and.....well, somebody's son. Kindness became a national past time engaged in by all - the State, friends, wives and all. 'Friends' began sending children of State officials to exclusive schools abroad. Wives were buying state owned companies with soft loans from the State. Friends were buying expensive cars for State Officials. Wives were traveling abroad with huge trading accounts. Millionaires - and I mean dollar ones - connected to the State power were springing up every where. Kindness was in the air and even the World Bank poured some kindness into the mix and which was subsequently directed into the `kindness` channels. The Ahwoi brothers were lavished with kindness. They were given loans to set up a company to buy Ghana's cocoa and sell it back to CMB. Wow! Goosie Tanoh was given a big loan to buy cassava and export it for dollars. He rode this act of kindness, being part of the State power, before he and his boys bit the hand that fed them and set up the National Reform Party, that does not seem to have anything to reform, except some drivel about the moribund vision of the 'goldsmith's son. Today the Kuffour government is living up to the tradition of `kindness` and, already leaks about the benevolence of the State are reaching us through the formidable Ghanaian rumor pipelines. Unfortunately, most of the kindness of the Kuffour government has been done before so there is not as much creativity in their acts. Like the Minister of Presidential affairs and Information, Mr Jake Obetsebi Lamptey, who turns out to be a contractor renovating the slave castle - uncreative kindness. Or the Sports Minister who took $45,000 from the disgraceful national soccer team - pure blatant `kindness`. Or what about Easylink Transport and Kuffour`s brother, a part owner who rose from the obscurity of a tiny Ring Road office into the plush squatters that allowed him and his company to import twenty-year old right hand busses to finish off their life span in Ghana. Maybe that generosity! to the Presidents brother can be called creative. I`m sure you will agree gentle reader. My kindness brought me to this! It was a `grievous fault` and `grievously` had Kutu answered for it. But those words sum up the whole nature of the State in Ghana, and all of colonized Africa. The State is essentially an instrument of benevolence from whence those who preside over it lavish extensive patronage on their party members, fellow soldiers and hangers on. It is the teeming masses who are left behind in the social contract, for such a state does not guarantee to them the means for their security and well being. But the masses have not been entirely passive as the State pursued its generous mission. They have contributed in their own way to the disintegration of the Ghanaian state. They have abandoned the country in droves such that almost a ninth of the Ghanaian population reside outside Ghana`s borders, and the cream of our processionals ply their trade outside Ghana.! Cocoa farmers have responded to the misplaced generosity by smuggling their produce to neighboring countries instead of selling it to the Ghanaian State which pays them less than the world price and appropriates the difference for their benevolent activities. To arrest this debilitating state of affairs necessitates an examination of the nature of the Ghanaian State. Of course there is not only a political solution to this predicament since politics is but a concentration of economic interests, and so any solution to this extremely centralized state must also examine the neo-colonial economy as well. As a start, however, this extreme centralism that possesses no institutional safeguards against the abuse of power and excessive kindness must be thoroughly decentralized. I`m not referring to the sham decentralization in the District Assemblies, that has merely become the decentralization of patronage and privilege by the central government. Neither am I referring to the current useless debate about whether District Chief Executives should be elected or not , and whether the district Assembl! y elections should have a partisan basis to it. The district in Ghana is too small a unit to pursue any independent planning. Rather, I am advocating the election of Regional Ministers and regional executives and legislatures, that will be totally responsible to those who live in the region. Such elections could be held on a partisan basis if and only if the constitutional provision banning regional and ethnic base parties were abrogated. What is so wrong with the deprived people of the Northern regions founding a party to only take care of their interests? No other party has been able to do that for them.
With regional governments and the central government having clearly defined roles, and a clear responsibility to the people, maybe the `kindness` that emanates from the extreme centralism will abate.