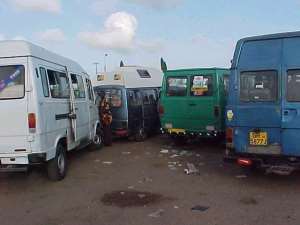 By Jos Anyima-Ackah "TRO-TRO." This is the most popular name for the fleet of private transport vehicles plying in the cities. But do you know its origin? It evolved from the Ga language word "TRO" meaning three pence, that is, the penny coins that were in use in the colonial days of the Gold Coast, now Ghana. Those vehicles charged each passenger three pence per trip, hence it was dubbed "Tro- tro” Though the penny is no longer used, and the fare has been inflated in multiples, the old name still stands, obviously as a reminder of the transport service that operated in those good old days when life was simple and easy - going. Incidentally, it is interesting to note that the same type of vehicles in Kenya got their name from the fare of three 10 cents, a trip per passenger as charged in Ghana. In that country, the vehicles are called "MATATU", the suffix "TATU" in Swahili means three. In form and style, the Tro-tro have changed over the years. They were mostly wooden BEDFORD and AUSTIN lorries of British make, having rows of wooden seats as well. Later, these were phased out, as modern means of public transport, the mini buses, were introduced. At first, these had two parallel metal seats on both sides, where passengers sat face to face in the two rows, some with their hands stretched over the shoulders of other passengers. This was the reason why such vehicles were called "Fa wo sa beto me kom mu", literally meaning "put your hand around my neck" Currently, a few of these are still in the system. But the majority of the Tro tro are equipped with cushion seats facing the direction of the driver. Some of the Japanese BESTA and GRACE models have the first row seats looking face to face. Of course, they were designed for office, family or private business use, and not for mass transport service. Again, while many of the Tro-tros are 14 - 21 seaters, the large ones like the WILLOWBROOK Space and TATA buses carry more passengers. Their big capacity helps to clear out the congestion of passengers at the lorry parks, especially during peak periods when there are long, winding queues. Helping to facilitate transportation, the Tro-tro plys short and long routes from lorry park to lorry park, located at strategic points in the suburbs, bringing commuters within the proximity of their homes and workplaces. The network, of routes are linked to the marketplaces which means easy movement of goods for sale to consumers. Their work starts as early as dawn and closes late in the night. Even for some of them, there is no break, since spare drivers take over when the master drivers retire to bed and resume the next morning. So, for 24 hours, there is Tro tro service in the cities. What is more beneficial is the fare. This is low, being in line with the traditional name of the Tro-tro. From time to time, the fares are hiked, especially when fuel prices are increased. This action raises hue and cry among passengers. But whatever the effect, they have to bear it. The least fare for the shortest trip from, say the Kwame Nkrumah Circle to Kaneshie is ¢500. This is referred to as “scale fare”, which is charged when the Tro-tro loads at the base station. Within the trip, the fare is usually reduced, and the number of stops and passengers picked along the route determine the amount of fares collected per trip and the turnover for the day. This account points to the plight of the Tro-tro operators, which is an experience of strain and stress. They ply along bad roads, which result in frequent breakdowns. Heavy traffic jams make turnaround difficult and long. Prices of petroleum products, spare parts and accesories, licence fees and insurance premiums are on the increase. Eventually, there is little money left for maintenance and repairs, hence the poor condition of most Tro-tros vehicles. But despite all the adversities, the Tro-tro remains the backbone of urban transportation in Ghana. When the municipal bus service has totally run to a halt and varnished from the scene, it is the Tro-tros which have been in operation till today, keeping the mass of people and the economy moving. Indeed, the Tro-tro owners, drivers and mates must be highly commended in glowing term. On occasions of presenting national honour awards, the corps of Tro-tro operators must be recognised for their meritorious services to the nation. Let the Minister of Transport and the President pay priority attention to this commendation. In appreciation of their enduring hard work, I hereby propose a toast to the great transport service of Tro-tro. Join me in saluting all the operators.

Let’s avoid violence, anything that will tarnish image of NP...
35 minutes ago