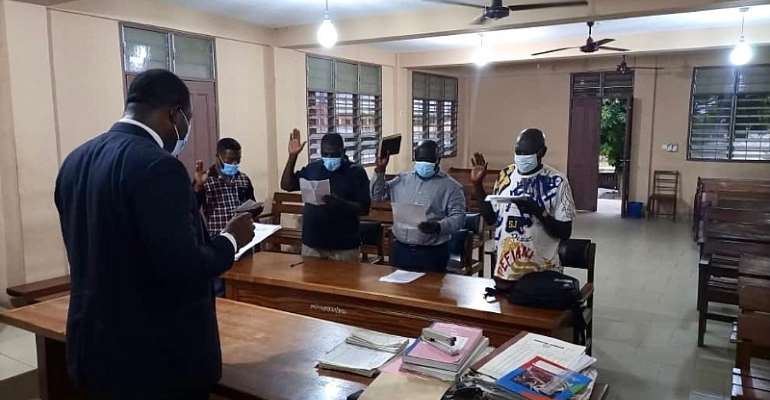 The Ashanti Regional Minister, Simon Osei-Mensah (Hon?), has been acting in a suspicious manner bordering on criminality to have the president’s nominee District Chief Executive (DCE), Samuel Addai Agyekum, approved as the substantive DCE for the Kumawu Sekyere District.

He has been putting words in the mouth of the president, as though the president was the very person that said should the assembly members continue to vote to reject Samuel Addai Agyekum, he will bring someone from outside the Kumawu Sekyere District to make him a DCE over the district.

Following that statement, I had to publish an article to chastise the president for ditching his democratic credentials to act autocratically in contravention of the Ghana 1992 Republican Constitution. However, with the new evidence in my possession which I am publishing in this article for public scrutiny, it likely tells that it is not the president but the Ashanti Regional Minister, Simon Osei-Mensah, who is behaving irresponsibly lawlessly to court animosity for the president in both the Kumawu Constituency and district.

Following the assembly’s voting on 6 October 2021 on intent to approving or rejecting the president’s DCE nominee, where the nominee eventually ended up being rejected, the Ashanti Regional Minister on the same day took an unlawful step directed at sabotaging the wish of the people.

He wrote a letter on the same day after the election, to withdraw four of the government appointees on the assembly to replace them with four new ones. He had them sworn in the same day. He did this in the belief that the four withdrawn ones had voted to reject the president’s nominee, thus, Samuel Addai Agyekum. Therefore, the new ones he was bringing in would surely vote for Samuel to get him approved according as wished by the president.

I have a few questions to ask both the minister and the president. I need answers to the question to set my mind at rest.

1. How does the president appoint his allocated number of appointees on the Local Government metropolitan, municipal and district assemblies?

2. When does the president appoint them and how long should they serve in that capacity?

3. When and how can the president withdraw his said appointees to be replaced?

4. If the president replaces his appointees on the assembly immediately following a vote of rejection of his MMDCE nominee, but insisting on the approval of same nominee, does it, or it does not, constitute an illegality and abuse of power on the part of the president?

5. Does the president nominate persons for Metropolitan, Municipal, District, Chief Executive (MMDCE) to help ensure the government policies on development of the nation do really get to the ordinary persons in the towns and villages for their benefit as a people and their localities? Or, he does so only to ensure that his name simply reaches every nook and cranny of the country to make him popular?

6. Can the president delegate his power of appointing his share of the assembly members to a Regional Minister rather than the Local Government Minister?

7. Does the Ashanti Regional Minister have the right to withdraw some president-appointed assembly members to replace them with those of his choice, with or without the knowledge of the president? And, if yes, is it in conformity with the relevant Constitutional, parliamentary or Local Government requirements?

8. If the inhabitants of a district who know themselves much better and know who can represent them effectively as MMDCE, decide on their choice through their assembly members representatives, should the president override their decision to impose his own favourite choice on them? If yes, can the president please explain why?

9. How in the view of the president does a person become a citizen but not a spectator? Is it when the person exercises his or her God-endowed wisdom to know what is wrong and right for them and act accordingly without fear or favour? If yes, does one voting to reject a DCE who has not performed during his four years in office to call for another one make the person a citizen or a spectator?

The questions can go on and on but time and space will not allow for that.

The Regional Minister has allegedly alerted some people to the president’s resolute determination to have the locally-established non-performing Samuel Addai Agyekum approved as his new but continuing substantive DCE for the Kumawu Sekyere District. It was following this probable false alert that I was angered to put out my publication below.

Is the president aware of how the Regional Minister has corruptly sought to influence the results of the Kumawu Sekyere District DCE nominee’s approval vote? If he is not, I hereby attach copies of his letters and swearing-in ceremony of his four newly appointed assembly members as taken place on 6 October 2021.

Before then, my hurried research into the appointment of the president’s share of the assembly members has brought to knowledge the following, according to THE LOCAL GOVERNMENT SYSTEM IN GHANA under subtitle 3. STRUCTURE OF LOCAL GOVERNMENT subsection 3.3.1 Assemblies.

“Seventy per cent of members of the assembly are elected by universal adult suffrage, whilst 30% are appointed by the president on the basis of their experience and specialised expertise”.

Were those appointed out of desperation really sanctioned by the president or by the Regional Minister who is a friend of Samuel Addai Agyekum?

If the president was not the one who requested for such hurried changes but the Regional Minister, to cause disaffection for him, what will he do about it? Will he reprimand the Minister and have his changes abolished or he will let it stand because it has already been done, although illegal as it is?

The law as stated above, does not bequeath to a Regional Minister the right to make such appointments but the president.

From my periodic investigations into how Kumawu Constituency and district are faring under the presidency of Nana Akufo-Addo, through the Member of Parliament and the DCE, not any good news comes out of it. I don’t blame much the MP but the DCE, whose job it is to ensure Kumawu district gets her fair share of the national cake in distribution by the president.

Any public reader coming across this publication should please convey it to the attention of His Excellency the President, Nana Addo Dankwa Akufo-Addo. We should in no way allow a corrupt Regional Minister to soil the president's hard-earned reputation by the minister's parochial interests.