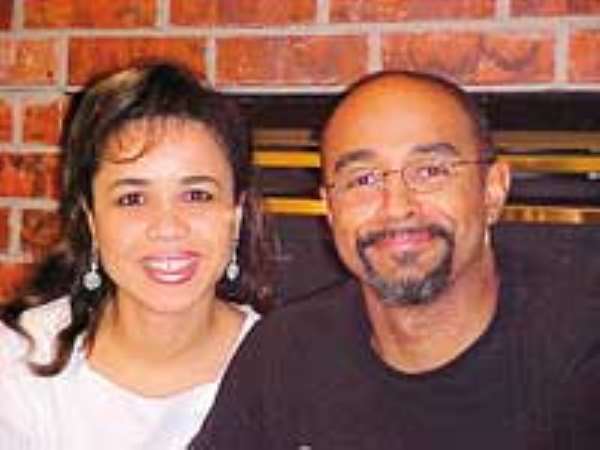 Born in Moscow, Russia, raised in Ghana, West Africa, now practicing medicine in Shawnee, Dr. Caroline Taylor has journeyed far in her life, yet remains an unassuming, soft-spoken woman who only wants to help people.

Her father was from Ghana, her mother a native Muscovite; they met while studying in Moscow universities and married.

When Caroline was a year old, they moved to Ghana where her father practiced medicine and her mother taught French and Russian languages in an university. Even with the racial and cultural differences between a Russian mother and African father, Taylor said she and her two brothers grew up in a happy home.

"As kids we grew up really happy with our surroundings and our backgrounds, with lots of friends, even with Mom and Dad's different ideals when the cultures clashed," Caroline said. Her mother made sure that her children learned to speak and read Russian, English and French, as well as two dialects of Ghana.

Although both parents were atheists, the children were sent to Christian schools. Taylor said she doesn't understand her parents' reason behind this but, "That's where I got my first exposure to religion and Christianity. I feel that God had already mapped out my life for me."

In 1982, at the age of 17, Taylor moved back to Moscow to attend a university that offered scholarships to students from third world countries. There she met students from 107 countries. At this time she lost touch with Christianity.

"This was an atheist society; the law prohibited church," she said. "There were beautiful museum-type churches all over, gorgeous cathedrals, but none active, other than the ones where the monks studied. From 1982 to 1989 religion didn't exist for me."

Upon graduation, she moved back to Africa to do her residency, which is where she met her first husband, an American cardiologist studying the practice of medicine in Africa. Eventually moving to her husband's home state of Minnesota, Caroline spent most of her time studying for the American medical board exams while trying to deal with marital problems, both her own and her parents'. She became very depressed.

"For one year of my life, I was alone most of the time," she said. "There was nothing but deafening silence in the apartment building and my books. Many times I felt like giving up and going home to Africa."

But she didn't give up. She passed the boards, worked her residency in internal medicine at a Minnesota hospital, filed for divorce, and began to make new friends.

Through acquaintances, Caroline was invited to attend church and once again found herself accepting God into her life. These same people introduced her by telephone to the man who became her second husband. Rodney Taylor was working at a book store in Westchester, N.Y., and the two for two months before they finally met at Grand Central Station on New Year's Day 1999. Seven months later they married, but remained living in separate states until Caroline could decide where she wanted to practice medicine.

Dr. Taylor received a job recruiter's phone call inviting her to come to Shawnee (in Oklahoma) to visit the Shawnee Medical Center Clinic and the hospital. She discovered a special affinity for the people and the work she would be doing here. A big plus was that Oklahoma Baptist University was close by for Rodney to continue his schooling in religious studies.

Taylor talks about the paths her life has taken as God's plan for her.

"It's been a growth experience to move to a new place as a new couple, to get used to being married again, but it's been a wonderful time," she said. "God has been with us the whole time. We've been blessed and I am the happiest I've been in a long time. I'm in a very comfortable space."

Dr. Caroline Taylor said she loves what she does, loves her husband, and loves God. Someday Caroline and Rodney want to have children, but for now her passions are her husband and internal medicine. She speaks about how the majority of her day is spent working and the pleasure it gives her, but what little spare time she spends with her husband becomes the serene quality it only took traveling three continents to find.