Why Mahama is still the best for Ghana as president 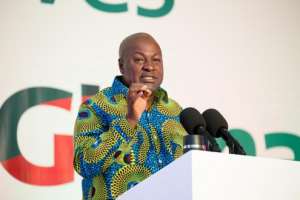 All human beings have inherent traits which determines their character. As much as some of these genetically determined characteristics are very positive and beneficial to society, others are malicious and dangerous. These traits are known as the psychological triad or dark triad. In his book, "Psychology and Manipulation", Zac Adams says that psychological triads comprises the three personality traits known as narcissism, Machiavellianism and psychopathy.

According to him Narcissists speak highly about themselves and would not necessarily put their image up for scrutiny. Arrogance and artificial superiority are two of their noticeable traits. One thing that sets them apart from "normal" personality type is their extreme lack of empathy towards others.

Machiavellianism was named after Niccolo Machiavelli who was an Italian writer and philosopher. Machiavellians use lying, cheating and deception to get what they want. The are very cold, cunning and ambitious. They lack empathy and enjoy hurting others for their own personal gain.

Psychopaths severely lack the ability to feel any form of guilt or empathy towards people, and show little to no signs of remorse when they inflict pain or damage to others. I haven't mentioned any names please. I don't want any trouble!

According to Zac Adams, it is possible for a person to exhibit all the triad traits at different times in different situations. It has, therefore, become extremely important for people to consider traits of politicians before choosing them as leaders. Any leader with any of the three triad traits is a catastrophe because such leaders are naturally insensitive to the suffering of people, and will do things for their personal interest and comfort.

The good news, however, is that there are leaders who are altruistic by nature, and have traits which are converse to any of the triad traits. Former President John Dramani Mahama is one of such leaders. He is extremely honest, selfless, fair and empathetic towards others. He feels the pain of the ordinary disadvantaged Ghanaian and the rural poor that is why he did so much within his 4-year term as president to assuage the suffering of the masses. And I am going to give a plethora of evidence of his achievements.

Whoa! That is incredible, isn't it? The people of Ghana will be enthused about his second coming and are ready to support him. For him to garner over 6 million votes in the last presidential election is a clear justification of this. It is for the NDC to fully understand the intricacies and the taxonomy of the time that John Mahama is the best bet for Victory 2024, the time is ripe for a solution, and the moment to push is now! If this is ignored, the long-term damage to the NDC’s electoral fortunes in future will be grave; because the most serious risk for them is to put their most potent player on the bench. It is, therefore, critical for the Umbrella people to present him as their flag bearer for 2024.

They shouldn’t be bogged down in a morass of petty conflicts because the threat of the party staying in opposition beyond 2024 remains, and the NDC is vulnerable. This could bring a crisis of a new order of magnitude; therefore, they should blur the lines between selfishness and selflessness. They should unite around common values to accomplish Victory 2024. They should do it. They should just do it. They should not hesitate. They should never hesitate. If they work together they can make that difference! Supporting JM for 2024 will be more immediately rewarding.