The Son Of Man And The Concept Of The Abode (2) 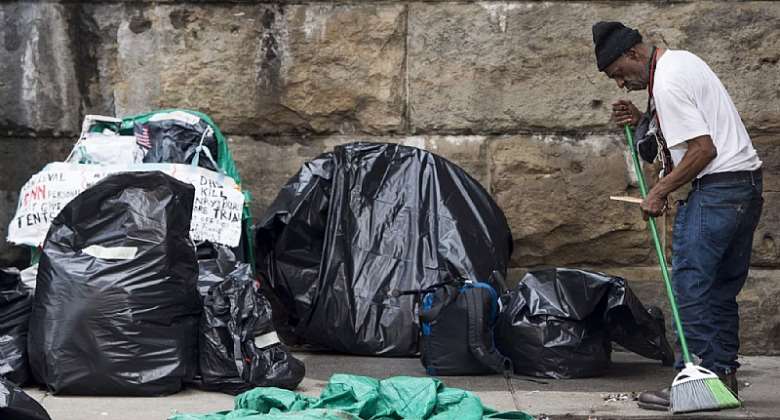 Still painting a picture
In giving to Caesar what belongs to Caesar, the people of the developing world are quick to find Caesar’s belly running deeper than expected. For where two or three are gathered together in the name of a country, there is money concerns amidst them—this is in the Bible. To effectively build a nation, the citizens contained therein must make their individual contributions towards the running of said nation—towards the provision of basic and fanciful necessities for the common good. We are all aware of this. And to do this, a government instituted to represent the people must employ means that are effective—that do not leave the pockets of the people running dry.

Because what are well-remunerated Presidents and First Ladies and Gentlemen to a people when they barely have enough to go by? What is a national cathedral to them, when they, the sons and daughters of man have no place to place their heads? (Come to think of it, we could open up the cathedral for the homeless to lodge in when church is not in session oo, and use this verse “come to me, all you who are weary and burdened, and I will give you rest…” as argument. This is a great idea, isn’t it? So long as these camped homeless folks do not end up, like most of the church folks, turning the cathedral into a den of thieves—selling this and that; with money changers conducting their trade; and some selling doves; others, crows clothed as doves; selling God, merchandising the Word of God, selling the favour of God; oil meant for cooking, wasting them as pretend anointed, etc.—so far as these people do not indulge in these activities, this lodging idea seems like a good one, does it not? I think we have really stumbled upon something. You let’s finish building it so we can properly decide.

All these things are beautiful, it is nice for a nation to have them, so they can point to them and say, “See what we’ve got!” “We built this city! We built this city from rock n roll!” But… alas, what is it that the Akans say? Y’eye de3 3s3 ansa na y’aye de3 efata. What use is the Washington Monument to the American, or the Eiffel Tower to the French? Purely decorative—at best a symbol of national pride. And in our case, the national cathedral will be where God Himself resides. The American, the Dutch, or French can lay claim on God all they can, paint Him as much as they want in their own complexion, but we…we will say, you see this national cathedral of ours, ‘hence’ is ‘whence’ God abides.

On Tax and Non-Tax Revenues
It is in this sense—the sense of the government needing to fill its pockets to be effective—that I find a certain dynamic particularly interesting. This dynamic regards tax and non-tax revenues needed by governments to function. I know, we are supposed to be talking about the housing issue, but let’s see where this takes us.

After the government has taken from the people in the form of taxations—on income, on sale of goods, services, on exports and imports, etc., the people must have enough in their own pockets to go by—enough for among others, a place to lay their heads, be they rents or the acquisition of their own homes. But if the government does not take, sufficiently, contributions from the people—all things being equal—infrastructural works comprising, among others, the construction of roads, never see the light of day. And that will affect particularly, the low to middle income earners. Because we, seeking to cut down housing costs, get or put up apartments that are miles away from city centres—our workplaces, and hence have to traverse long distances each and every day to get to work. Because bad roads are not for the faint of heart—one is quick to find that in cutting down rent costs or cost of acquisition of one’s own homes, one has traded a heart for blood—one cannot function without the other. So, you are paying rent lower than you would if you chose one in the heart of the city. But in doing so, you find yourself spending higher on transportation than you would if you stayed in these city centers—on fuel, trotros, and/or taxis. I believe that’s what they call ‘catch-22’. You get to work, traffic-beaten, angry, tired, and unmotivated. I believe these are what they call ‘recipes for firing’.

Tax revenues are a fact of every national life. Two things are guaranteed in life, they say, death and taxes. But what if the government had another means of raising funds for national upkeep? Enter, non-tax revenues. Enter, public housing—helping make rents lighter burdens for the average citizen. But we the citizens of Ghana can only dream…

At this Point We Are Criticising Everyone
Many developed countries, sitting in their ivory towers (constructed with our ivories, to boot) find themselves philosophising—critiquing a continent whose destruction they had a hand in. “Why do developing countries tax their citizens so little?” They find themselves wise enough to answer their own queries most of the time. Because of wealth… (wealth of which they from the very inception stole from…3y3! Enough of the accusations, erh?)

They find themselves with authority recommending, “Africa should increase taxation of its citizenries. Taxes are a ‘key development tool’, ‘taxations provides means for governments to invest in human capital, infrastructure, provide services to citizens and businesses contained within it alike…’ the list is long.

I say this—interspersed with those factual White accusations—as though taxation was a bad thing. But that is quite obviously not the case. Taxation is a crucial development imperative that a nation cannot do without. It is so crucial that its misuse, no matter how slightly done, no matter how religiously leaders adhere to MJ’s ‘Smooth Criminal’ approach, have ripple effects that are felt by nations of twenty-five million, three-hundred and thirty, or one billion people. Let’s narrow the immense benefits of taxations to this particular one for now: ‘investment in the provision of services for citizenries’ and in particular, the provision of public housing.

Because sometimes it does feel like our government—characteristic of governments worldwide, if they be allowed—choose the easiest way out. In solving a nation’s housing problem, it is not enough for a government to decide: ‘Okay, WE are just going to provide enabling legal and regulatory framework for the housing sector, and YOU (being us, the private sector) do the actual building and provision of houses for the rest of you all.’ There is no way such a system will reap the desired effect—the desired effect of national development which has subsumed within it, the concept of an efficiently housed populace.

But this has been the case for the Ghanaian for so long. Our leaders being learned, being one to take the rules of the English language more seriously than the Monarchs of Britain themselves, pen the most elegant of national legislations, and erect institutions for the implementations of these legislations, and sweep the rest of the development imperatives under the carpet, hoping that by so doing, 1 minus 1, by the infinite miracle power of God, will lead to 2.

The housing sector, left to the devices of the private sector—of which we are all ‘complicit’—will without doubt devolve into a fiscal jungle. You cannot leave pricing, in the belly of this capitalist nation, in the hands of the private sector, and expect the laws of demand and supply to treat the people gently. It helps when the public sector itself, jumps into this ecosystem, just as the Son of God—the son of the world’s Landlord jumped into our situation 2000 years ago, and being a leader as it is, drive price trends with its modest pricing—one which is more concerned at serving the public good than it does quick profits.

So why haven’t our government jumped yet—and effectively, I must add?

Still Upset About Some Contributions I have Made in The Past

But we have seen this tried many times before by governments upon governments, you see. Ghana’s public housing initiatives have been as unsuccessful as my old church’s bid to purchase a land for a new church building. I wish I was joking. It took me to get to my twenties to find out that a single individual could purchase land. Because for as long as I could remember, the church I attended in my childhood would always collect ‘collections’ towards the purchasing of church land. I can tell you the number of potential toffees and ‘abele walls’ I have been deprived of that have only ended up buying an invisible land. And I tell you, as we speak now, the church is still taking that same offerings—yet, no land has materialised.

This is same with the rest of us all Ghanaians. The Ghanaian has receipts upon receipts on our various governments, on public housing initiatives commenced but left as white elephants—abandoned, occupied by the ancestors perhaps. At this point when I hear the words ‘public housing’ my heart sinks as deep as it does when I hear any church I attend calling for offerings to purchase church land. One of these two institutions have to change their ways if Ghana is to prosper. Hallelujah?!

Blind, Ungrateful People
But we the people too, we can be quite ungrateful oo. Nothing impresses us—perhaps that’s why our governments give up so easily and quickly. I quite remember, a friend of mine going on and on about how he was having a hard time getting an apartment to rent. I found that really shocking because all around me—from the house to work, and right at the heart of Accra especially, I saw apartments springing up. Many of them were even completed. They must have all been a mirage to him, if he claimed he couldn’t find an apartment to rent. So, me, a good Samaritan, having stumbled upon one building with contact details and price list detailed on a banner spread across its wall, took a picture of it, and sent it to this friend of mine. Yes, the Mirage Residence—right at Airport, a skyscraper, too ambiguous to miss. How could he have possibly missed it? He must have thought me crazy, because that is exactly what he said.

God must have been making fun of some of us when he said, “Wani b3hu Canaan but wo nan nsi hor.” Because it sure feels like it in this country. Here we are talking incessantly about the housing deficit our nation is plagued with, when increasingly apartment complexes are springing up here and there—complexes so high up in the sky that, if one does not get space on the ground, one is guaranteed one in the sky.

Let them eat cake—that must be what our governments have meant to tell us all along. Because they, sometime back, intending to cede over public lands to private hands, so that the latter could help bridge the housing gap, did so corruptly. In the end these lands ended up in the hands of a ‘fortunate’ few—friends, family, party supporters and sympathisers, etc. and instead of bridging the housing gap by making available housing complexes for the low to middle income earners, these developers, these private individuals, being of nature profit-oriented, did exactly what we all, if blessed with the resources, would do—target the rich segments of the populace. And this has ended up doing arguably, the opposite—widening the housing gap. So, there you have it, amongst others, complexes that are mirages—seen, but not seen.