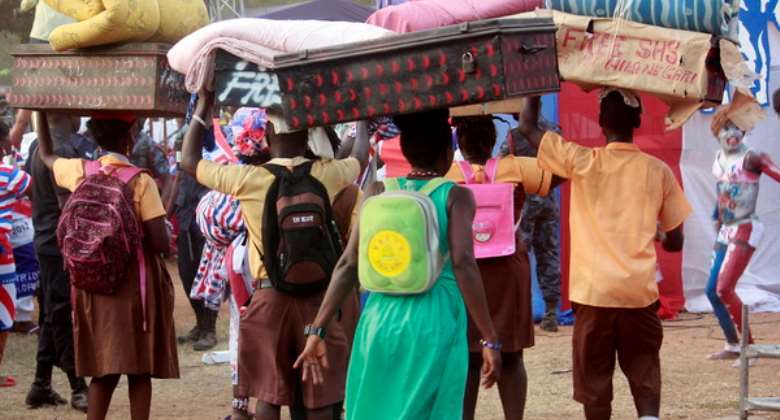 There appears to be serious food shortage in Ghana’s Senior High Schools.

Students are fed up with a repeated menu for weeks now.

The shortage is blamed on the school’s inability to get some food components to serve the children the required plates of nutritive value.

Some heads of the schools who want their name placed on ice have alleged that government failed to give them the 30 percent feeding component to purchase some perishable foods which are not covered by the National Buffer Stock Company limited, the supplier.

Students, according to them, have no choice but to eat their breakfast with insufficient morsel of bread or mostly without bread at all. Sadly, they have no one to complain to, as they stand to be punished for complaining.

Parents of female students especially have now been overburdened with extra costs as they have to repeatedly send monies to their children on campus to ensure their comfort and also preserve them from the 'bad boys' who would want to take advantage of them.

The situation has become worse to the extent that first year students who were supposed to have vacated on September 15, 2021 have been asked to vacate today, Friday, August 27, 2021.

A Headmaster of one of the schools hinted that they had a directive to let the students go home to avoid further embarrassment as the feeding challenge soars.

Our source says the students were notified on Tuesday that they were starting exams on Wednesday and will have to go home on Friday.

“So they wrote two papers on Wednesday, they will write three on Thursday and three on Friday after which they have to leave latest by Saturday morning.

"Imagine these little children writing three papers daily, when their minds have not even been prepared well enough for the exams”, it said.

The first year students who are struggling through the uninformed but crushed examination period, are not even thinking about that.

“We are even happy they say we should go home, at least we will go and eat our mothers’ food. Food at the dining hall has become endangered species this term because if you don’t go there early, you won’t get some to eat, even while you are there, the food they will serve for a table of 12 or 14 is even not enough for eight students”, one of the students whose school is closer to a well-known highway in Kumasi lamented.

Parents have not been left out in the pressure accumulating from the shortage of food.

Just when they thought everything has become free in the NPP's much-touted Free SHS, a new cost, apart from paying for extra classes for their wards, is making them send weekly stipends to their wards for food.

A father of a second-year student told ModernGhana News that this term alone, he spent about GHC50 weekly on his daughter for “food top-up.”

This is apart from the provisions he bought for her at the beginning of the semester.

“My daughter for instance finished all the provisions we bought for her at the beginning of the semester within a month because she largely depended on it. So I had to be sending her at least GH50 cedis every week”, a worried father noted.

When asked how a mother feels at the news of her daughter coming home on Saturday, he said “I feel relieved she is coming home. At least she will eat good food at home and spare me the agony of sending money for food almost every week. We really wanted free education but we have realized no free thing is good except Christ,” she noted angrily.

In an interview with the Senior Manager, Corporate Affairs of the National Food Buffer Stock Company Ltd, Mr. Emmanuel J.K. Arthur, he insisted they duly supply the required quantity of food components agreed upon with the Ministry of Education.

Even though he admitted that prices of food have been fluctuating for some time now leading to the need for proper engagement with some of their suppliers, he noted that they have tried all means possible to live up to their responsibilities to the schools.

Mr. Arthur challenged the assertion that there is food shortage in the schools, arguing that it is some food components they may lack because “we do well to supply them everything we need to”.

He explained that if the schools lack perishable foods like vegetables, eggs, fish meat, bread and others, it does not fall within their responsibility.

He also accused the schools of not having enough storage spaces to contain all the food they will need for the whole semester.

Mr. Arthur added that there have been times the National Buffer Stock have had to return some percentage of the food meant for certain school to their warehouses till the schools have space to receive them.

“We have been giving them all the food they require for the past five years, but the problem is majority of the schools do not have enough space for storage of these foods. There have been times we had to send the food back for them to come for it later when they have space.

"And sometimes when you call that you need the food, there will be some delays because of some factors like we may be supplying some other schools, there may be break down of transport, even there can be heavy rains for days which will prevent us from coming until it subsides,” he posited.

In all these, he stressed, “if a particular school has challenges, they can inform our regional manager and we will make arrangements and get them the particular component if we have some in our warehouse”.

He also hinted that they had received complaints from the schools that some of the suppliers usually attempted to shortchange them by supplying lesser kilograms of bags they had been duly paid by the Ministry of Education.

Unfortunately, attempts to confirm or deny the allegation that government has not sent the schools’ 30 percent feeding component to them proved futile as it was not talked about in the Ministry of Education’s press conference held on Thursday.

The spokesperson for the MoE, Kwasi Kwarteng also could not confirm or deny it.

He however quoted the Director General of Ghana Education Service, Prof Opoku Amankwah debunking rumors of food shortage in the second cycle schools.

“The Director General said so far he is concerned, there is nothing like food shortage anywhere”, he said adding, the truth is that a lot of the schools lack proper storage facilities.

“What we should be considering is the expansion of storage facilities for the schools because there have been times the suppliers have had to go back with some of the items due to lack of adequate space for storage.

"…and even that, those food components are resent to the schools upon demand whenever need be, this is what we should be thinking about, expansion of the storage facilities,” he noted.

Mr. Kwarteng also debunked the assertion that the first year students were being made to vacate abruptly to save government the embarrassment of the shortage.

“If they are being made to go home because of food shortage, what will the next stream coming to school eat? Unless they tell us there’s no other track coming to school after this vacation,” he argued.

The PRO refuted allegations that the then first year students had been made to forcefully write their end of term exams and vacated before the original September 15 vacation date because of the shortage.

“If it is because of food shortage, what will the next stream coming to school feed on, won’t the other batch of students eat?” he quizzes.