S.Africa's Ramaphosa pressed to step up fight against party 'rot' 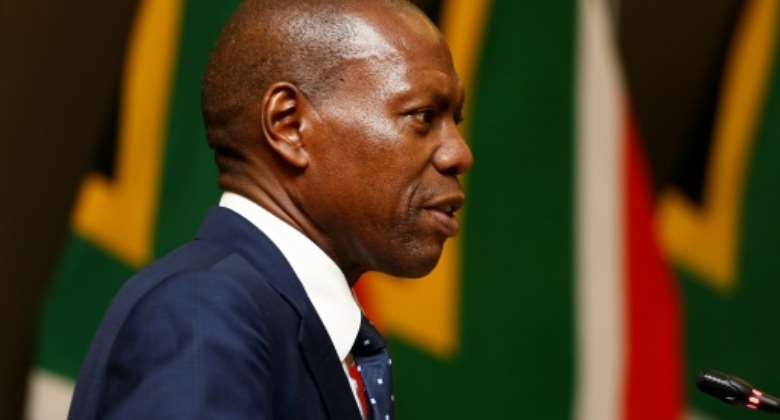 South Africa's embattled health minister has bowed to pressure to step aside over corruption allegations, but analysts say President Cyril Ramaphosa still has a mountain to climb to cleanse the ruling party of graft.

President Cyril Ramaphosa came to power in February 2018 on a ticket to root out the plundering of state coffers that prevailed under his predecessor Jacob Zuma.

But scandals have been rife since then, culminating this year with the case of Health Minister Zweli Mkhize.

Lauded for his response to the pandemic, Mkhize fell from grace over allegations his department irregularly awarded coronavirus-linked contracts to a communications company, Digital Vibes, manned by his former associates.

After being placed on special leave in early June, Mkhize asked to resign on Thursday "to bring certainty and stability" to the post, Ramaphosa said, announcing a major cabinet reshuffle.

But for many the move has come too late. Impatience at perceived foot-dragging to rid the African National Congress (ANC) of graft is swelling ahead of local elections in October.

"The anger... is palpable in the public," Ina Gouws, politics lecturer at the University of the Free State, told AFP.

"The ANC's party loyalties are taking precedent over what's best for the country."

"(Given) the damning evidence against (Mkhize)... it is baffling that it took so long to get rid of him," the head of the main opposition Democratic Alliance (DA) party, John Steenhuisen, said in a statement.

The leftwing Economic Freedom Fighters (EFF) accused Ramaphosa of delivering "just rhetoric" and claimed some of his new appointees were equally mired in alleged graft.

South Africa's Special Investigation Unit (SIU) filed a suit last week to recover the funds from the Digital Vibes contract that allegedly benefited the ex-minister and his son.

Critics say Ramaphosa has achieved little in his declared vow to root out graft. By RODGER BOSCH AFP

The SIU also froze bank accounts linked to the matter and handed Ramaphosa a full report on June 30, which the president can make public at his discretion.

The scandal has gripped the media. An online paper, the Daily Maverick, carried out its own investigation into Digital Vibes this week, alleging funds were channelled to a beauty salon owned by Mkhize's daughter-in-law and other extravagances.

Both Mkhize and his son have repeatedly denied benefiting from the contract.

"Government trust is declining all of the time, even trust in democracy itself is declining," warned Narnia Bohler-Muller of South Africa's Human Sciences Research Council.

A national inquiry into state-led corruption under Zuma's administration has meanwhile been underway since 2018.

Ramaphosa is due to testify for a second time next week, answering questions relating to his time as deputy president as well as his current position.

Zuma, who has not been as forthcoming, was handed a 15-month prison sentence and jailed in early July for repeatedly snubbing the panel.

Theft of state assets was rampant under Zuma's nine-year rule but many South Africans say the judicial response has been too slow. By Emmanuel Croset AFPFile

He is due in court next week for a graft trial, although on Friday the Department of Correctional Services said the 79-year-old had been admitted to hospital "for medical observation."

Other high-profile arrests have yet to be seen.

"We can change Mkhize but the rot goes deeper, much deeper," Trevor Ngwane, a sociologist at the University of Johannesburg, told AFP.

"These corruption scandals are actually soap operas which hide... the failure of our structural liberation to restore wealth to the people," he said.

Still surfing on its leadership in fighting white-minority rule during apartheid, the ANC has failed to restore dignity to South Africa, Ngwane said, noting that half the population lives below the poverty line.

A recent outbreak of unrest and looting sparked by Zuma's jailing has stoked frustrations over worsening poverty.

"There is a bigger crisis... the crisis of everyday life," Ngwane added.

"The majority of South Africans are deeply unhappy about corruption and want to see action," said Bohler-Muller.

"If it doesn't happen soon, we're going to have another period of unrest (and) social cohesion is going to fall apart."

Nkoranza youth clash with police over ‘suspicious’ murder of...
53 minutes ago