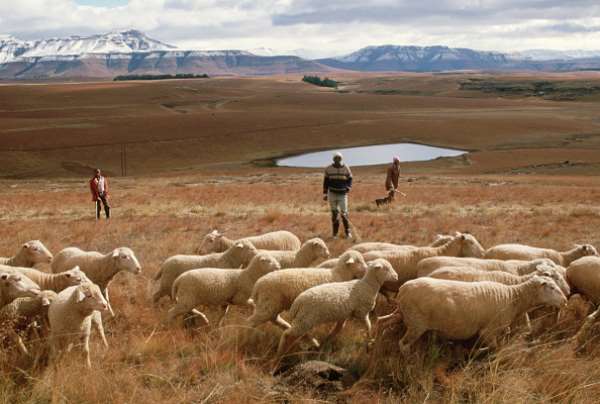 At the same time, the government's farmer support programmes haven't been agile and quick enough to provide the necessary support for beneficiaries.

In 1994 when South Africa became a democracy white farmers owned 77.580 million hectares of farmland out of the total surface area of 122 million hectares. The new government set a target of redistributing 30% of the 77 million hectares within the first five years in government . This target has been consistently moved over the years, and now the aim is to reach 30% by 2030, in line with the National Development Plan's agriculture and land reform objectives .

We argue that things can happen much quicker if the arteries of land reform are unblocked.

One proposal is the creation of a Land Reform and Agricultural Development Agency. Ramaphosa announced the creation of such a body in his state of the nation address in February 2021.

Here, we outline how the proposed agency could accelerate land reform by removing the process from political and bureaucratic control. The state's only role would be to create an enabling environment. The heavy lifting would be the task of landowners, agribusinesses and large corporates. Their job would be to facilitate equitable and sustainable land reform.

We believe that the model set out below, with the agency as proposed by the president as the starting point, would give South Africa another chance to get a meaningful land reform programme under way.

The model could be the vehicle through which farmland can be returned to the majority of South Africans, with two notable differences to previous efforts. Firstly, it would ensure that beneficiaries weren't being set up to fail, as has been the case in the past. Secondly, commercial farmers, who benefited from the past injustices, would have an opportunity – in a non-politicised way and with little red tape – to contribute meaningfully to land reform.

How it would work

The agency would ideally bring about national coordination, reduce red tape, and become a one-stop shop for issues related to a decentralised redistribution of agricultural land. This would not require additional fiscal outlays. It would, instead, use existing sources of material and other forms of support from the commercial agricultural sector.

The agency idea was developed out of proposals on decentralising land reform first set out in South Africa's National Development Plan released in 2012. The ideas in the plan were echoed in a 2019 report by the Presidential Advisory Panel on Land Reform and Agriculture.

The central principle is to locate the responsibility of redistributive land reform with district-level land committees. These would design locally based solutions created on the dominant farming enterprises while considering an area's community and social dynamics.

The agency would take the job of land acquisition and redistribution out of the government sphere and put the responsibility on the shoulders of those who have benefited from the previous regime.

At the district level, farmers, communities, agribusinesses and other private sector role players would craft local solutions within a framework managed by the agency.

Local District Land and Agricultural Development committees would be established within a particular area. They could comprise ten voting members (all bona fide farmers: five black and five white). This structure could then elect a chairperson and invite six other members (agribusinesses, banks, community and so on) to join.

The local committee would have to consult with all stakeholders in the area and register as a non-profit company with a memorandum of incorporation, a budget, and a board of directors.

The functions of the committee would include:

the listing of land,

the identification of potential beneficiaries in terms of objectively agreed criteria,

monitoring of enterprises, and

liaison with government departments and the secretariat of the overarching national agency.

The mechanism would not require the state to provide funds for land acquisition since the land would be made available by farmers and transferred to beneficiaries without any funding flows.

What's being proposed is a form of “self-expropriation without compensation” but on the terms of the existing land owner. This implies that there are no legal processes required to get land for free. It is done automatically by the current landowner and will transfer land to the beneficiary of their choice.

A number of critical success factors would need to be in place before any transaction was set up. These would include: access to land, ownership or long-term lease, skills, access to markets for inputs and selling products, funding, the exit strategy, and a supportive environment.

The district committee would be responsible for coordinating and facilitating implementation in line with the agreed principles.

The national agency would be established by the Minister of Agriculture, Land Reform, and Rural Development and supervised by a board of 12 members who would meet quarterly. A small secretariat would have funding and administrative capabilities to liaise with the local committees.

Its main functions would be to create enabling policies and smooth out bureaucratic logjams, set up a land reform fund, prescribe rules for the local committees and record and monitor progress with land transactions.

To nudge current landowners to make land donations we propose:

Exemption on donation tax for land or finance donated for land reform purposes.

Exemption on capital gains tax when land is transferred to a beneficiary or new entity.

Some recognition mechanisms to upscale voluntary donations. This could be in the form of water rights and access to a land reform fund at beneficial interest rates. The awarding of Broad-based Black Economic Empowerment scores could also be used. These were set up by government to advance economic transformation and increase the participation of black South Africans in the economy .

The empowerment recognition could also be provided to individuals or companies donating funds to a land reform fund.

What we are proposing is a way forward that avoids top-heavy, bureaucratic focused processes. The agency would largely operate virtually. It would only report on progress and make sure politicians weren't hindering the redistribution of land. It would facilitate the process of redistribution of land by ensuring that incentives for donation and transfer of land were in place.

This would ensure limited opportunity for political rent-seeking, jobs for friends, and corruption.

Wandile Sihlobo is the Chief Economist of the Agricultural Business Chamber of South Africa (Agbiz), and also a member of the South African President's Economic Advisory Council (PEAC).

Johann Kirsten does not work for, consult, own shares in or receive funding from any company or organization that would benefit from this article, and has disclosed no relevant affiliations beyond their academic appointment.

Hottest Photo Reports
Catch up with all the political quotes from our politicians.
Advertise here
More Article
ModernGhana Links
Mapping the contours of Jihadist groups in the Sahel
Negative at last – My covid experience
A granular look at UK's COVID-19 'red list' shows why it's deeply flawed
Mobile Money Drives Informal Sector Tax Revenue Mobilization as the Telecom industry paid Ghc3.6Billion Tax in 2020
What the objections to COVID-19 control measures tell us about personal freedom
Children are losing caregivers to COVID-19: they need support
What the objections to COVID-19 control measures tells us about personal freedom
Whistleblowers are key to fighting corruption in South Africa. It shouldn't be at their peril
Tigray war antagonists are reluctant to talk peace: why and what's next
TOP STORIES