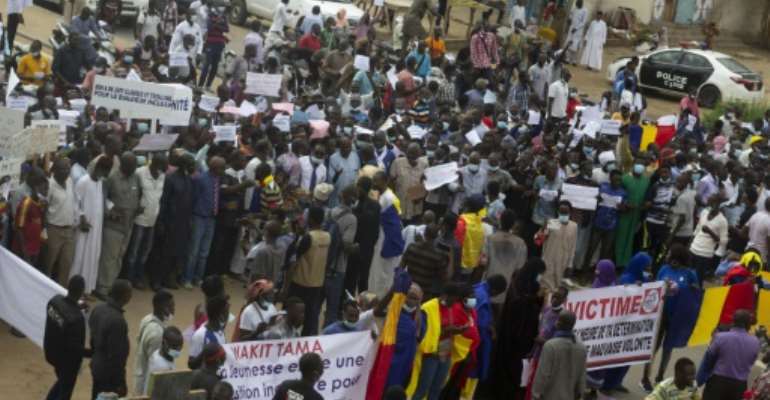 Security forces were massively deployed along the three-kilometre (two-mile) route on a central avenue of the capital, but the protest was largely peaceful. By Djimet WICHE (AFP)

Several hundred people marched in Chad's capital N'Djamena on Thursday to protest against the military junta which took power after the country's long-serving leader died while fighting rebels.

The Transformers party and civil society groups had called for people to come out against "the confiscation of power" by the Transitional Military Council (CMT) that has ruled the poor Sahel country since the death of president Idriss Deby Itno in April.

The council is headed by Deby's son.

The protesters called for a national conference to overhaul the junta's charter and restore democracy in the former French colony.

The CMT announced late Thursday that it would hold a national dialogue in November and December.

In a statement, the junta also said it would organise a constitutional referendum and "free and transparent general elections responding to the legitimate aspirations of the Chadian people".

The CMT is led by 37-year-old four-star general Mahamat Idriss Deby, who has consolidated nearly all powers around himself and 14 generals who were close to his father.

"We are marching to demand that democracy and justice -- the hallmarks of true peace -- be re-established," said a 22-year-old protester who gave his name only as Narcisse, brandishing a sign reading "No to the monarchy".

Security forces were massively deployed along the three-kilometre (two-mile) route on a central avenue of the capital, but the protest was largely peaceful.

Some protesters expressed anti-French sentiment with signs reading "France out of Chad", and by burning French flags.

French President Emmanuel Macron met with the new rulers while attending Idriss Deby Itno's funeral -- the only Western head of state to make the journey.

"France has to choose the Chadian people as its partner in dialogue, not just a small group of individuals," said Max Loalngar, spokesman for opposition group Wakit Tamma.

"Otherwise it will be the eternal enemy of the Chadian people."

The junta earlier promised elections after an 18-month "transition" that could be extended, while dissolving parliament and repealing the constitution.

It authorised the protest on Wednesday after changing the proposed route.

Opposition marches that went ahead on April 27 despite an official ban turned violent in N'Djamena and in the south of the country.

While the authorities said six people had died, a local NGO put the death toll at nine.

More than 600 people were arrested.

The junta has authorised several demonstrations in support of the military regime, but did not approve an opposition march until July 12.

In that instance, organisers cancelled the march after authorities changed the route.