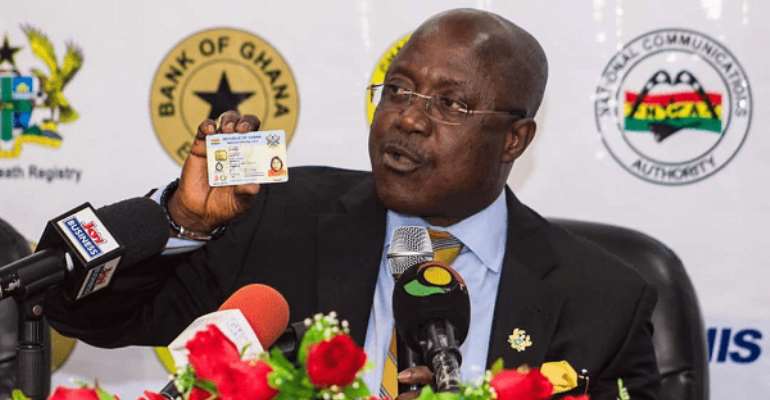 I have not jumped the gun because I wanted to gather all the relevant and necessary facts and evidence before I decided to weigh in on the fact of whether, indeed, my good, old friend Prof. Kenneth Agyemang Attafuah egregiously erred when he categorically and publicly, albeit artlessly, stated that President Addo Dankwa Akufo-Addo did not desire to needlessly and unwisely politicize the employment policy of the National Identification Authority (NIA), by jampacking the payroll of the latter establishment with New Patriotic Party (NPP) foot-soldiers, as it were, and stalwarts at the damnable expense of merit and therefore the smooth and efficient administration of this most significant citizenship validation and data storage establishment.

Well, about his only egregious public relations misstep here was for my old PERSCO (Okwawu-Nkwatia’s St. Peter’s Secondary School Senior) to pretend as if Nana Akufo-Addo, somehow, bore any culpability for privileging professionalism or professional merit and competence over gross partisan cronyism in the hiring of NIA personnel (See “Here’s What Top Politicians Have Said About Ken Attafuah’s ‘Political Neutrality’ Comments” Ghanaweb.com 6/10/21). Irrespective of how any critic looks at it, what Prof. Agyemang Attafuah’s presidential or executive directive points to is the fact that Ghana has entered a totally new dispensation, or a paradigmatic shift, and a new way of doing things in which the country needed to be more efficiently administered by the recruitment of highly qualified civil service employees, and not merely based on one’s membership or affiliation with the ruling New Patriotic Party or any political party that happens to wield the democratic reins of governance.

Per the sort of conniption or volcanic backlash that has greeted the “Attafuah Mission Statement,” or what may be aptly termed or characterized as such, it is quite obvious that until the aforesaid announcement made the broadcast news airwaves and the media headlines, for that matter, raw cronyism, rather than professional and administrative competence, was more of the rule than the exception vis-à-vis the general running of the country’s civil service. Which is why it absolutely ought not to come the least as a surprise that the Sovereign Democratic Republic of Ghana, since the inception of the Fourth Republic, which means that since 1993, the country has not been running as smoothly and efficiently as it needs to.

For me personally, however, what party stalwarts and diarrheal critics like Mr. Kennedy Ohene Agyapong, the New Patriotic Party’s Member of Parliament for Assin-Central, in the Central Region, who have been calling for the Simon Fraser, Canada, doctoral degree holder’s head to be delivered on a diamond platter, literally speaking, ought to prove or affirm to the general Ghanaian public at large, in order to establish their credibility beyond any iota or shadow of a doubt, is the fact of whether the unsavory practice of jampacking the nation’s civil service with party stalwarts, bigwigs and other political associates has facilitated any significant or drastic reduction in the high spate of unemployment in the country. You see, the fact of the matter is that what is most needed presently is the availability of dedicated and committed business leaders and crackerjack entrepreneurs who know how to create long-term nonpolitical and nonpartisan jobs with livable wages and substantial fringe benefits.

Under the previous John “SADA-Nkonfem” Dramani Mahama-led regime of the National Democratic Congress (NDC), politically jampacking or stacking the civil service with diehard party apparatchiks had not significantly alleviated the exponentially high level of unemployment in the country. Which was why in the wake of his seismic defeat by the then-Candidate Addo Dankwa Akufo-Addo in 2016, a clinically distraught Mr. Kwame Gonja would enviously traipse the length and breadth of the country, blindly and criminally promoting Galamsey or illegal small-scale mining on grounds that the government woefully lacked a viable job-creation capacity. No doubt, the Executive-Director of the National Identification Authority could have more diplomatically and constructively explained his administrative and/or professional terms of reference vis-à-vis the hiring policy or protocol of the NIA.

But, of course, foolhardily attempting to scapegoat Prof. Agyemang Attafuah for the cause or causes of a problem that is much greater and more far-reaching than the hiring of dozens or even several hundred employees at the NIA, for at most four years, after which another ruling party will be apt to literally throw them back out on the streets, would definitely not resolve our nation’s chronically high unemployment problems. Folks, ditch this needless frustration and start behaving and acting much smarter than this.