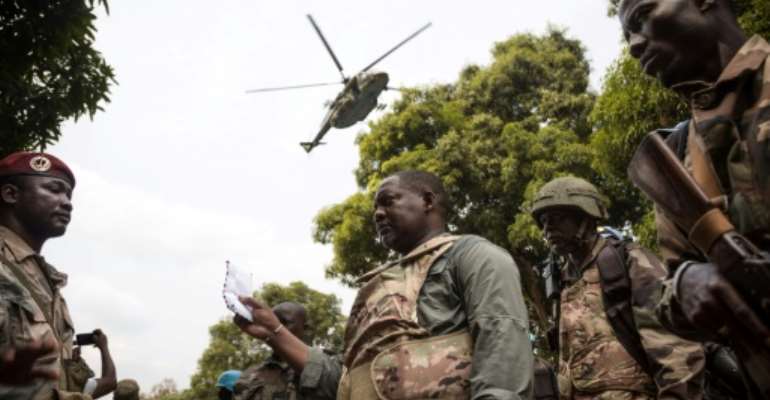 Firmin Ngrebada (C) had been running a country plagued by rebels and dependent on Russian military support. By FLORENT VERGNES (AFP/File)

Central African Republic Prime Minister Firmin Ngrebada and his government resigned on Thursday, setting the stage for a political reshuffle in an impoverished country struggling with a rebellion and a bustup with its traditional ally France.

The premier announced his resignation on Twitter, but President Faustin Archange Touadera's spokesman told AFP he could be tapped to lead a refreshed administration.

"We will know within a few hours if the president keeps the prime minister on," Albert Yaloke Mokpeme said.

A former chief of staff to Touadera, Ngrebada had been in post since early 2019 in Central African Republic (CAR), rated the second least-developed country in the world by the UN and suffering from the aftermath of a civil conflict that erupted in 2013.

He had helped craft a February 2019 peace deal signed with rebel groups in Khartoum.

Touadera was re-elected in December on a turnout of fewer than one in three voters.

The ballot was hampered by armed groups that at the time controlled around two-thirds of the country, and a rebel coalition mounted an offensive on the capital Bangui in the runup to polling day.

Political scientists nevertheless say that in key votes he can count on the backing of large numbers of independent MPs, many formerly associated with the party.

Since December, the army, backed by the 12,000-strong UN MINUSCA peacekeepers, Rwandan special forces and Russian paramilitaries, has wrested much of the territory from rebel control.

The Russians especially are credited with with strengthening the otherwise poorly-equipped national army.

At the same time, ties with traditional ally and former colonial power France have been badly fraying.

CAR troops have been gradually reconquering the country's territory from rebel groups. By ALEXIS HUGUET (AFP/File)

The anger was sparked after a French national, Juan Remy Quignolot, was arrested in Bangui on May 10. An image of him with an arsenal of weapons was distributed on social media.

France has long played a key role in the CAR since the impoverished landlocked country gained independence in 1960.

It intervened militarily to help still a bloody conflict that erupted along sectarian lines after the then president, Francois Bozize, was toppled by predominantly Muslim rebels in 2013.

Tensions over the CAR's friendship with Russia date back to 2018, when the Kremlin sent weapons and a large contingent of "instructors" to train the CAR's beleaguered armed forces.

It has also stepped up investment in the CAR's mining sector. The country's riches include gold, diamonds, copper and uranium.

Last week, Ngrebada was in St. Petersburg, where he strove to persuade Russian leaders to invest further.

Despite the relative lull in violence today, the country remains deeply poor and in need of help.

Conflict displaced hundreds of thousands of people in the first months of the year, while around half the population is facing "high levels of acute food insecurity," according to the UN.