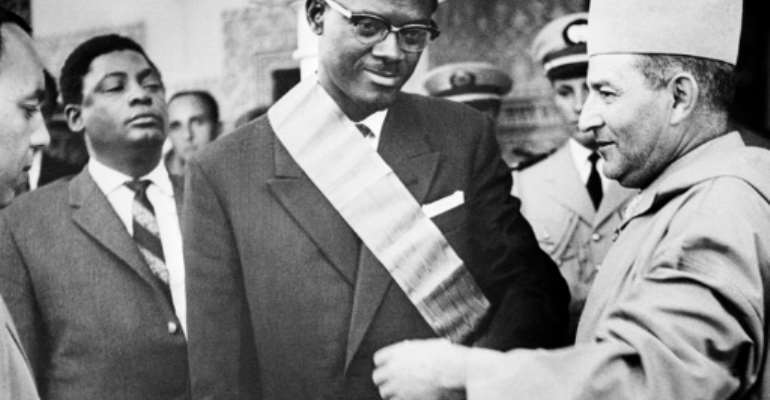 Independence leader Patrice Lumumba, shown here in 1960 in the center, was shot by Belgian-backed rebel troops and his body dissolved in acid in 1961. By - (AFP/File)

Belgium will return murdered Congolese independence leader Patrice Lumumba's final remains -- his tooth -- to his compatriots at a ceremony in Brussels on June 21.

De Croo will represent Belgium at the ceremony, which is expected to mark the start of a new period of mourning for Lumumba, who was assassinated in 1961.

In order for the young leader, the first prime minister of Congo after its independence from Belgium, to be laid to rest his final remains will be taken home.

Belgium once controlled a vast tract of central Africa then known as the Belgian Congo, which became independent in 1960 only to fall victim to Cold War political manoeuvres.

The young independence leader was perceived in Washington and Brussels as a potential friend of the Soviet Union, and Belgian agents were complicit in his killing.

After Lumumba was shot by Belgian-backed rebel troops his body was dissolved in acid, denying his remains to his family, and his tooth was taken as a souvenir.

The "relic" was eventually recovered from the daughter of a former Belgian police chief who had helped dispose of the corpse, after a long legal battle.

As revealed to AFP last month by Lumumba's surviving sons Francois and Roland, the June 21 ceremony will be marked by a two-stage official process.

The remains will be restored to the family in a "restrained" private ceremony, followed by the public event lead by the current national leaders.

When the delegation has returned to the DRC, there will be a second official ceremony in Kinshasa on June 30, the anniversary of Congolese independence.

Philippe, King of the Belgians, had planned to travel to Congo for this moment, but this trip has been postponed to next year because of coronavirus travel restrictions.