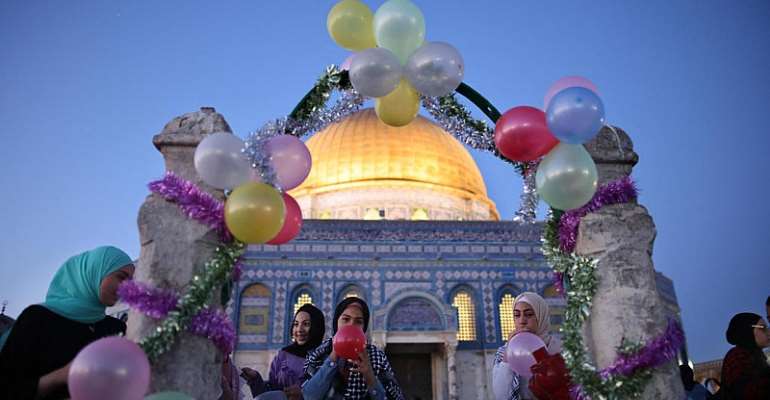 Muslims around the world have been celebrating the Eid al-Fitr holiday, marking the end of the holy fasting month of Ramadan. In many countries festivities will continue through the week, but the spirit has been dampened in some communities by the Covid pandemic and spiralling violence in Gaza.

It's been another unprecedented year for Muslims the world over, marking the end of Ramadan against the backdrop of the Covid-19 pandemic.

In countries like the US and UK, where mass vaccinations campaigns have enabled an easing of health restrictions, Muslims have been able to gather in big numbers for the first time in over a year and celebrate the end of Ramadan.

In Nigeria, the usually joyous three-day celebration was significantly toned down this year as the number of coronavirus cases creeps up. The country has officially registered 165,612 cases, 2,066 people have died.

India marked Eid al-Fitr on Friday with more reserve than usual, after a particularly contagious Covid-19 variant sent infections soaring. More than 24 million people have contracted the virus, 262,317 have died.

Prime Minister Narendra Modi took to Twitter to say he was “praying for everyone's good health”.

In neighbouring Muslim-majority Pakistan, less severely hit by the virus than India, but which has nonetheless lost 19,384 people to Covid-19, women and girls continued the tradition of painting their hands using henna.

Muslim communities in several countries around the world have been showing solidarity with those affected by the crisis in Gaza where Israeli strikes have killed dozens of people, including children.

Several nights of clashes between Palestinian protesters and Israeli police, particularly around the al-Aqsa mosque, spiralled early this week into a barrage of rocket fire from Gaza and deadly Israeli air strikes in retaliation.

Palestinian leader Mahmoud Abbas cancelled official Eid celebrations in the wake of the escalating violence in the region. In East Jerusalem, youths were nonetheless keen to celebrate the end of Ramadan.

Neighbouring Egypt began marking three days of Eid al-Fitr festivities on Thursday. But authorities are concerned this could lead to a spike in Covid-19 cases as the country goes through its third wave.

Official figures stand at 237,000 confirmed cases and a total of 13,972 deaths. Experts say the real figures are higher.

Egyptian authorities have imposed a two-week curfew, but many fear it may not be enough to contain cases.