By Marion DOUET and Hillary ORINDE 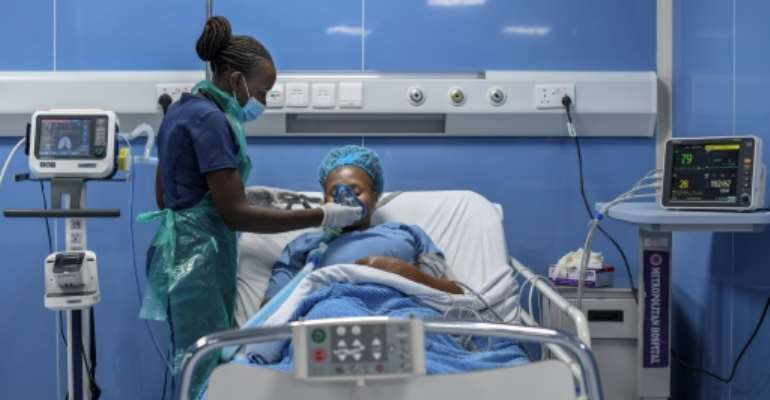 Kenya's hospitals have been scrambling to increase supplies of oxygen fearing the nightmare scenario currently unfolding in India. By TONY KARUMBA (AFP)

At the peak of Kenya's third wave of Covid-19 in March, hospitals -- buckling under the strain of the virus -- saw their oxygen reserves fizzle out.

Since then, they have been scrambling to increase capacity of the lifesaving element, fearing the nightmare scenario currently unfolding in India due to oxygen shortages.

On the roof of the Metropolitan Hospital, a 150-bed private institution that targets the middle class, a brand-new oxygen production unit has just been installed that is capable of producing up to 600 litres of the gas per minute.

Metropolitan CEO Kanyenje Gakombe said the hospital accelerated plans to produce its own oxygen after supplies were squeezed to the limit during the height of the third wave, fanned by the variants of the coronavirus first detected in Britain and South Africa.

Dr Kanyenje Gakombe says his hospital rushe plans to produce its own oxygen after supplies dwindled the height of the third wave. By TONY KARUMBA (AFP)

In April Kenya registered a record 571 deaths, and the health ministry warned hospitals were overrun with fewer than 300 patients in the Intensive Care Unit and fewer than 2,000 hospitalised countrywide.

"The reserve dwindled, it decreased to the point where we were collecting oxygen 24/7," recalled Gakombe.

At one point "we were down to six hours of reserves and that was a very, very worrying situation."

The grey-haired doctor admits that in his 27 years at the helm of the facility, he had rarely worried about the oxygen supply which was "something we took for granted".

But where a typical patient uses "two to 15 litres" of oxygen per minute, a Covid patient requires "up to 60 litres", he said.

"We wanted to make sure we were self-sufficient, not dependent on third parties to provide us with the oxygen we needed," he said, referring to industry suppliers, like Kenya's gas manufacturer BOC.

So the Metropolitan flew in machines from Germany, the United Kingdom, the United States and China to put together the oxygen production unit, which cost 100 million shillings (nearly 800,000 euros/ $935,000).

"Basically the plant takes in atmospheric air and separates the oxygen from all the other components," explains Davis Mareka, director of O2 International, the Kenyan company that installed the machines.

Metropolitan Hospital flew in machines from Germany, the United Kingdom, the United States and China to put together its oxygen production unit. By TONY KARUMBA (AFP)

The oxygen is "purified and dried to at least a purity level of 95 percent, which is actually the requirement by the World Health Organization".

The hospital also built a piping system that delivers oxygen directly to its rooms rather than using cylinders, which are also scarce.

Oxygen, which makes up 21 percent of the atmosphere, is vital in this concentrated form to save patients with severe forms of respiratory distress from Covid-19.

Several other private hospitals in Nairobi, like the MP Shah facility, have also set up or expanded their own production units.

Meanwhile the government launched a call for tenders at the beginning of March to supply 16 counties with oxygen, and has urged the repair of numerous production units that are "no longer working".

The availability of medical oxygen has become a critical issue in many countries, especially developing ones, with shortages in DR Congo, price speculation in Peru and a growing black market in Brazil.

In India, relatives hunt spare cylinders as their loved ones die waiting for oxygen in overwhelmed hospitals.

India 'gets us worried'

Kenya has a large Indo-Kenyan community and many citizens see India as a key medical destination for treatments not available at home.

The Kenyan government launched a call for tenders at the beginning of March to supply 16 counties with oxygen. By TONY KARUMBA (AFP)

"To see ... the Indian healthcare system overrun, overwhelmed, that gets us worried. India is a place we look to for an example of good quality hospital healthcare," said Gakombe.

India, like much of Africa, had been seen as spared by the worst of the Covid-19 pandemic, due to relatively low case and death numbers compared to many countries.

However, an explosion in cases which has seen India become the second-most infected country in the world, and horrifying scenes of hospitals pushed to breaking point, has put Africa on high alert.

The Africa Centre for Disease Control and Prevention has described what is happening in India as "very, very worrying".

Kenya has already detected the B.1.617 variant of Covid-19 that is one of the factors fuelling India's dramatic surge in cases.

The East African nation has vaccinated fewer than one million people.