Paris Perspective #10: Lutetia and the Foundations of Empire 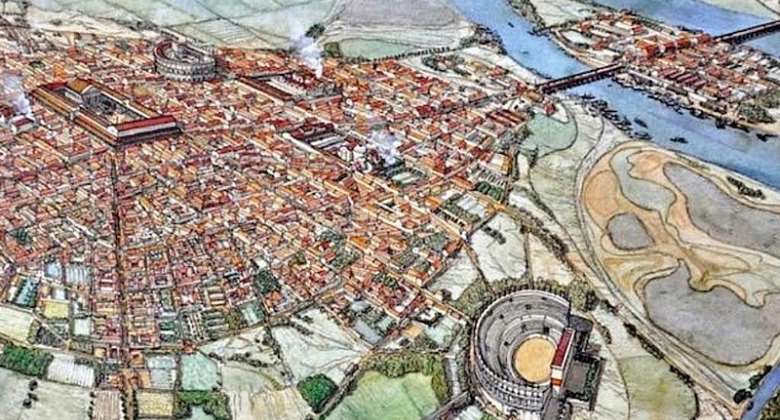 From garrisoned Roman outpost to modern European capital, Paris has had an eventful past. To understand its origins, Paris Perspective winds back the clock on the 2,000-year history of a city that started as a Celtic trading centre on a small island on the river Seine – before falling to the Roman legions under Julius Caesar's command - and its evolution through the centuries.

These days a tourist hotspot, Île de la Cité is the birthplace of Paris. Once home to the Gallic Senone and Parisii tribes, it was renamed Lutetia when, back in 52BC, one of Caesar's most trusted generals, Labienus, defeated the ancient Gauls in battle.

It was a decisive moment for the Roman Empire's conquest of Gaul.

The Gallic forces fought to the death after being routed by the Romans on the banks of the river Seine – heralding the inception of the Gallo-Roman garrison that would become the city of Paris.

To this day, the vestiges of the Roman grid architecture left behind by Labienus remain, having been incorporated into the fabric of the French capital over the past two millennia.

Whenever possible, Romans constructed their towns in a quadrilateral pattern, explains Chris Spence, Paris-based guide and conférencier. For administrative and tax reasons, Roman towns were divided into quarters.

One of the most important elements for the imposition of Roman authority was the Cardo Maximus. “It literally means 'main artery', and it was the hub around which they planned the Gallo-Roman city,” says Spence.

“In Paris, the high-point at the top of the Rue Saint-Jacques, by the famous Pantheon, we can see where the Romans use commanding heights, and this gentle plunging view down to the river Seine.

“This is where the Roman surveyors would have stood with their famous instrument – the groma – which would have allowed them to create this wonderful straight line."

Trade routes resonate through the ages

While the old Roman layout of Paris had mostly disappeared by medieval times, the Cardo Maximus was still visible, says Spence – who disagrees with those who say the decline of the Roman Empire saw the disappearance of infrastructure and road networks.

“When we enter into the early Middle Ages, we've got the growth of feudalism, and the idea the fabulous Roman road network that held the Empire together disintegrates and disappears. This has been proven to be false," he says.

“Recent studies have discovered that the Roman road network was, and is today, still very much in use.”

“With the spread of the Black Plague in the Middle Ages, it's well documented that the towns that were hit hardest by the pestilence corresponded perfectly to the old Roman arteries that connected them,” says Spence.

Yet the Cardo Maximus that is still visible in the French capital actually pre-dates the Romans and even the Gauls, having been recognised as a strategic route dating back to late prehistoric times.

“This [cardo] is superposed over a very, very ancient road, as this is the best crossing point over the river Seine for miles around," says Spence.

"Since the Mesolithic period and before, this has been the best way to travel north. This is an example of a road which has layers of history.”

Even the modern arteries of Paris – its famous boulevards – are a genuflection to the Romans.

“Let's not forget, it was the nephew of Napoleon Bonaparte – Napoleon III – who revived a grid of Gallo-Roman Paris on the left bank by re-cutting the Boulevards Saint Michel and Saint Germain," Spence reminds us.

"In the Middle Ages this was a chaotic rabbit-warren, lacking any urban planning."

Some 600 years before Napoleon's reign, the first true King of France, Philippe Auguste, was also inspired by the ingenuity of the Roman Empire and its defences.

“Philip Auguste loved Paris to the point that, when he left for the Crusades in 1215, he built a formidable wall to protect the city from the likes of the English,” says Spence.

“The building style is 'Roman' and in the early 13th century the style is identical [to Roman architecture], where you've got an infill of rubble held together by a cement with dressed stone on the outside.

“It is the best-preserved defence system that is still visible in Paris today.”

Central to Paris's growth over the past 2,000 years have been the construction materials on hand to its various rulers.

“The stone of Paris – the signature building stone – is a beautiful limestone. Lutetia was very rich in natural resources, which is one of the reasons why it exists," explains Spence.

“To crown it all, you also have the vast forests of the Somme, and river transport to get the timber to where you need it, and gypsum from Montmartre – used to make plaster of the highest quality. There's everything you need.”

With access to these materials, the Romans consolidated their garrison of Lutetia from the year 30BC. Over the subsequent centuries they built a forum, arenas and baths – which remain the last vestiges of Roman architecture visible above ground.

What can be seen in Paris's Latin Quarter are the remains of the 'frigidarium' – the cold baths of the Roman bath complex.

“The structure can be dated quite nicely by the combination of building materials, where you've got stone blocks interrupted by lines of tiles," says Spence. "This is typical of Roman building styles around the first century AD.

“It's north facing, which is the clever thing about keeping the frigidarium cold, with only one window, that's very high up, taking in any reasonable amount of daylight.”

“The water would have gushed across a mosaic tiling, over the surface of the mosaic floor, giving it a double cooling effect. The mosaics didn't survive, but we still have the Roman materials that have come down to us.”

All empires rise and fall – no matter the resources, infrastructure or strategic location – and the glory of Gallo-Roman Lutetia was waning by the 3rd century AD, as can be witnessed by the materials used in defensive walls visible on Paris's Île de la Cité and the crypt of Notre-Dame Cathedral.

“When you go to the crypt and inspect the stones carefully, you can see that some are recycled from the Roman arenas, because they have the name engraved of the prominent citizen who had his own reserved seat," says Spence.

“It shows that they recycled architectural elements from the Left Bank – the heart of Gallo-Roman Lutetia – and they made a 7-metre wall in a big hurry.”

Following the murder of Roman Emperor Septimus Alexander in 235AD, succession of the Empire was thrown into chaos. This era is recorded in history as the Imperial Crisis.

“What you have is competing Roman generals within their own armies looking to become emperor, and this throws the Roman Empire into turmoil," explains Spence.

"You've got an incredible turnover of emperors – no less than 26 in the space of 50 years – each trying to promote their own personal ambitions.”

Watching the fabric of the Roman Empire unravel before their eyes, the neighbouring Goths, Visigoths and Alemanni start crossing the Rhine.

Lutetia was wealthy and vulnerable.
“The advantages of Lutetia for trade – its communications, river systems, road networks – now serve as a weakness because those Germanic tribes see this city on the Seine as accessible," says Spence.

With the decline of Rome and the arrival of the Germanic tribes, the influence of the Caesars would give way to the rise of the Franks, paving the way for Philippe Auguste to bring the Gallo-Roman city of the Parisii back into the fold as a European metropole.

With France this month marking the 200th anniversary of the death of Napoleon Bonaparte, it is clear that the country's most famous emperor stood on the shoulders of his predecessors, who laid the foundations of empire.

Written, produced & presented by David Coffey
Recorded, mixed & edited by Vincent Pora
Chris Spence is a certified Paris guide and conférencier on the history, culture and lifestyle of the French capital.