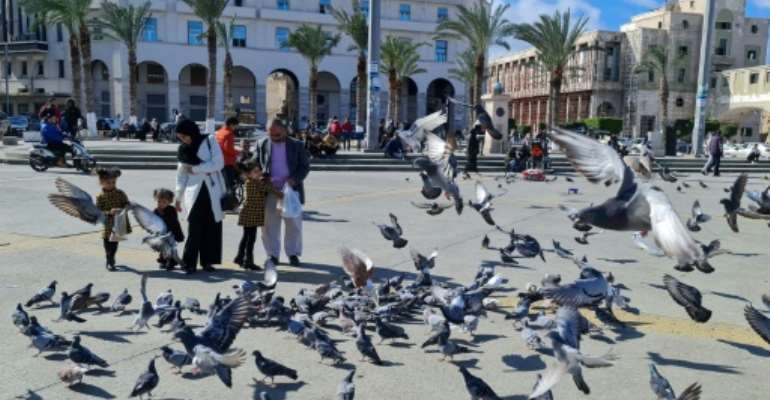 A family feeds pigeons in Libya's capital Tripoli on Tuesday, as politicians discussed the future structures of government in a bid to build peace in the long-troubled nation. By Mahmud TURKIA (AFP)

Libyan envoys at UN-backed talks to end nearly a decade of war voted Tuesday to pass the mechanism to choose an interim executive to govern until polls in December, the UN said.

The UN called it a "significant step forward".

Oil-rich Libya has been torn apart by civil war since the NATO-backed uprising that ousted long-time dictator Moamer Kadhafi in 2011, with an array of militias filling the vacuum and civilian bodies struggling to impose their authority.

But talks held in the Swiss city of Geneva have brought together 75 delegates -- selected by the UN to represent a broad range of constituencies -- in the Libyan Political Dialogue Forum (LPDF).

"Following the agreement on a proposal for the selection mechanism of a unified executive authority... the United Nations Support Mission in Libya (UNSMIL) conducted a one-day voting process," the UN said, with the vote running from Monday to Tuesday.

A total of 73 percent backed the proposal.

"Libyans have now a genuine opportunity to move past their differences and divisions, (and) select a temporary government to reunify their institutions through the long-awaited democratic national elections" on December 24, interim UN envoy Stephanie Williams said.

The UN was "finalising the nomination procedure" and an election timeline, she added.

Libya is currently dominated by a unity government in Tripoli that emerged from previous UN-led talks in 2015, called the Government of National Accord (GNA), and its rival, the eastern-based House of Representatives elected the previous year and which never recognised the unity government.

Also on Tuesday, members of the commission drafting a future constitution met with delegations from the House of Representatives and the Tripoli-based High Council of State, which advises the GNA.

The meeting in the Egyptian Red Sea resort of Hurghada was held to "discuss the constitutional arrangements necessary for the holding of elections on December 24," the UN said.

"If you fail to reach an agreement, this will have very negative repercussions on the other tracks including the security and economic situation," Williams told the delegates.

Both camps in Libya's complex war have received extensive backing from foreign powers.

A fragile ceasefire between the two sides, agreed in Geneva last October, has largely held despite threats by eastern military strongman Khalifa Haftar to resume fighting.

But Guterres also urged "regional and international actors to respect the provisions of the ceasefire agreement", with its three-month deadline to withdraw foreign forces from Libya expiring on January 23.

The UN estimates there are still some 20,000 foreign forces and mercenaries in Libya helping the warring factions.