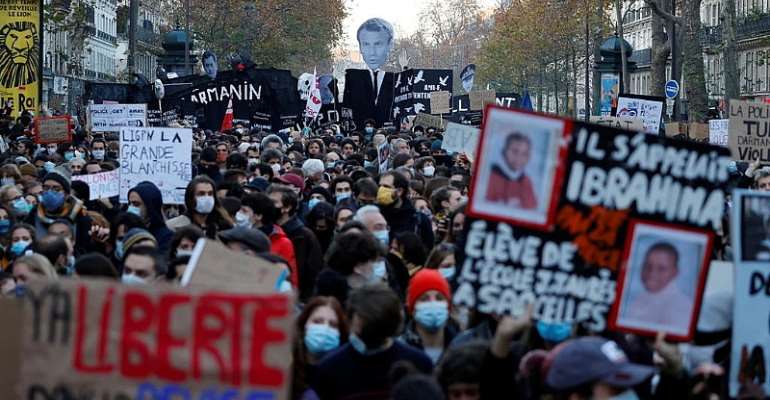 Thousands of people have taken to the streets across France to protest a controversial new security law that would restrict the right to publish images of police officers on duty. Some clashes broke out amid tense scenes with debate on the issue boiling over after recent incidents of police violence.

The protests took place against the background of the beating and racial abuse of a black man by police officers that has shocked the country.

Protesters crammed the Place de la Republique in Paris which witnessed some unrest. “Police everywhere, justice nowhere” and “police state” and “smile while you are beaten” were among the slogans raised during the protest in the French capital.

The Paris authorities had demanded that organisers limit the rally to a single location, but on Friday evening officials authorised a march from Place de la Republique to the nearby Place de la Bastille.

The incident had magnified concerns about alleged systemic racism in the police force. An investigation has been opened against the four police involved but commentators say that the images – first published by the Loopsider news site – may never have been made public if the contentious Article 24 of the security legislation was made law.

The article would criminalise the publication of images of on-duty police officers with the intent of harming their “physical or psychological integrity”.

It was passed by the National Assembly although it is awaiting Senate approval. Under the article, offenders could be sentenced to up to a year in jail and fined 45,000 euros for sharing images of police officers.

The government says the provision is intended to protect officers from online abuse and has been intensely lobbied for by police representatives.

But media unions say it could give police a green light to prevent journalists – and social media users – from documenting abuses such as those against Zecler.

In a sign that the government could be preparing to backtrack, Prime Minister Jean Castex announced on Friday that he would appoint a commission to redraft Article 24.

But he was forced into a U-turn even on this proposal after parliament speaker Richard Ferrand – a close Macron ally – accused the premier of trying to usurp the role of parliament.

In the western city of Nantes, police said around 3,500 rallied, while organisers put the crowd at 6,000-7,000. In Montpellier, officials said 3,800 people were demonstrating while organisers said there were 5,000 people. On Bordeaux, the official figure of the number of protesters stood at 6000.