Political Musings: What Prof Naana Jane Didn't Or Show You 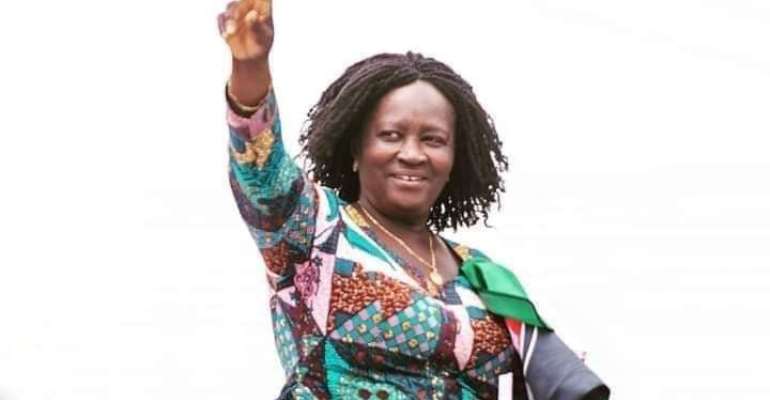 ...Kabu Nartey writes from Bono East Region
She dislikes showing off. She hates staging emotions. Shes's politically incorrect, brutally frank, pleasant in manners and very attentive to every single happening or happenstance. Always speaking the very ordinary language in sync with the day to day ordeals and realities of her kind, children and men alike.

Very sensitive to the ethos of the game. Scenario 1: At the Children's Hospital in Accra, she asked for an off camera engagement with parents who had just received bad news.

Very impuslive and spontaneous, emotions are so infused with the message , material moment and euphoria. Scenario 2: Her birthday dances moves were legendary. On the grounds she dances when she has to, sings when she has to and disagrees with opponents when she has to. Careful, she'd lecture you right now should you ask for it - very well-read and resourceful on multidisciplines- ranging economics, health , religion, communication and the concept of development. But when it's your turn, she listens so attentively.

Scenario 3: Her repetitive calls on leaders to be tolerant but firm , fair but firm is memorable and appropriate in an increasingly intolerant society. Certainly, a new norm in living in peace and harmony without compromising on society's values and personal dignity.

Until today, many doubted if a woman in her 60s could crisscross the nation with so much brisk, energy and rambo-style. One feared if she could be grassroot. One feared that even if she could, the arrogance and protectorate approach that her handlers would adopt could end up repelling the grassroots.

Today, the Veep Candidate has proven the opposite. Just like any human, she shows fatigue but overcomes them to keep talking to the people and leaders of the society, pitching the superiority of her party policies.

Scenario 4: She insists on socializing with her team even though very tired from a number of tours and speeches.

Professor Naana Opoku-Agyemang may have proven many wrong on the above and many fears, showing much humility despite her colossal academic stature.

Agreeably the most charismatic and most loved female 'politician' you'd find in Ghana's body politic today.

But with all observed , said and done, ultimately, will the people be gracious to her and her party on December 7 - #2 ?

13 days to Elections!
The author ,Kabu Nartey is the GJA Student Journalist of the Year ( 2018) ; a Political Communications Strategist and a Kufuor Scholars Fellow. Kabu is the author of a soon-to publish political book on his late father, his family struggles and his struggle during the Revolutionary days under the late J.J Rawlings - "A President in Exile"

Inside Politics: Political Quotes
Catch up with all the political quotes from our politicians.
Sponsored
More Opinion
Modern Ghana Links
Kojo Nyantekyi – Tribute To A Brother
Our educational system; The paradigm
As charismatic as Rawlings
The President should further scrap these other ministries
How Modern Imperialism Is Sophisticated and Hidden
An appointment well-deserved—Hon Dr Hafiz Bin Salih
How WeChat is used as a surveillance tool
Covid-19: Hydrogen Peroxide provides immediate protection
Akufo-Addo makes appointments with an eye on Parliament
Election Reports Quotes Dossiers
TOP STORIES

There is possibility of a lockdown, other restrictions – Opp...
52 minutes ago